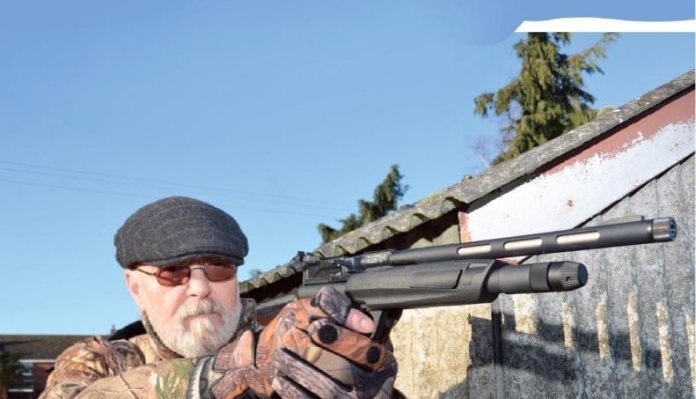 Umarex is a big name in modern airguns and are best known for their extensive range of CO2- powered replica firearms manufactured under license. On test here is a total departure from that remit, as the new RP5 is quite clearly an airgun. They make some bold claims with this model, so let’s cover the basic specification first.

We are told; the RP5 was designed to ‘suit the needs of a high-powered pistol and a vermin control carbine’. The design sees a pumpaction operated, 5-shot bar magazine system, however, it can also be single loaded too, with the magazine removed, so it’s flexible for sure. There’s a choked and shrouded barrel, a unique CO2 valve allowing for higher power, and a modular system which can accept accessories. Open sights as standard and a 2-stage trigger complete the spec; so overall, an interesting prospect, on paper at least.

The RP5 is a perfect example of what Umarex are all about. Solid build, fine machining, and precise finish, all play their part, and it’s difficult not to be impressed. The pistol grip is ambidextrous, offering a simple, yet functional design. The long forend acts as the pump slide to cycle the action. A stylish, full-length barrel shroud really looks the part, and the muzzle is threaded for a silencer with a protector. It’s supplied with a smooth bore barrel, which is TG choked (Target Grouping) at the muzzle, a feature unique to the UK model. The idea, accuracy should be better than a standard smooth bored CO2 pistol, we shall see!

It runs on 2x 12g CO2 capsules, which are pierced when installed in the gas-proof chamber under the barrel. To charge, unscrew and remove the knurled collar at the front of the chamber.

Now insert the first nose-down and the second, nose up, so they sit back to back. Screw back the cap gently, further rotation will pierce both 12gs and seal the chamber; you will hear a hiss as this happens and you’re ready.

Filling the 5-shot magazine is next; here, a pellet is dropped nose-first into the aperture within the feed block and, as each one seats, push the spring-loaded clip right to left to reveal repeat until full. Now press the button in the right side of the forend, and at the same time pull it until it clicks. The mag can now be dropped into position, or a single pellet loaded directly into the breech. Click the forend forwards and the shot is ready.

A word of caution; my first feeble attempt to pierce the capsules hadn’t fully done the job, and the first couple of shots had hardly any power, leading to a pellet stuck in the barrel. This is one of the pitfalls of CO2 power, so a cleaning rod is a sound investment, to clear any jams. I then compounded my pain, whilst thinking that unscrewing the barrel shroud was a good idea, only to be left holding it and nothing else, the RP5 dropped with a whoosh, straight onto concrete from about five feet up! And as if to make a statement about the sheer robustness of the design, the only damage was the tab of the rear-sight, which cracked and flew off, clearly having taken the full impact, as no other mark showed, lucky. Pride slightly dented, as was the sight, I gave a little extra twist of the pressure cap, and power was fully restored.

My glaring gaff apart, this RP5 really is great fun to shoot. With the magazine onboard, shots can be released just as fast as you pump the action and pull the trigger and the mechanism worked faultlessly on test. The two-stage trigger is smooth and reasonably light too, all adding to the level of satisfaction on offer.

Moving to the performance figures, Umarex says power is way over what can be expected from the normal CO2 fare, utilising 12g capsules. Par for the course is around the 2ft/lbs mark, yet thanks to the unique valve system on this model, energy levels are distinctly higher, with my tester hitting 4.2ft/lbs at its highest point, with the ammo on test.

Again, with the valve system charging the whole cylinder, shot to shot consistency is fair too, when taken over the early part of the charge. 35fps total spread over 50-shots, is very acceptable, whilst this admittedly opens right out when monitored over the full 73-shots recorded. Any talk of performance has to be tempered with the point that CO2 is always going to be primarily fun shooting, and that to expect textbook results is to seriously miss the point. Ostensibly, fast fire effortless enjoyment. Don’t forget to factor in the cost of the 12g capsules at between 60p and £1 a go.

Results on test were impressive and shooting the RP5 rested and with the open sights, I achieved easy groups coverable with a 10 pence piece over 20-yards, and a ragged enlarged cluster over ten, with a pistol scope fitted easily added courtesy of the mini dovetail rails around the breech.

I’ve always loved the idea of a shoulder stock, and Umarex take full advantage with the RP5’s modular approach stretching to a butt, silencer, and accessory mount. At £259.95, I reckon it’s a lot of pistol and a whole lot of fun into the bargain. Extremely well made, and a great piece of design, aimed at the genuine airgun enthusiast.