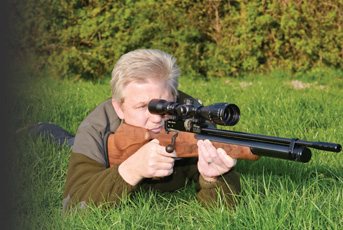 One of the newest names on the scene, Staffordshire-based Prestige Airguns has rightfully won an army of fans almost immediately thanks to their philosophy of providing quality service with quality products. Although there are some exciting new projects in the pipeline, it’s the company’s launch rifle that I’ve been shooting over the past few months – a.k.a. the Prestige Kub.

I’ve actually been involved with many of the elements incorporated into the rifle’s design since its inception, so I’m pretty familiar with the Kub’s inner workings, not to mention its performance – and the rifle seen here has notched up a fair few thousand rounds without any problems. Prestige back all their rifles with a one-year warranty and test every gun before it gets the official ‘Prestige Seal of Approval’. In this day and age, when so many companies run a ‘box in – box out’ philosophy, all this extra attention Prestige give their products is extremely reassuring to the end user.

Prestige supply their Kub in either a Sporter or Thumbhole stock, and both configurations are ambidextrous. The shape and feel are pretty similar, being quite slim-line with a gently rounded fore-stock and a neatly profiled cheek-piece on both sides of the undercut butt.
Well-cut laser chequered panels adorn the grip and fore-end, the latter being quite stylish as well as practical. More practicality comes at the butt, which features a height-adjustable rubber pad. Besides being super ‘grippy’ in your shoulder, this vertical movement also affords you excellent gun fit when you’re forced into taking an angled shot. By keeping the keeper screw only moderately tight, you’ll be able to slide the pad up and down ‘on the fly’, tailoring the rifle’s mount to your specific needs in a jiffy. I found this particularly useful for field work against tree-top pests.

The Kub is a very compact sporter, being short, lightweight and pleasurably slim. But it’s not by any means cramped to bring to the shoulder, with the stock’s geometry being perfect for a steady, sporting hold. The thumbhole, though ambi, is perfect for shooting right- or left-handed, and the grip’s rake is spot-on for a good trigger attack.

Action-wise, the Kub is beautifully engineered and certainly worthy of its higher-end price tag. Prestige are offering their inaugural model in three guises, each of which is designated a suffix in the model name. The model on test was a Kub-SB – a side-bolt cocker – but you can also get a Kub-RB (rear-bolt) and Kub-SL (side lever). According to its livery, prices range from £549 (for a Kub-RB Sporter) to £639 for the top-of-the-range model I tested.

At the moment, the Kub is only available as a 10-shot, magazine-fed rifle – but I’ve heard that its performance has been good enough for HFT-ers, who prefer single-shot hardware, to give it a go.

For me, however, I’d rate the Kub as an out-and-out hunter – and the SB model is the perfect set-up to have in the field. The bulbous bolt not only looks the part, but it’s highly ergonomic, too, allowing you to cycle the shot very easily indeed. It’s very smooth to operate, cocking the hammer and automatically indexing the magazine on the back-stroke, whilst breeching the pellet on the return. However, it’s certainly better to give it a bit of ‘what for’, because if you try and operate the Kub’s bolt too gently, you’ll probably fail to engage the trigger sears on the first pull.

If this happens, you’ll have to re-cycle the bolt – but you’ll then load a second round up the spout. However, if the bolt has been correctly operated, it’s impossible to double-load.

Although you can move the curved blade rearwards 5mm, I can’t see any need for doing this unless you’ve got really tiny hands, but there’s plenty of other adjustment to accommodate even shooters as fussy about their triggers as me!

You can slightly angle the blade, alter the length of first travel, the amount of sear engagement and pull weight. The trigger’s pull weight can be set quite light, which will certainly suit those considering the rifle for HFT work – and it’s certainly got plenty of match accuracy, even if it is meant to be a dedicated field rifle. There’s a very comprehensive Kub Owner’s Manual – a properly printed affair rather than a few, badly photocopied sheets of A4 – that explains how to do all this, along with plenty of other helpful advice on getting the best from the rifle. Anyone can view this manual on Prestige’s website (www.prestigeairguns.co.uk).

The barrel is a German-steel blank that gets rifled and choked in Korea. I’ve seen the process being done and was impressed by it – but not half as impressed as I am with the groups it gives. The .22 test model can stick a magazine’s worth of Air Arms Field or Crosman Premier inside a 30mm circle at 40metres pretty effortlessly, although as with all multi-shot rifles, a little care and attention when loading the mag pays dividends down-range when you come to shooting it. The muzzle is threaded and comes with a muzzle weight, but an optional Prestige deciBlocker sound moderator is also available (see this month’s News).

Removed (with the bolt held open) from the right-hand side of the breech, the Kub’s 10 shot rotary magazine is a very well engineered component, and the pellet feed probe has been properly shaped to ensure the pellets transfer from their holding chambers to the breech with minimal deformation. I have retrieved shot pellets from a box of rags and can confirm that the auto-indexing system works perfectly, with no tell-tale signs of pellet shaving to indicate a non-concentric feed.

The lever safety catch, which clicks on and off, is set manually and can be re-set at any time. After a few hundred shots, mine started to feel a bit loose, but by tightening a small grubscrew (this is immediately obvious once you separate wood and metalwork with the single stock-fixing screw), its positive operation was once again re-affirmed.

Regarding D-I-Y maintenance, I also needed to change the front O-ring on the supplied quick-fill charging probe. Somehow it got damaged and failed to seal properly a couple of months into the test. I’ve experienced this problem on other similar systems in the past, but a quick call to Prestige got it all sorted. The moral of the story here is to look after your charging gear.

On the subject of filling, the Kub’s charging procedure couldn’t be simpler. Turn the rotary dust cover to expose the filler port, plug in your probe and charge to 200bar. Seemples!
The Kub boasts an on-board air gauge under the fore-end. It’s handy for keeping an eye on how much air is in the rifle but, personally, I don’t like to rely on these integral gauges. They’re never as accurate as the one fitted to your air bottle or charging pump and can sometimes be ‘lazy’. That said, my test gun’s was dead-on.

A 200bar maximum fill actually returned 135 shots (with .22 AA Field), with a high-low power curve of 11.6 to 10.8ft/lbs. I’ve tested .177 Kubs, which have usually returned over 120 shots (with Bisley Magnum) and must say that, considering the compact size of the Kub, it’s a staggering return. Clearly the Korean-designed main firing valve system is extremely efficient.

Having used the Kub-SB extensively in the field over the course of 2009, I have been extremely impressed by its ease of handling and performance factor. Prestige Airguns has entered the marketplace with a very high bench mark indeed and is sure to become a big name in a very short space of time.