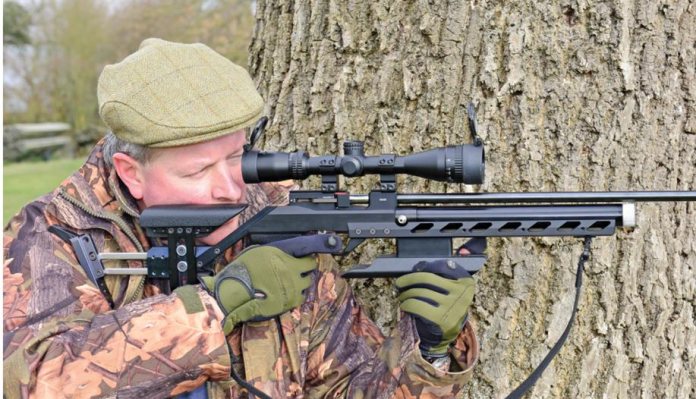 With outdoor airgun competition disciplines such as Field Target and latterly Hunter Field Target, as popular as ever, it’s an encouraging state of affairs. Inevitably, as interest has grown in these sports, so the availability of dedicated equipment has widened, with the result that today, several manufacturers produce specific models aimed at the serious shooter, who wants to aim high.

Aeron are a manufacturer based in the Czech Republic, and are relatively new to the UK market; but with the advent of their first pre-charged pneumatic (PCP) rifle and a distribution deal with Sure Shot Airguns, that all looks set to change.

The new Black Mamba rifle (let’s get the school boy sniggers out the way now!) comes in three different versions: Ultimate FT, which features a longer cylinder, more elaborate stock raiser block, and a counter weight bar as standard; Ultra HFT, on test here, and the Bench Rest, which has the long cylinder, and a flat forend base.

My big interest is Hunter Field Target (HFT) shooting these days, so I was pleased to receive the HFT model for testing, which we see here. All three models share many of the specifications, including two stage, match-style trigger, fully floating barrel, pressure manometer, side-lever action, modular wood/aluminium chassis, quick-fill design, and power adjuster, more of which later.

Modular stock chassis designs such as this may not be to everyone’s taste, but the aluminium central assembly looks and feels well engineered. The stock has three wooden sections- the cheek piece, the front stock raiser, and the pistol grip. All three are adjustable in some way, and the wood can be specified in black, beech, red, or laminate. The grip can be ordered left or right handed too, so the dreaded word ‘compromise’ is minimized.

This HFT model shown here, comes with a wooden front forend raiser block, which can be moved along its axis on the full length accessory rail. The Ultimate FT option differs here in that it comes with a raiser/ rest that is fully adjustable for angle too. Fancy the hand grip further back or moved further forwards, and it’s all possible with this rifle, at the twist of an Allen key, up through the bottom of the grip itself.

And so we come to the cheek-piece - so important for maintaining correct eye/scope alignment. Again, various Allen screws can be moved or loosened, and the cheek panel can be then moved up, down, forward or back. Length of pull can be altered by adjusting the rear butt hook, again via Allen bolts and those twin rods- adjustable either for length or angle; and we’ve not even got to the trigger, adjustable for reach, length, angle and pull weight.

No doubt all a step too far for some, but for the serious competitor who wants to maximize performance, there really is no doubting the worth of all those possible adjustments to be made, all in a bid to getting the feel and fit just right for the individual.

So we’ve familiarized ourselves with the elaborate stock design, now it’s time to charge the cylinder to the prescribed fill pressure. Here, Aeron specify that the Black Mamba can take 220bar, but 200 is quoted as being perfectly adequate! Quick fill comes with the Foster-style male valve inlet on the side of the action. Whilst this design works well, I did find the valve being located in this position a little irritating, since it requires the gun to be supported on its side, so as not to stress the airline cable. A more favourable location for the valve would be underneath the action, so the gun could be just laid down during charging; a small point, but worth making!

Another interesting observation was that as the gun was delivered, the residual pressure had been allowed to drop to around 60bar- way below the regulator pressure.

From this point, I was unable to start charging the action with a hand pump. Switching to a bottle with a fast air feed, managed to kick the valve open, but the moral is – don’t let pressure drop too low. In fact, stick to the guide of the green section marked on the pressure gauge, which denotes 100 bar, and you won’t be able to go far wrong.

Cocking the Black Mamba’s action is via that super slick side-lever, and once drawn back, the pellet is chambered directly into the lip of the rifling- the perfect system, allowing the shooter to feel a good or bad fitting pellet. Air delivery comes from directly behind, so efficiency looks good on paper at least. In practise, there’s a slick, quick feel to the shot too, which all aids confidence.

Trigger-wise, the overall feel was very good, but an honest assessment would conclude that the unit maybe lacks that final sensitivity of some top flight match systems available. I’m talking comparison with Olympic grade kit here though, and as it stands, this is still a highly effective two stage trigger.

Aeron fit a power adjustment screw to the side of the action, and I have been assured by the importers that these guns will feature a small amount of adjustment, but that it will not be possible to exceed the legal power limit.

So just how do these rifles shape up? Well I decided to fit a silencer to the floating barrel, for no better reason than that it was supplied as an optional extra, and I have grown accustomed to a quieter rifle these days. Many HFT fans will rush out and fit an after-market air stripper of some sort- (standard on the FT version incidentally) so popular in FT/HFT circles, yet my testing has revealed little difference in performance, irrespective of the route taken. With a rough zero achieved, I moved to 35 yards, and over this distance, and shooting the recommended JSB Exact ammo, I recorded several seriously tight clover leaf groups, measuring ¼” centre-to-centre; textbook stuff indeed!

Chronograph readings were equally encouraging, and from the established 200bar fill, I clocked 85-shots within 15fps total spread. Bang on the button basically! Handling-wise, the feel and look can be a bit clinical, with all that mechanical Robocop configuration on show- yet get past that, and there’s no doubting the theory behind this gun.

As a point of interest, the counterweight bar that comes as standard with the Ultimate FT specified rifle, can also be purchased for a highly reasonable £20 as an optional extra. The bar is threaded, and simply screws into the base of the butt hook.

Bear in mind just how demanding a discipline HFT has now become, and it’s clear that any airgun deemed suitable, needs to have serious accuracy capabilities, in order to hit those pesky small kill areas on the target. Having shot this Aeron extensively on test, I was left in no doubt that it has what it takes to compete head on. Small group sizes through the ranges is one thing, but text book consistency, total spread and shot count through the cycle of the charge, all left me mightily impressed.

In short, the Black Mamba Ultra HFT has to be hailed a success, with a host of adjustable elements, and serious downrange performance, it’s difficult to fault Aeron’s thorough approach to product development.