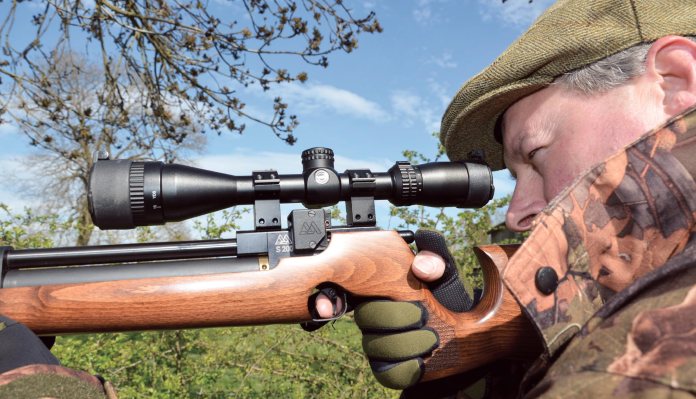 The S200 has proved a successful model for Air Arms, and when you consider it was first launched with that slightly ugly two-part stock configuration, the latest incarnation is a world apart. Launched as a joint project with CZ in the Czech Republic, it has gone on to earn its place in the Air Arms product line-up; appealing to many with its sleek, no-nonsense design. As a lightweight Sporter with an interesting semi-target design, the S200 can be equally at home on the target range or filling a game bag – and that’s a point not lost on an army of shooters, that choose this model for their customisation work.

As standard, the action is single-shot, but if multi-shot designs appeal, then Air Arms now supply a conversion kit, to turn this popular model into a fast-fire multi-shot, with a 10 shot capacity. I’ll be getting to grips with this in a moment, and if I can fit it, with just the two Allen keys provided, then it’s a simple task believe me. First, we’ll just remind ourselves of what the S200 has to offer.

The latest ultra-slick one-piece stock design undoubtedly gives this model a classier feel than its predecessor, and to all intents and purposes it is ambidextrous. In fact, you have to look closely to see the only right hand dedicated feature – the small cut-out around the bolt handle. My test model showed very attractive grain pattern, and with an ideal flexible rubber buttpad fitted, finish overall is pretty good. The drop-down, near ninety degree pistol grip has stippling applied, and the feel of this, coupled with the high stock comb, combine to great effect.

The S200 is designed to be charged in the conventional way, via the valve at the front of the cylinder, with the cylinder still in situ. However, the cylinder can be simply unscrewed, allowing for inspection; and herein lies a small niggle, since I have noticed that the cylinder on this model can become loose a little too easily in its housing, which is irritating. This especially occurs when trying to unscrew the valve cover at the front. Some sort of rubber grip or more substantial ‘o’ ring would make sense.

As for the charging process itself, this is helped enormously by the reassuring site of Air Arms’ T-bar valve, surely the safest system on the market, as the air line is locked into place for the duration. With the prescribed 200bar on board, fitting a scope was the next stop.

In a bid to keep the overall weight down with this model, the breech block is kept short, making everything a little cramped. Because there’s only a short run of dovetail rails on offer, the S200 also comes fitted with a small block, which fits directly around the barrel. The block has dovetail rails along the top, and at the turn of an Allen key can be slid along the barrel to effectively increase or decrease the distance between the scope mounts. It’s a neat setup, and works well in practise.

Looking to the fully adjustable trigger, the plastic blade is a little fragile with a very narrow tip but it is also adjustable for position along its mounting block, which is a big help in getting the fit just right for the individual. At this point, it should be noted that Air Arms sent this gun through without the muzzle end-piece fitted, but I’ll let them off, since I had asked them to fit the multi-shot conversion kit, which effectively interrupted the normal assembly line. Subsequent inspection revealed just how easy it is to fit the magazine system, however, so I dismantled the parts, to demonstrate the order of assembly. Full instructions are of course supplied with the kit, but here’s how it’s done in any case.

To fit the magazine kit, cock the bolt, and unscrew the two hex bolts holding in the existing loading tray. Hold the bolt back and remove the tray. Then push the main magazine block into the slot with the Air Arms logo showing to the left side. At this stage, I found pushing the rifle’s bolt forwards and home, helped hold the block fully true, before proceeding.

Now slide the additional small block supplied onto the dovetail scope rails from the rear (with the two threaded holes at the front) until it is pushed right up behind the main assembly. Tighten this in place with the side screw, taking care not to lose the small nut recessed on the other side. With the small top cover plate in position, with its lip at the back, tighten down the two top screws provided.

You’re almost ready for action. Fill the 10 chambers of the rotary magazine in turn, and finally, with the rifle’s bolt fully cocked and rearwards, line-up the grey painted chamber of the mag with the top right corner of the block, and insert the magazine.

Subsequent cycling of the bolt handle will index the next shot, and in practice I found the system worked faultlessly on test; being both pleasantly smooth, and reliable. As is so often the case with instructions, the fitting process sounds a lot more fiddly and involved than it really is. Take a look at the small number of parts involved though and it should be clear that it’s a straightforward operation and well within most people’s capability.

Shooting this rifle did reveal quite a muzzle crack, and I would recommend the addition of a silencer. Over the chronograph, and using Air Arms’ own branded Diabolo Field ammunition, the S200 put in a good showing.

From the manufacturers’recommended 200 bar fill pressure, I recorded 71 shots with a total spread of 30fps, which is very acceptable, given this model is unregulated. As per my usual recommendation with this type of rifle, experimentation with slightly lower fill pressures may well pay dividends for a band of shots within a tighter velocity spread. Competition shooters will always look to maximise performance, and give themselves an edge in this way, but for most shooting scenarios, standard performance from the full charge will be bang on the money.

In terms of accuracy, over 30 yards and from a totally stable bean bag rest (which properly tests the action and not my skills), I could fairly easily achieve genuine quarter inch c-t-c groups, which speaks volumes for this guns potential. It also confirms the integrity of the magazine conversion kit, so all told, satisfying results.

Off-hand shooting (where I had to do my part!) showed this gun’s versatility and ease of use, and it’s easy to see why the S200 has proved so popular with ladies and juniors alike, on the FT and HFT competition circuits; which after all is a serious proving ground for any hardware these days!

A combination of super compact design and genuine accuracy potential come together well with this model, add in the well thought out (and easy to fit) multi-shot conversion kit, and this becomes a tidy package, well up to the task.