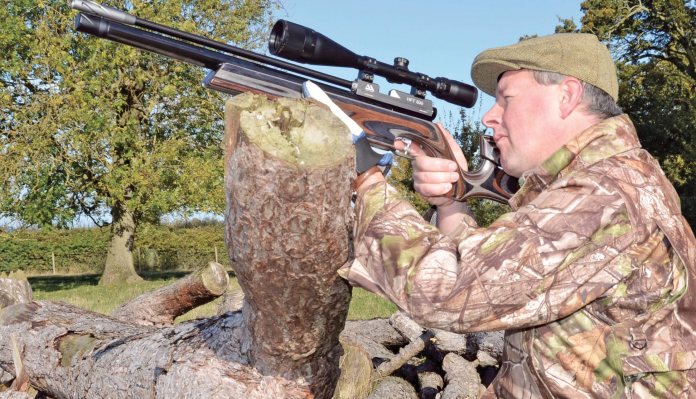 A new airgun launch is always a cause for celebration, yet when it comes from Air Arms, and the gun in question is aimed specifically at the sport of Hunter Field Target shooting, you must forgive me for getting a little over excited! For what we have here is a brand new model from the Sussex-based manufacturer - the HFT500, and I have to tell you, it’s quite special!

As our biggest home-based airgun maker, Air Arms have generated a loyal following, but the strong fan-base has been well-earned. A history of listening to their customers, employing top designers, and incorporating ideas from top shots in the field, has paid dividends, and trophy cabinets up and down the country are testament to this winning formula.

When the FTP900 replaced the highly successful EV2 FT model, the company made a point of stressing that their new flagship was equally aimed at HFT. In reality, it’s a full-match grade machine, with proportions far more at home on a Field Target course. Transfer it to an HFT layout, and it can prove a little cumbersome; at 11lbs unscoped, the sheer mass is a consideration for many.

The point was made, and Air Arms’ response has been to develop and produce a separate model for Hunter Field Target. When that happens, you know the sport has arrived for sure. Ironically, I’m back with my FTP900, which I will be sticking with as it just feels right for me, but the arrival of the HFT500 means Air Arms now have a dedicated model for each discipline.

A fully adjustable stock, floating barrel and side-lever cocking action all looks great on paper, so let’s get up close and check out the rest of the mouth-watering features list!

If the HFT500’s profile looks vaguely familiar, that’ll be due to the fact that the stock is lifted from the Ultimate Sporter model. Minelli in Italy produce the stock, and with the multicoloured laminated wood treated to an attractive matt lacquer, the end result lends a high-quality feel overall.

The advantages of laminate as a medium, are well documented, with the ability to resist warping through temperature extremes, possibly topping the list. It is, of course, ultra dense, and this adds weight over many conventional timbers. That said, this model tips the scales at a whisker over 7.5lbs, which makes it highly manageable for most.

Several features are incorporated into the woodwork, to enable the competitor to fine-tune the set-up until eyescope alignment is achieved with minimal muscle strain. To this end, the cheekpiece is fully adjustable, and with the new ball joint at its heart, height, cant and angle can all be set exactly to suit. Carry out this operation in conjunction with the adjustable buttpad and an optimal shooting position should be possible. The butt section can take additional spacer plates too, so length of pull can be altered.

Under the forend, an accessory rail has been recessed where counterweights, a bipod, or a stock raising device can all be added.

Moving to the action, this model incorporates the FAC length cylinder, and with a greater volume of air comes an increased shot count. I’ve competed on and off with an Air Arms S400 with the same extended cylinder for some time, so I’m only too aware of how well-balanced this configuration can be.
Two key features really catch the eye with this model though for me. Firstly, the side-lever cocking action, taken from the S510 model, is here, but in a single-shot configuration. The grey breech block looks particularly attractive too, which all adds to the smart looks. That lever is just so sweet and delicately weighted in operation, and wins over a bolt every time for me. Secondly, this HFT500 has to be the first PCP from Air Arms sporting a truly floating barrel. I can only think that someone in the company’s board room kept vetoing the idea, shouting: “You don’t want to do it like that!” Only many of us DO want them to do it like that! No front brackets, no supports – just a sufficiently beefy barrel (Lothar Walther of course) to support its own weight, and an extended breech block to boost structural integrity.

So what’s all the fuss about? Well, with PCPs in the early days, some barrels were anchored at the breech and would bend as the cylinder pressure changed through the charge, causing zero shift. Brackets with soft o-ring supports (allowing for expansion) have become the norm, but for peace of mind, a free-floating set-up trumps all.
One point to note, and I have raised it with the factory, is that of four examples I have seen of this model two had total clearance between barrel and the nylon stud at the muzzle, and two (including this test rifle) had the barrel just sitting on the stud.

Of course it’s a minor detail, but it matters. Subsequent examples will have the stud lowered consistently at the assembly stage, and obsessive types such as myself will once again be able to sleep at night.

Take another close look at the muzzle and marvel at that, quite stunning, piece of performance art. A factory fitted air-stripper is a nice touch, and this one really looks the part. Many HFT enthusiasts swear by them, and for those unfamiliar the idea is that an internal cone strips away turbulent air, leaving the pellet to exit in the most stable state possible.

This model also gets a trigger upgrade, with a new, fully adjustable blade, and re-jigged mechanism, over the standard MPR/400 spec. The blade itself can be reversed, to be shot as a button, or flat faced; whilst the support rod can be moved forward or back.

It all felt fine for me, but I reckon, given the rake of the pistol grip, some shooters may need the blade set to the maximum rearwards setting.

Charging the action to the prescribed 190 bar is via the ‘T’ bar inlet valve design – quite the safest on the market, since the airline is locked in place for the duration. An inline micro filter should keep crud at bay, and everything is nice and user-friendly.

This quality of hardware warrants a thorough accuracy assessment over the full distance, so with that in mind I began over 35 yards – my normal zero range. At that range the HFT500 will print groups just quarter inch c-t-c. Moving back to 45 yards, the maximum target distance in HFT, I still managed groups easily covered by a five pence piece using Air Arms’ own label Diabolo Field pellets. Excellent stuff, and what we would expect from this manufacturer.

Gripping the raked pistol grip, and feeling the thumb groove at the rear, everything falls into place, yet I can’t help thinking a full drop down 90° target grip would be preferable for feel. Whilst we’re touching on ergonomics, I reckon the forend tip could be more rounded too – but, otherwise, handling is impressive, and I wouldn’t hesitate to put my faith in this gun where it matters.

Chronograph testing confirmed the shot count, with over 100 shots within a total spread of 22fps – all from what is an unregulated action.

As a footnote, I’ve been talking to the factory with regards to the final design of an add-on forend riser/Hamster, and I can confirm that they are now offering one as an aftermarket accessory.

Interest in this new model is apparently unprecedented, and with a hatful of sales to some of the HFT hardcore already in the bag, it seems only a matter of time before silverware falls to this new contender.

As previously mentioned, I’ve grown to love the FTP, but for others who want a lighter, altogether more manageable machine, still built with ultimate accuracy and tournament winning in mind, this new HFT500 could well be the perfect choice.