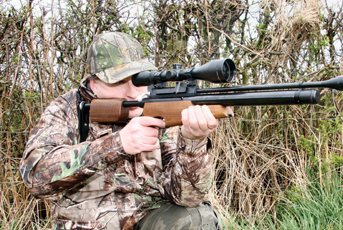 When I first heard Air Arms decided to produce a ‘take-down’ rifle based on their popular S410 it immediately stirred my interest. At the time it was only available in .22”, but I was so enamoured I got one anyway, with the intention of eventually having it modified to .177 by John Sykes at Hydrographics as he had seen the potential too!

Just as I was about to send it off, Air Arms released a .177 gun after ironing out the niggles of the rifle in the smaller calibre. The main one was that the shot count would be miniscule so the reservoir would have to be longer (as it now is) to accommodate more air and the barrel lengthened accordingly. However, most other features remain the same and as Air Arms have already improved the design on standard S400/410 series rifles, these have also been incorporated into the build of the new TDR. These include the upgraded fill point and latest 2-stage trigger with manual safety.

What’s In The Bag?

The Air Arms S410 TDR breaksdown into three separate sections - butt, action/mainframe and silencer - all of which fit into a black, carry case made by Napier and included in the package. Opening the zippered lid shows an egg shell foam lining that protects the rifle along with two Velcro straps that keep the components in their shaped compartments. It can be hand carried like a suitcase, or on the shoulder(s) with a single strap or double harness - these last two are detachable.

To assemble; the butt section pushes into the rear of the action behind the pistol grip where three steel prongs locate into mating holes in the action. It’s then secured by pushing in against spring tension and turning the large, aluminium, knurled-edge securing wheel just forward of the adjustable rubber butt pad. The oderator slides on the AA spigot on the muzzle and secures underneath with a finger screw. Fully assembled it easures 40.5” long and weighs 6.7lb un-scoped. That’s only 2” longer than the .22 calibre version and a measly 0.2lbs heavier. It’s then just a matter of fitting a scope and zeroing in, but first a closer look at the stock arrangement.

The walnut stock is in two pieces, the butt is nothing more than a vestigial wooden cheek piece/comb on the alloy tube. On the underside it carries two spare magazines, which is a practical touch. The rest consists of a short forend and pistol grip attached to the barrelled action. Though looking a little odd it doesn’t feel awkward in the slightest. The butt to all intents and purposes is ambidextrous and offers good cheek weld and head positioning. Incidentally don’t go thinking you can use this as a high power pistol as it has been designed not to function with the butt removed, so you can’t break the law accidently!

The pistol grip is near vertical and stippled for hold and the short forend is deep in profile though quickly tapers upward to run parallel with the air reservoir. Though quite sparse it still gives a well-crafted chunk of wood for the leading hand. There’s also an accessory rail in the underside for fitting bipods etc, set back from this is an air gauge.

The rifle is now filled with air like other new models in the range by a super safe, sintered bronze QD valve that ensures no dirt or grit enters the air reservoir.

It comes supplied with the brass cap adaptor that pushes over the T-bar ended inlet valve, so just twist to secure and slowly fill to a recommended 190bar. The rifle, even in the small calibre is very air efficient now having a longer air reservoir giving approximately 55 full power shots in the .177 calibre and 40 in .22. If you want an easy refill for more shots on hunting trips you can always get a highly portable BEST-FITTINGS (www.bestfittings.co.uk) mini-charging bottle as a back-up.

As the TDR uses the S410 multi-shot action, it’s well proven and reliable. The layout includes an un-sprung, 10-shot magazine that’s easy to fill, along with a railed action block for scope fitting and an ergonomic alloy bolt.

The TDR’s 2-stage trigger is the same up-graded version found on other new S400/500 series rifles. If you ever wondered what the milled slot in the underside of the guard was for, it allows access to the three grub screws that adjust the trigger. These give first and second stage pull weights and sear engagement. Safety is provided by a manual cross bolt integral to the blade. It always seems a bit of an afterthought but it works - providing you remember it’s there!

There’s the same amount of rail on the action block, as ever a bit short in front of the magazine but there’s usually no problems dropping any scope on this rifle. Mine has held many scopes and I’ve now gone back to the Hawke 3 – 9 X 50 Airmax® with Map 6 Ballistic Reticle and even with a larger optic such as this on board the TDR feels solid on aim and still light and handy. The carry case is configured to take the action with scope fitted, so no problems on losing zero when transporting and reassembling the rifle!

As for accuracy – do you really need to ask? Feed the TDR quality ammo and like other rifles in the series in the S400/410 series it gives stunning results out to 40yds with thumbnail sized groups easily achieved from a rested position. The 15.75” barrel is still a top quality, semi-free-floating Lothar Walther tube with an O-ring insert ‘strengthening band’ – while the Pro 76 silencer does a superb job of taming muzzle report to a whisper.

In my opinion, in .177 calibre the TDR is a desirable yet specialised air rifle. Although I like these trimmed, modular-type guns, there is good reason at times to have one, should your shooting dictate. Mostly when discretion is of importance, so the neat and innocuous nature of the carry case it comes in will pay dividends. Just don’t spoil the effect by being head to toe in camo! GM