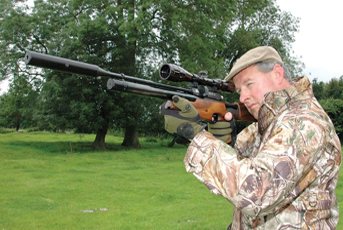 Building a range of airguns to cater for different applications makes sense, and few manufacturers can boast such a comprehensive line-up as South Coast specialists, Air Arms. Watching this highly innovative and successful British company, develop and expand over the last few decades, has been something of a lesson in marketing and market awareness combined.

Knowing your customer is always a vital part of the equation, and being able to respond to their needs and desires is surely the recipe for commercial success. It’s no coincidence then that this most respected of brands now accounts for a sizeable percentage of airgun sales in the UK, and the S410 TDR is a classic example of moving to meet demand.

TDR stands for Take Down Rifle, and is the label given to our test model which can be quickly assembled/ dismantled into its main constituent parts or assemblies.

The S410 TDR is aimed primarily at the hunter who requires an accurate, hard hitting rifle, in a format which can be broken down for easy transportation and - at times - less conspicuous use.

Pest control jobs can often arise in sensitive locations, where for example, keeping a low profile can make sense. Having a rifle which will break down into several parts, then fit into a smaller, more anonymously shaped case, can prove less alarming to the non-shooting general public. Let’s face it - not everyone shares our enthusiasm for shooting, and respecting this fact sometimes has its merits. Of course some may argue that we have a perfect legal right to pursue our sport, and should proudly go about our business. But like it or not, some situations call for diplomacy, and where parties are easily antagonized, a low profile approach can pay dividends. In this scenario, the take-down rifle comes into its own.

Over the years, several manufacturers have tried their hand at this sector of the market; with varying degrees of success I might add. What may start out as a utilitarian, highly practical design on paper, so often ends up a rather Heath Robinson affair in reality; with the demands of the Take Down blueprint dictating the highly compromised handling that results.

What sets the S410 TDR apart, is that firstly it’s based around the award winning 400 series action, and secondly, the concept’s interpretation here also includes some clever features, and ultra slick engineering. The end result is a triumph, and the fact that this model has been a part of the Air Arms product range for some while now, in a relatively unchanged format, speaks volumes for the original design brief.

As someone who consistently bangs on about the merits of the Air Arms 400/410 series, you could say I’m a fan. Building this style of rifle around the 400 action just breeds confidence, and is a great place to start.

This model comes superbly presented in its very own padded carry case. The neat little case measures 25x12x4.5inches, which is indistinct enough to create a non-gun shaped profile. With the rifle disassembled and stored away (importantly with the scope still in place on the action, meaning zero shouldn’t be affected) the case can be mounted on the shooters back using the two large straps provided. Thus a bike ride or long trek on foot is perfectly feasible; adding yet another layer of practicality. Where conventional full length air rifles can be a precarious load mounted on the back when cycling, no such drawbacks exist here.

The TDR utilizes a scaled down main air cylinder, and the S410 action comes complete with the company’s slick ten shot rotary magazine. The ‘F’ in the models name refers to the recent cosmetic upgrades and ‘fluting’ applied throughout the 400 range - such as the neat fluted ring which now sits between the barrel and breech block, and the smartly fluted filling valve dust cover, and figure-of-eight barrel clamp.

The rifle effectively breaks down to three sections - silencer, main action, and rear stock assembly. The Air Arms factory silencer is easily removed via the quick detachable knurled wheel on the underside, no allen keys or screwdrivers required. Just unscrew and slide off. Slide on and re-tighten finger tight… it really is that quick and simple.

Further pleasing design work comes with the way the rear stock section connects and disconnects from the main body of the rifle. So as not to flout pistol regulations, (where a short action could be generating way above the pistol’s legal power limit of 6ft/lbs) the action has been designed so that it will not work until the rear stock has been attached. Quite ingenious, and when you experience just how that stock connection is achieved, you have to salute those involved in project TDR. Three prongs and a central probe from the stock section, are all matched up with the corresponding holes at the rear of the action. Gentle pressure is applied to push the two sections together, and as this is done, the small knurled aluminium wheel is turned at the top of the butt pad. This tightens the internal thread, effectively pulling the two sections together. Finally, further attention to detail is to be found with the small cut-out machined into both sides, forcing a precise mating up at the point of locking together. In practise, connectivity of the stock is achieved easily, quickly and flawlessly, which all adds to the immense appeal of this model.

Where many guns of this type fall down, so the TDR excels. No ultra utilitarian hard plastic shelves for a cheek piece here. No cold buddy bottles doubling up as the fore-end either!

Instead, civilized walnut comes in two parts, and the end result feels…well just civilized. The cheek piece is formed from a separate piece of wood, which not only feels totally comfortable and functional, but also conceals a clever storage area in the underside, housing two metal sprung clips, ready to hold two extra magazines. Whether or not this option is utilized, the fact that it has been included, is to be applauded. Finally a pleasant adjustable rubber butt pad completes this section of the stock, allowing for some adjustment and stock fit as necessary.

The main stock section incorporates a full drop down pistol grip, which is a bold move to fashion in wood. Nicely stippled, this style of grip always affords good handling, and whilst the fore-end is admittedly a little on the short side, overall handling is impressive. When you consider that overall feel isn’t far off that of a conventionally configured rifle- this is an amazing achievement, given the requirements of the take-down blueprint. One point I have to raise is the sharpness of the underside of the fore-end, which is too pointed in my view, and abrasive where the edge of the recessed accessory rail can be felt on the underside.

That said, the rail’s inclusion is a great idea on a gun of this type, allowing for all manner of add-ons to be clamped into place; with lamping kit and bipods the obvious choices.

All 400 series rifles carry the same classy trigger unit, and that means a genuine 2-stage unit, capable of fairly light release pressures. The only possible down side comes with the safety catch, which I’ve never really liked as it’s actually positioned in the blade itself.

Filling the rotary ten shot mag is simplicity itself, as each pellet can simply be dropped head-first into each chamber as the drum is revolved. The drum is free to move in either direction too, unlike some designs, so it’s not over complicated.

Air Arms’ failsafe ‘T’ bar filling valve is by far the safest system, and whilst it is more fiddly than some, given the ultra high air pressures involved with modern PCP’s, I’d opt for this route everytime. A built-in micron air filter helps to keep dirt particles away from the internals too, which is reassuring.

From a 190bar charge, the TDR produces around 50 shots, and for real world hunting scenarios, this is plenty. Top-up after each session, and effort is minimal.

I’ve probably shot more versions of the s400 now than any other PCP, so I’m very aware of their capabilities; yet for the record, this .22 test rifle produced a hatful of groups sub half inch over my test 35yd range. With more time and some fine tweaking of the balance, I know I could improve on that too. An inherently accurate gun soon becomes apparent, and that’s a feature of this brand that elevates them over so many others.

To sum up, this S410 TDR is an extremely slick offering. The design is well thought out, and the execution is exquisite. Reassuringly well built, fast handling and supremely accurate. In short, if this style of rifle appeals, or has indeed become necessary, dictated by circumstances, then the TDR from Air Arms is arguably the best of its type available. GM