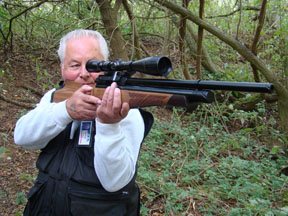 The test rifle is an example of the third incarnation of Air Arms mainstream pneumatic rifles, starting with the S300 bolt action PCP, refined with the single or multi-shot S400/S410 series and now a major design overhaul in the S500/510 series. Throughout their history these mid-priced PCPs have offered accuracy, reliability and value for money, making them favourites with the hunting community, and lately also with HFT competitors. In the past some S300 and S400 rifles have even been pressed into service for the highly specialised sport of field target shooting – and they’ve done well there too.

The S500/510 SL series show several modifications and at least one major change over the previous S400 models. The change that I refer to can be seen instantly; the replacement of the old bolt action (as in S300/400 models) with a side lever cocking system, hence the SL in the model designation.

All in the Action…

As mentioned previously, since their launch the S400 and S410 have been popular for both hunting and HFT, and rightly so, but personally I always found a little niggle with the operation of the bolt action on the multi-shot S410 version. This was simply because as you drew back the bolt, the magazine would turn one notch putting the next pellet into battery, then pushing the bolt forward would seat the pellet into the barrel’s breech. All well and good… Unfortunately, if you hadn’t pulled the bolt back enough, you would have failed to set the mechanism for the next shot. To rectify this you couldn’t just pull the bolt fully back and then forward again, as this would put a second pellet into the breech. So to overcome the problem you would have to pull back the bolt enough to allow the magazine to be removed, then with the magazine out of the gun, pull the bolt completely back until you heard the distinctive ‘click’ of the firing mechanism resetting (as the trigger blade ‘kicked’ forward). You could then turn the magazine back one notch to the empty chamber, reinsert it, then push the bolt fully home. Long winded, huh? Well actually it didn’t take as long to do as it did to describe, and in truth if you used the S410 for any length of time you soon learned to listen and feel for the extra ‘click’ at the end of the bolt withdrawal to confirm that the action was set before you pushed the bolt back to seat the pellet.

The new lever action, while not removing that extra ‘click’, nevertheless makes it much more unlikely to occur because you automatically tend to draw the lever back to it’s fullest extent with one smooth pull. This is because the lever obviously gives extra ‘leverage’… thereby making the cocking procedure a lot easier. It certainly works for me, and removes the only significant ‘gripe’ that I’ve ever had with this Air Arms rifle.

Air Arms set great store in customer feedback, and have a rolling R&D programme to keep their products at the forefront of the market. Everything they do is tried and tested before it is finalised. For this reason the lever action replaced the bolt on the FAC version of the S400/S410 well over a year ago - long before finally making the move to the new legal limit S510 model. During this R&D procedure they found that they could significantly reduce the load factor on the lever mechanism by running it on ball-races; this not only gives a smooth unstrained action but also has the advantageous side effect of reducing the ‘gap’ beneath where the lever attaches to the side of the action (this is where some other ‘lever cocking’ rifles can have their mechanism exposed to dust, dirt and moisture).

The S510 rifles retains the true two stage trigger mechanism of the previous series. This allows a very fine but positive operation. The test rifle gave a crisp and predictable let-off straight out of the box, but the unit is adjustable for both first and second stage pull weight and length of travel between these stages.

Other features include a shrouded ‘bull barrel’ with a built in primary sound moderator. In the limited time that I had to test the rifle, I found the muzzle report to be muted enough and I would leave it ‘as is’, in order to keep the length of the S510 compact. However, if you prefer an even quieter shot, the barrel is threaded to take a secondary screw-in moderator if required. On the aesthetic front, the threaded muzzle ring has unusual diagonal fluting which matches the air cylinder’s screw-on dust cap. Even this dust cover is a well engineered piece of kit, covering the neat Air Arms quick fit ‘T’ connector on the end of the air cylinder. Maximum fill pressure is 200bar but experimenting at slightly lower pressures often gives better consistency. A full charge of air will give approximately 60 shots in .177 carbine or 80 shots in a .22 model. Around 20 extra shots should be expected from rifle length versions.

The stock for this model was in walnut, although beech should be available at a reduced price. We haven’t got the prices of the various models at time of press, however, for the S400/410 series, the difference between walnut and beech models was fairly small. So if you can afford it, I’d go for the walnut sporter with its laser chequering and contrasting rosewood grip cap and forend tip.

Over the chrono, Air Arms own pellets gave some great results, with just 9fps spread over a five shot string – 773, 776, 778, 770 and 769fps - which is approximately 11.5ft/lbs of muzzle energy. Near identical Daystate pellets gave a slightly lower reading at around 11.3ft/lbs.

On the test range one hole groups (of 5 shots) were achieved right out to 40yds. An overall spread of just 20fps across a whole charge (60 shots at 185bar) were recorded with the Air Arms pellets.

The Air Arms magazine system is now a tried and tested unit and the new lever action operated smoothly and without fault throughout the tests. In my opinion this new sidelever action has absolutely transformed this rifle, so I can recommend the S510 without reservation. However, don’t worry if you prefer the bolt action of the S410, as these models will continue in full production alongside the lever action S510.