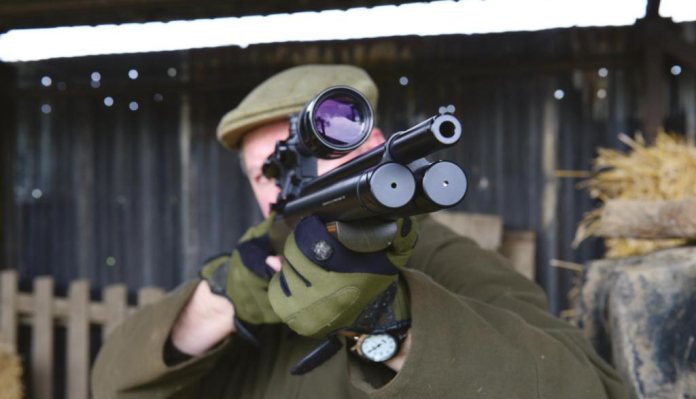 TUB! The airgun scene is undoubtedly a vibrant and highly innovative market place, and new models appear on an incredibly regular basis. Top British manufacturer, Air Arms has for some years been at the forefront of airgun development, and their product range now covers all aspects of our sport. One such model that seems as fresh and ahead of its time as the day it was launched, is the S510 TC or Twin Cylinder, as those initials denote. I was extremely impressed when I first tested one of these radically styled guns, and on test here is the latest specification, in Carbine form.

If pre-charged pneumatics (PCPs) have one failing, it’s that they are reliant upon an external power source- be that dedicated airgun pump, or diver’s air bottle. This means that total shot count needs to be born in mind, in order to keep a check on how long we have, before the gun’s residual air pressure drops to the point where it needs to be topped up again.

I’ve never been too fussed about shot count overall, but I know many shooters that are. Compare technical specifications of a variety of PCP airguns alongside each other, and it’ll be the buddy bottle style models that win, in terms of shot count; normally by some margin. Those stubby bottles sitting out front or at the back, or even in some cases, both, invariably have a large air capacity, and that means plenty of shots between fills. The down-side is that the shooter is made to grip the bottle itself (freezing on a winter’s day) as it acts as the forend. And then there are those less than streamlined visuals! Again, this aspect seems to divide opinion in my experience, yet personally, I find the looks of a ‘buddy bottle fed’ airgun a little Heath Robinson, not to mention ungainly.

Enter the S510 TC, that introduced the unusual and radical idea of joining two conventional air cylinders together, and linking and feeding them through a combined valve. The results offer a greater shot count, without any clumsy ‘bottle up front’ configuration. Clever stuff, and pretty unique too, with the looks and handling a little like a side-by-side shotgun, though a bit bulkier.

What sits at the heart of this model, is the tried and tested action of the popular S510 PCP, and that means a host of features and sophistication at your finger tips. That super slick side-lever is a good start, but add in the Air Arms 10-shot magazine system, a full-length barrel shroud, threaded muzzle, 2-stage trigger, integral manometer, and slick sporter stock, and you have a highly original sporting rifle, packed with technical ability and features.

The majority of Air Arms’ stocks are made by Minelli in Italy, and the quality is excellent. My test rifle came fitted with the sporter version, in Hunter Green, but for the more conventionally minded, it can also be specified in standard brown lacquered beech. The build features a subtle shallow forend, and the rear butt section follows that of the company’s ‘Superlite’ spec, with scalloped out channels to trim weight from under the cheek piece. Configuration is ambidextrous, yet with a wellproportioned pistol grip, rosewood cap, fairly high comb, and a significant rubber pad, handling and shootability doesn’t feel compromised!

My Twin Cylinder was specified as a Carbine, and tips the scales at 7.2lbs; opt for the Rifle length version and that rises to 7.7lbs- very manageable either way. A quick glance over the TC and Air Arms’ usual quality just stands out. Both cylinders sit alongside each other, and the fully shrouded barrel sits along the top. All three tubes are held within a soft clamp near the muzzle, and in keeping with the rest of the action, are coated in a super matt non reflective black finish; highly practical in the field. Air Arms’ renowned CNC machined components both look and feel extremely well made, and the Twin Cylinder overall, just has an air of quality.

With a scope bolted in place on the rails, my next task was getting air on-board. Highly compressed air is never something to be taken lightly, so the inclusion of a totally safe charging adaptor, supplied with each gun, is a reassuring feature, and part of Air Arms’ belt and braces approach. The brass adaptor gets threaded onto your air line - either dedicated pump or diver’s bottle, then the cup just fits over the valve’s ‘T’ bar and simply locks by twisting. Ingenious yes and pleasingly simple too! Only one cylinder valve cover actually unscrews, whilst the other is just for show, so the whole process is easy and streamlined. Charge to the prescribed fill pressure; curiously 190 bar for the Carbine in .22 calibre, yet 200 bar for all other specifications as per the AA catalogue, remove the air line, and replace the valve cap.

Next, it’s time to prime the multi-shot system. First, pull back the side-lever that cocks the hammer/trigger, and remove the magazine cassette from the left side of the action. Filling the rotary, 10-shot mag is simplicity itself, as each pellet can simply be dropped head-first into the chambers as the drum is revolved. The drum is free to move in either direction too, unlike some designs, so it’s really simple and works a treat. Once filled, push the magazine back into its slot within the action, until it snaps into place, up against the side plate, close the side-lever, and the first shot is now ready. Two 10-shot magazines are supplied with this model, and the end result is confidence in the field.

On the range, the slickness and subtlety of that ‘over centre’ side-lever just exudes class. The magazine indexed and cycled faultlessly, and the trigger, being the company’s tried and tested 2-stage sporter design, again did its job without a hitch. OK; I’ve mentioned before the rather dodgy safety catch, sitting in the trigger blade itself, this minor detail apart, there’s little to criticise. Pick up the Twin Cylinder, and for me, it just balances perfectly. Poise and refinement are two adjectives that spring to mind, and there really is a unique feel to these guns.

If total shot count keeps you awake at night, then sign up for the full-length ‘rifle’ spec version of the Twin Cylinder, and you’ll be looking at 275-shots in .22 calibre. Pretty impressive, and a rival for buddy bottle fed competitors for sure. As for my .22 calibre Carbine version, I clocked 150-shots with 30 fps total velocity spread, which is pretty impressive from a nonregulated action. Consider that the first 120 shots were within just 16 fps though (again total spread), and it’s difficult not to break out into a grin. That’s excellent consistency in anyone’s book, and far tighter than you’ll ever notice down range; where the TC managed quarter inch groups over 25yds with Air Arms Diabolo Fields incidentally. Over 35 yards, sub-1/2”, so we are talking serious accuracy here.

In daring to be different, Air Arms have arrived at an excellent alternative to the buddy bottle system. For few can match the grace and poise of this most formidable hunting machine. That choice of Carbine or Rifle spec means that individual requirements and preferences are catered for too, but whichever route you take, the TC guarantees an ultra satisfying shooting experience. In short, a unique design, perfectly executed.