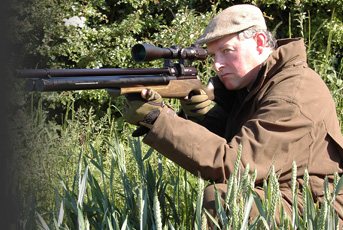 Ever since I got wind of this model in the pipeline, I was itching to get my hands on one. It’s certainly different, and guaranteed to divide opinion too; yet at its heart lies practical thinking, and a possible break through for many.

Pre-charged pneumatics (PCPs) have of course changed the shooting landscape as we know it over the last few decades; and no one can doubt the technological advantage to be gained from a recoilless action - and the relative ease of shooting that results. Yet as the concept gathers pace, many shooters get swept along on a tide of expectancy; lured by their peers to a life of compressed air bottles, divers shops, safety tests and associated paraphernalia.

It’s clearly not for everyone, and I myself use a pump in preference to air tanks, to at least minimize the hassle involved, with a level of independence.

Buddy- bottle fed rifles are an alternative approach, as many offer fairly large shot counts in between air fills. An enthusiastic following for this style of rifle has seen a plethora of manufacturers jump on the bandwagon, yet aesthetically, the buddy system often disappoints. Personal taste of course plays a part, but in most cases the lack of a fore-end means gripping a cold steel bottle in the field, which to my mind is less than satisfactory.

Dismantling the bottle for charging is a further mark down in many cases, so a flawed system in many respects. To be fair, I’m well aware that many of these rifles are held in high regard (the Theoben Rapid even has its own fan club), and no one can deny what they represent; namely fine examples of technological achievement. It’s just that they fail to appeal to everyone, even with their fairly unconventional looks alone.

Well now there’s a new cat amongst the pigeons, and I for one am watching with interest.

And Now For Something Completely Different…

Bold moves are taken by companies for a variety of reasons, and in the case of Sussex-based Air Arms, this brand new Twin Cylinder option represents a confident step into new territory.

The company seems to have a knack for perfectly timed product launches and upgrades, and whilst the majority of their new releases represent fine tweaks and subtle improvements on one highly successful theme after another, this TC option is so dramatic that it needs to be viewed as a new model, despite sharing many components from across the range. Based around the best selling S510 action, the ground-breaking specification sees two main air cylinders set alongside each other, linked at the breech end.

Having discussed the venture with Air Arms MD, Bill Sanders, it’s clear that the design brief was to build a reasonably conventional looking rifle, with a large shot count, whilst keeping weight to a manageable level. An exercise in shot capacity, which by virtue of the increased on-board air reserves, may just encourage some shooters to abandon the idea of owning a bottle or pump altogether, if Bill’s vision of the future comes to fruition. Just visiting a gunshop for the odd refill periodically, may for some be a weight off their mind, but this will of course depend on the number of shots an individual takes on a regular basis. For some however, this rifle may just hold the key. Oh, and the ‘Shotgun’ feel and look to the action, isn’t entirely accidental either apparently; maybe appealing to a new audience along the way.

With weight-saving in mind, several aspects of the rifle soon became set in stone, as the idea progressed, from drawing board to factory floor.

Producing the twin cylinders from top quality aluminium was decided upon for just this reason, and with the inevitable ‘Aircraft grade’ (everyone claims it but Air Arms do actually use it) material utilized for its high tensile strength, in the form of industry recognized 7075 specification aluminium, manufacturing integrity should be assured. The testing procedure and built in safety margins with regards to safe working pressure etc., are all equally impressive too, and with 12000 pressure filling cycles as part of this closely monitored regime, we the end user can be assured that the end product is comfortably up to spec., so to speak. Air Arms voluntarily adhere to the B.S Standard for pressure testing incidentally, which involves charging in excess of three times normal pressure. So safety isn’t an issue then!

Elsewhere, whilst focussing on weight saving, you’ll notice the distinctive scalloping and relieving of the stock around the butt area. This feature first came to life on the relatively new range of ‘SuperLite’ series of S400/S500 rifles. The stocks produced for these TC variants are supplied in the same three options as the SuperLites, namely Hunter Green (as per my test rifle here), Deluxe High Gloss, and Traditional finish. By paring away any excess wood, the final weight compares favourably with many competitors, despite having those sizeable twin cylinders in place. Quite an achievement, and with my full length rifle tipping the scales at a mere 7.6lbs (unscoped), many rivals will be rightfully worried at the arrival of this new kid on the block.

As stated previously, this was the rifle version that I was testing, but for those that prefer something more compact, a carbine model is available. The TC carbine is 37.5” in length and weighs just 7lbs 1oz, but obviously gives a slightly fewer yet still impressive shot count; expect over 110 shots in .177 calibre or 160 in .22 calibre.

As for the S510 action, on which, as previously mentioned, this model is based, multi-shot performance comes with the inclusion of the Air Arms 10-shot rotary magazine. A neat side cocking lever, and a proper two-stage trigger are also part of the specification, coupled with a full length, ported shrouded barrel. In short, this TC Rifle is one hell of a package, and with those bulging twin cylinders on board, it cuts a distinctive profile.

Before heading to the range, those twin cylinders needed air, and here, the now standard Air Arms ‘T’ bar filler valve comes into its own. Yes it’s slightly fiddly compared to some, but there’s no safer option on the market for sure, since the air line simply can’t move once locked into place.

With 200bar safely on board, I first set about the arduous task of testing for total shot count; which with this rifle’s capacity, was always going to be a long drawn out affair. Some 285 shots later (Air Arms only claim 275) I was suitably impressed. Total variation over the chrono was 36fps right across the charge, which for most uses would be fine. To close this consistency gap, and in keeping with any unregulated rifle, filling to a slightly lower pressure would tighten the power curve, although a few shots would be sacrificed from the total count.

It’s no secret that I’m a huge fan of Air Arms, and have come to appreciate the finely engineered, clean cut rifles, that offer primarily, no-nonsense, uncomplicated, classy performance. With two S400 rifles in regular use, to say I’m familiar with the brand is an understatement, but what surprised me is that I had hardly handled their side lever models - until now.

Simply put, the S510 side lever is an exquisitely refined piece of design, with quite the sweetest and slickest cocking cycle available. Couple this with Air Arms’ well established 10-shot magazine system, and the fact that I didn’t experience a single hitch or blockage throughout my test, should come as no surprise.

Loading the mag is a simple affair too, since the internal drum is free to rotate in either direction. The downside is that no warning or stop comes to indicate that all pellets are used up, and the fact that it is possible to inadvertently double cock, cycling two pellets into the barrel, (a widespread problem in this type of multi-shot PCP) is as usual, slightly frustrating. As for the sheer robustness of the magazine area though, I can only say it’s faultless.

And so on to the inevitable target cards. The 35yd groups were very encouraging, helped in no small part by the competent 2-stage trigger unit, printing tight clusters measuring a hairs width over ¼” c-t-c. Moving back to 45yds, and in an unrelenting side breeze I might add, groups were barely much larger, spreading to 3/8” ctc. In absolute still air (a luxury I simply wasn’t afforded for the duration of my test period), I have every confidence that this rifle could improve upon even these excellent results. What amazes though, is the effortless nature of the firing cycle. Some rifles need to be really worked to extract every scrap of performance. Not so these masterpieces, and in keeping with my s400’s, the ‘pointability’ and blisteringly accurate barrels, tend to flatter the user somewhat.

Perfect balance plays a part in that, and on that score, this Twin Cylinder S510 is a triumph; although as a minor criticism, I would favour a slightly deeper fore-end.

In terms of marketing strategy for Air Arms, this new TC model sends an unequivocal broadside to many of their rivals, who must surely tire of trying to close the gap on this most go-ahead of British companies. OK; this model doesn’t sound the death knell of the air bottle anytime soon; yet with the introduction of this new Twin Cylinder S510, Air Arms can be rightfully proud.

For what it does do, is give the discerning PCP enthusiast an exciting option and a serious alternative to the buddy bottle systems, by significantly extending shooting time in between pressure fills. It also opens the way to higher power FAC rated models with reasonable shot capacities.

So with gloriously distinctive looks, is this another hit from this classy stable? I for one wouldn’t bet against it.