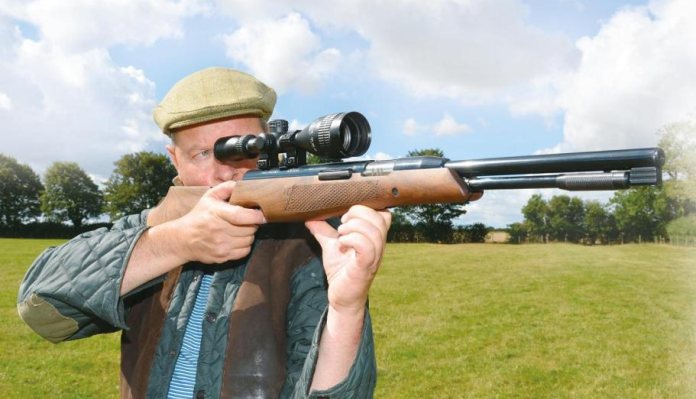 It’s been a few years since I last handled one of these rifles and this is the first time I’ve handled an Air Arms TX200 HC in walnut. I know I bang on a bit (too much maybe) about quality timber, but what a beauty! What really stands out is the ultra matt oil finish of the stock, and it really looks the part. Sussex-based, the company have come a long way with this model, and it’s interesting to quickly remind ourselves just how it all came about. In a word; competition! There’s nothing quite like it for keeping everyone on their toes. It’s what underpins our vibrant economy, and it stops businesses from resting on their laurels.
Fast rewind to around 1985, and Weihrauch’s HW77 was causing a major stir on the Field Target (FT) scene. NSP Engineering, the group behind Air Arms, just couldn’t sit back and do nothing, since, tooling at the ready, they were so well positioned to hit back. As a company, they have always had a reputation for listening to customer feedback, and also not being afraid to employ the knowledge and skills of outside influences. Top designer Ken Turner was promptly signed up, along with Nick Jenkinson (now three times World FT Champion), and project TX200 was born.

Of course, what lay at the heart of the ‘77’s success, was its fixed barrel format, and the TX200 replicated this, but then went further.

Nick fashioned the original stock configuration (now evolved with revisions along the way), whilst Ken Turner’s blueprint saw a truly centralised bore, along with the piston running on synthetic bearings. This means that friction is minimised and a smoother, more efficient action is the result.

The standard TX200, now in its MKIII guise, is a full-length model, which means that it can seem rather front heavy for some. The Hunter Carbine version, on test here, trims the original barrel spec down by some three inches, which makes all the difference in terms of balance. Weight wise, if you bear in mind the original TX200 in beech tips the scales at a full 9lbs, this HC model in the lighter walnut, at 8.4lbs, is that bit more manageable.

So, just what is on offer, with this latest TX derivative? A single shot, under-lever action, integral moderator, internal safety mechanism, 2-stage trigger, and a walnut (in this case right hand dedicated) sporter stock. The spec looks good on paper, so let’s remind ourselves just why this model ‘s reputation precedes it?

Cast an eye over the HC, and the quality just screams out. The rich, deep chemical bluing just seems to get better on Air Arms’ products these days, and this gun is no exception. Highly polished and perfectly finished metalwork always puts a smile on the face, but coupled with the highly detailed stock, the overall impression is of a serious piece of machinery.

Dedication to the cause

Like many in the trade, Air Arms source the vast majority of their woodwork from Italian stock maker, Minelli, and they certainly produce fine work. A unique feature of the TX range is what’s termed ‘fish scale chequering’, and it not only looks the part (a matter of opinion I suppose), but the raised elements are highly practical in terms of grip. Detail around the pistol grip is particularly swish, with that rosewood cap and the AA logo neatly cut out underneath.

At this juncture, there’s a point worth mentioning. Whilst a large number of airgun manufacturers currently opt for ambidextrous stock configuration, in a bid to keep production simpler and inevitably cheaper, Air Arms deliberately adopt a policy of offering right-hand dedicated timber. They occasionally come in for some flak, for offering the option of a left-handed version at a premium, yet, handle this TX200 HC, and you’ll soon remember why a dedicated hand configuration is better. Fold your palm around the grip, and the pronounced swell just feels spot on and reassuring. No compromised hand position with this model, and surely that’s worth the extra £17 odd on the list price for left hookers?

Cocking the HC is a fairly simple affair. With the butt placed securely in the groin, pull down and release the under-lever from its spring-loaded detent, and pull all the way down until the trigger and safety catch are heard to set. With the lever held firmly throughout (best practise with any under-lever airgun, irrespective of safety features!) push a pellet home into the lip of the barrel. Then push the Safelok bar, to allow the under-lever to be returned to its closed position.

Air Arms upgraded the TX200 mechanism a while back, and this included lengthening the cocking stroke. Springpowered airguns are all about fine tuning and a compromise between transfer port size, spring length, piston seal tolerance and many more factors besides. Cock this HC however, and the sheer ease of the stroke is what really stands out. The ratchet system of the Safelok, anti-bear trap mechanism does make quite a racket, but depress the Safelok bar whilst cocking, and the operation is all but silenced.

Internally, as previously mentioned, there’s some added refinement that comes to bear on the overall firing cycle. An internal spring guide, synthetic bearings on the piston, and the integral moderator, all come together nicely, and my test model soon revealed a super slick action, with no spring resonance whatsoever, just a quick snap, more synonymous with a fully tuned rifle. The unusually soft rubber butt pad is immediately noticeable, as is the quality fully adjustable ‘CD’ 2-stage trigger unit, which actually came perfectly set, with an ultra-light first stage, and a totally predictable, clean second.

With all this refinement on offer, I would have been highly disappointed with anything other than top class accuracy, but average groups of a little over ¼” over 30 yards, shot from the over arm FT sitting position, was welcome relief. OK; these are meaty rifles, that can be a handful over a prolonged shooting session. Yet in this sector of the market, certain weight levels are par for the course, given all the mechanics that need to be crammed in.

Consistency over the chrono, was, for the record, nothing short of phenomenal, with 4 to 6 fps respective total spreads over a ten shot string, recorded with two leading pellet brands (see below). In short, the TX200 range of rifles are no stranger to success, with a history of taking silverware in FT and latterly HFT springer classes, as well as the World Spring Gun Championships along the way. In fact, draw up any short-list of serious, adult, spring-powered airguns, and the TX200 HC just has to be there. A class act awaits!