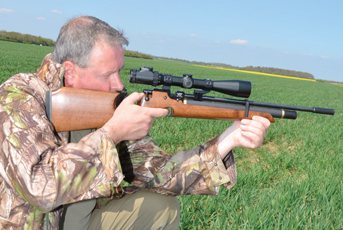 While cumbersome spring powered airguns can often impede the novice shooter, due to their need for heavy mainsprings and pistons (inherent in the design), no such drawback exists for pre-charged pneumatics.

In its simplest form, a very basic PCP layout sees a main air cylinder and knock-open valve, almost hollow by comparison. Designers are largely free to exploit the system, with the main limitation being shot count. Trim the length of an air cylinder, and the lost volume means less shots overall; so a compromize is often arrived at.

The S200 is based on a starter match rifle and was introduced by Air Arms as a scaled down, ultra slim-line model; easier to handle for ladies, juniors, and shooters of smaller stature all round. It’s also one of the few guns in the line-up of this British brand, that isn’t made in good old Blighty - since it’s manufactured as a joint venture by CZ in the Czech Republic. CZ of course need little introduction, with their worldwide reputation in the firearms market, not to mention their renown for fine barrels among other things. So ‘project S200’ was always in good hands.

The latest version of the S200 on test here, sports the single piece stock, which is a big improvement on the early two-part designs. The low, tapered fore-end, combined with a semi-target configuration, creates a distinctive profile too, and there’s no doubting these guns have their own identity.

Whilst on the subject of the stock, it’s clearly a Minelli offering (the Italian based stock maker, that supplies the bulk of Air Arms’ furniture these days), and for that, read precisely machined and finished, since their work is fast becoming the industry standard. This S200 stock is fashioned from beech, and whilst it is treated to a thick lacquer finish, the attractive grain pattern is still clearly visible. Panels of stippling are a further nice touch too, and that sweeping cheek-piece/ drop down pistol grip is classic Air Arms design.

Whilst the S200 is a proven performer, some cost cutting is undeniably evident. Features such as the plastic loading tray, and the plastic trigger blade itself, do feel a little cheap. The loading tray is also worth pointing out, since it requires the pellet to be rolled across into the central channel; to be picked up by the bolt. Given the narrowness of the breech area, this operation is not for sausage fingers, so handling and testing in this regard, must make sense before investing your hard-earned cash. With this rifle’s remit as a model for juniors and lady shooters, as already specified, the breech design shouldn’t pose too much of an issue for its intended market to be fair.

Unlike most models from Air Arms, the S200 features a removable air cylinder, meaning that, further down the line, the main cylinder can be simply unscrewed and sent for safety testing, without the need to take the whole rifle to the test centre. Normal charging of the system is thankfully undertaken with the cylinder in situ, although my test rifle proved slightly irritating, in that the main cylinder would try to unscrew when I was simply trying to remove the screw-fit valve cover at the front. Simply holding the cylinder whilst twisting the cover proved the solution, yet the cylinder’s movement was disconcerting nonetheless.

Charging the S200 is simple and ultra safe, courtesy of the ‘T’ bar valve that totally locks the air line in place for the duration of the charging procedure. Air Arms recommend a fill pressure for these rifles of 190bar, and from that prescribed dose, I was surprised to record around 85 shots with my .22 model. Admittedly .22 as a calibre, is far more air efficient than the smaller .177, yet that diminutive on-board air cylinder still belies such a shot count. Experimentation with charge pressures will undoubtedly tighten up consistency, although the band of usable, super consistent shots, will drop accordingly. Bear in mind that Air Arms only claim 55 shots with this model though, and my findings were way better than that.

Fitting a scope needs some thought, as the dovetail rails are fairly short. Unusually, an extra mounting block is supplied, which is actually fixed to the barrel. No cause for alarm though, as close inspection reveals that there is clearance between the block and the cylinder, avoiding any expansion/ zero shift worries. In these days of ‘reach forward/back’ specialized mounts, there’s little that can’t be easily overcome in any case, so final positioning of most glassware should be acceptable. I can understand slightly bland ambidextrous stock designs can be a way of keeping costs down, as dedicated left hand models become unnecessary. Yet, if there’s going to be a slight cut-out for the right hand slung bolt handle, then there might just as well be a defined right biased cheek piece. Nevertheless, handling is very civilized.

One area of annoyance which really warrants highlighting, is the trigger. The blade is plastic as already mentioned, which isn’t in itself a problem. However, that curious shape, being wide at the top of the blade and fairly short and stubby lower down, results in a less than precise trigger pull. The fact that the blade can be adjusted for position along its support shoe, is an excellent feature, but a simplified thinner flat match blade, would be preferable.

On test, this S200 proved an accurate performer, much as expected, with half inch groups at 35yds fairly easily achieved, using Air Arms’ own Diabolo Field pellets.

In the interests of pushing for a super light model, to appeal to ladies, juniors and shooters of smaller build, I’m surprised that Air Arms don’t offer a scaled down carbine version, to push the concept still further. As it stands of course, the S200 is still a popular model for this highly successful company, being aimed at shooters who fancy investing in the pre-charged format, yet wish to keep weight down to manageable levels.

As such, the 200 is a fine rifle, but any fair assessment surely has to take into account the fact that the price differential between the S200 and Air Arms’ own S400 model has now closed significantly. Handle the S200, and if that stock configuration and feel overall, appeals, then a satisfying performer awaits.

For me though, the fact that the award winning S400 in its basic beech guise, can be had for just £40 more - is serious food for thought. GM