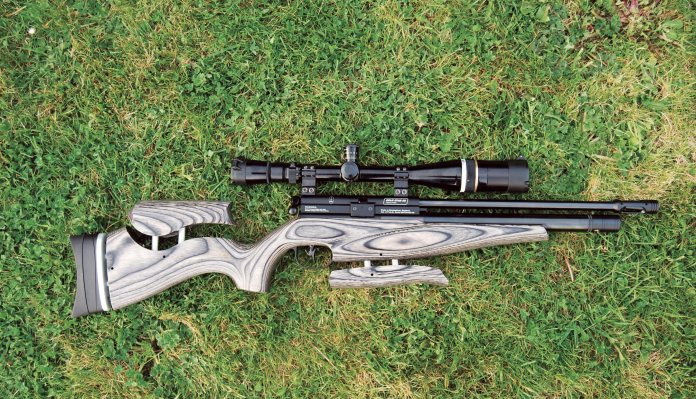 Those of you of a certain age will remember the names BSA and Gold Star associated with one of the last legends of the old British motorcycle industry. The Goldie was successful in almost every sphere of motorcycle sport, from the Isle of Man TT to International motocross and desert racing. It was also the name of BSA’s first successful multi-shot rifle (a springer, long since discontinued), so for BSA to reuse the name on the first target based pre-charged air rifle they have ever produced is a sign of their confidence in the product and the heritage it represents.

Launched at the 2014 Midland Game Fair, the Gold Star SE is a rifle which from the outset has been designed to be used for outdoor target shooting. It leans more towards the HFT side of the sport, but my feeling is that with its brand new regulator and 15 inch hammer forged barrel, it has a good chance of making its mark in FT too, maybe not on the GP circuit, but certainly with regular regional and club shooters.

The Gold Star is available either as a single shot model or, as in this case, with a standard BSA 10 shot magazine. You get one mag with the rifle and as my intended use is FT/HFT I also added a single shot adaptor to the kit.

The first thing that stuck me looking at the GS is, of course, that stock, and all the adjustable bits. There are two colour schemes of laminate offered, a very patriotic red, white and blue, or the one in this review, black pepper. They both have a lacquered finish with a nice glossy sheen. There is also a walnut stock option, and all are ambidextrous.

The butt pad is more than just a rubber pad, it is actually three way adjustable, as the pad itself slides up and down, the slide the pad runs on rotates left and right and with the mount sitting on an FT style adjuster, length of pull can also be adjusted. The cheekpiece also has an adjuster that allows it to be raised quite a long way, in fact further than my medium scope mounts required. Forward and on the underside we have the palm shelf. This can be move in, towards the forend, or out, it can also be moved forwards or back, both of these achieved via an Allen-headed screw, finally with the palm shelf taken off the rifle, two wood screws can be loosened and the shelf can be moved left or right of centre. If required, the whole shelf can be removed.

All of this adjustment is clearly there for target shooters, but is equally useful for the hunter, however at this point I have to register a concern. The screws used on all these adjusters are quite small, as is the supplied Allen key, and I found it extremely difficult to get everything done up tight enough, as when using the short end of the key in the screw there was a danger of contact with and damage to the stock. My solution was to use the long end in the screw and use a pair of pliers to apply enough torque to keep everything tight – not really ideal. My solution would be to use slightly bigger screws and hence a slightly bigger Allen key. Gripe over, let’s move on.

The action is all black, a combination of anodising on the alloy breech assembly and blueing (or should that be blacking?) on the air tube, barrel and air stripper. The bolt is also black, as are the safety catch, trigger guard and trigger blade. The name of the rifle, serial number etc. are etched on the action in silver and the whole package looks very neat and purposeful.

A few words on the air stripper: first, the cone is factory preset, but is adjustable, so it can be fine-tuned to suit your pellets. Second, it is mounted using a ½ inch UNF thread, so if you want to, you can put a moderator in its place.

The first thing you notice on picking up the Gold Star is the weight. It is not up there with the 10lbs plus of the average FT rifle, but at 7lbs it has a definite heft. First job is to put some air in, this is done by rotating the cover at the front of the air tube to expose the filler port which takes a probe-type filler. Very usefully, there is a pressure gauge on the end of the air tube, to allow you to keep an eye on how much air you have at any time. Filled to 232bar the probe is removed and the cover rotated again and we are now ready to get down to business.

As I intend to see how the Gold Star shapes up on the FT course, I fitted my trusty Leupold EFR. I adjusted the pull and the cheekpiece height and also turned the palm shelf around 180 degrees, as I felt it would be more comfortable that way.

Before firing a shot I prefer to give the barrel an initial clean, I then took a few shots to settle everything in and paid my first visit to the chrono. A string of 20 shots showed a steady 793 fps, with the occasional 795 and one 800. Later on, after a goodly number of pellets had passed down the barrel, a retest showed that things had settled to a consistent 785 to 788fps; fast enough and nice’n’legal.

It’s a while since I have had to zero a rifle, but that job done and in a brisk wind I put some groups together. The cocking action requires a relatively short pull, the bolt handle is wellpositioned and shaped making cocking a nicely instinctive movement. The action has to be cocked in order to put in the magazine, this is where the safety catch comes in useful, either initially, or when topping the mag back up again. Once the mag is within the breech, a small locking mechanism is engaged by sliding a catch at the breech end of the barrel towards the breech. This locates a small pin into the mag itself, locking it in place. As I’m using the single shot converter, the next move is to flick the pellet tray out and this is a really easy and quite natural action. Be aware that, unless the rifle is held horizontal or slightly barrel down, the pellet can quite easily fall back out, but it is a very minor point and the technique is soon acquired.

The factory setting of the two stage trigger is excellent and I felt very happy with the light but noticeable first stage and the short sharp second stage. Squeeze on the second stage and a reasonable report tells you the shot has gone, there is no other sign than that, no push, kick, jump, nothing. Like it! While talking triggers, the blade can be rotated left and right and even backwards and forwards, so all hand sizes can be accommodated.

Time To Get Busy

I am fortunate, as I have access to several acres of grassed paddock, so off the Beeza and I went for a target session. Given that all I had heard about the Gold Star was that it had a fine ability to buck the wind, I was doubly fortunate to be able to shoot in sunny condition with a 10mph average wind gusting up to near 20mph.

First the 25 yard zero checking session. That produced repeated 10 shot pellet on pellet strings, at 35 yards things opened up a bit (remember that wind) but groups were still inside a 5p piece and when shooting at a 40mm kill-zone, prone, sitting or kneeling I had 100% success and it really was very easy. At 45 and 55 yards I just concentrated on hitting the kill. Prone and sitting at 45 yards I was finally starting to see the effects of wind, but that was only in carrying the pellet from one side of the kill to the other, a smaller kill would have certainly raised the stakes, but not by much. Only when I got to 55 yards did I really see a measurable effect. At the height of gusts or in a steady blow the pellets were being carried around 45mm total, so 5 to 10mm outside the edge would see a safe kill, only we all know it’s not that simple and I had a number of tricky shots that went dead straight as the wind dropped.

This is a really well balanced rifle, so positional shots are a lot about your technique. Prone, sitting, or kneeling, the weight and balance of the BSA is excellent, although I would not want heavy scope up top, as this could introduce some tendencies to rotate. When standing, you do become aware that you have a shorter, lighter rifle in your hands (remember that wind), never the less the fast trigger and short barrel mean that if you squeeze off the shot when over the kill, you should be on safe ground.

The Gold Star SE is a cracking good rifle, every time I shot it I finished up with a smile on my face. BSA have put a lot of thought and work into the whole package and I think it shows. A neat touch is that a complete set of Allen keys is included, along with some seal lube and a set of three ‘o’ rings for the filler and pellet probe.

The weight and balance of the Goldie is just what you want in a target rifle, it is smaller and lighter than most of its competitors, with the exception of the Steyr LG110 range, but that does not detract in any way, and the accuracy of the new barrel is excellent and as good as anything I have shot. In fact, I like it enough to have spent my own money on the rifle you see here and will be using it all season to see how it (and I) shape up.

Thanks to Kevin Jackman at Ronnie Sunshines in Newton Abbot for getting the rifle in for me, sorry Kev, you’ll have to order another for stock now.