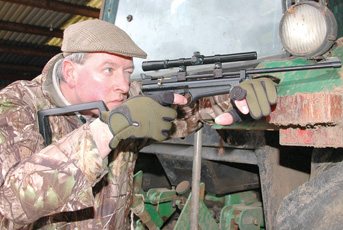 As a lifelong fan of the Crosman American Classic Medallist ‘pump-up’ pneumatic pistol (now called the 1377C in the UK), I’m more than familiar with this famous name in airguns, and its contribution to good old fashioned fun shooting. This unique American brand may often seem a little basic when compared to more sophisticated European fare, yet to dismiss them as mere plinking tools is to seriously miss the point.

A Feel Of It’s Own

The Crosman 2250B is my test model here, and whilst it looks familiar, to the Medallist it’s actually a totally different animal. A CO2 gas system lies at its heart, so it’s effectively a Carbon Dioxide powered version of that very same Medallist pistol; save for a few significant add-ons. The main chassis on which it is built, owes much to that classic favourite of mine, and the distinctive profile should come as no surprise, since an identical rear sight, and bolt housing assembly (to name but two areas) hail from the same parts bin; helping keep production costs low.

Add in of that rugged shoulder stock, and a highly individual and appealing ‘carbine-sized’ airgun is the result, with a feel and character all of its own. Whilst the effective range of this Crosman may not be in quite the same as a rifle, the performance is nonetheless impressive, and I’ll come to that in a moment.

CO2 is a completely different ball game to conventional air power, and for those unfamiliar with this branch of the sport, let’s run through the preliminaries.

Power is derived from a sealed capsule of CO2 gas, which in the case of this gun is the 12gram size - similar in appearance to the old soda stream capsules. With capsules costing around 80p a go, and good for around 50 shots when used in this model, the cost of shooting C02 is obviously greater than conventional air. Whilst discussing the downsides, one of the characteristics of C02 is that power output can vary depending upon the ambient temperature on the day. Ultra cold conditions for example, will lower the pressure and thus the number of available shots. Conversely, very warm conditions will increase the number of shots per capsule.

The build quality of the 2250B really defines the term ‘no-nonsense’, with synthetic grips and that ultra utilitarian shoulder stock. That same down to earth approach is also refreshingly practical, as function distinctly overshadows style. Nevertheless, on the face of it, this gun still seems astonishing value for money, since it comes as a package, complete with a 4x15 scope and mounts. It’s also fitted with open sights as standard, and I would advise on giving these an outing first, since they offer an interesting combination. The fore-sight incorporates a green fibre optic element, which means it stands out in poor light fairly well. The rear sight takes the form of Crosman’s tried and tested design, with a reversible leaf offering either a large square notch, or peep sight. Given the potential of these guns though, the scope route must make sense.

With this in mind, my first task was to piece the combo together - an eye opener in itself. Crosman don’t include scope rails in the design, so fitting the scope sees an unusual method employed.

Termed as an ‘Intermount’ two sighting blocks are utilized, which are first unscrewed so that the two halves can clamp around the barrel, with their squared off bottom allowed to sit on the cylinder. Whilst this method is unorthodox, in practise, and in the case of the 2250B, it works a treat.

With the glassware now neatly locked into place, the next task was to fit the CO2 capsule. A knurled, threaded cap just forward of the action needs to be unscrewed, and a CO2 capsule dropped into the chamber. The cap is then replaced and carefully screwed in, until a gentle ‘hiss’ is heard, signifying that the end piece ‘seal’ of the capsule has been pierced to release the CO2 gas. In the event that this doesn’t happen, then a coin or similar object can be inserted into the slot on the front of the cap, to exert greater pressure, to eventually break the seal.

With the system powered up, subsequent procedure then requires the small brass bolt to be drawn back and cocked, a pellet rolled into the breech, and the bolt returned. I find loading these Crosmans is best achieved by nudging the pellet into the lip of the transfer port, before returning the bolt, which stops the pellet from getting caught up in its channel.

Zeroing the scope was simplicity itself, and whilst I’m no great fan of the 4x15 spec. on test, I had no complaints.

This Model 2250B has proved extremely popular since its inception, and having now put it through its paces, I can see why. If I’m honest, my expectations were low regarding performance, due as mentioned, to the fairly basic scope on offer. Yet gradually, as the shots continued to tear tight clusters down range, I was forced to concede, and with my preconceptions kicked into touch, I was left in no doubt as to just why this model has sold in such large numbers.

Trigger wise, the design is undeniably basic, yet that said, it still trips after a reasonable pressure is applied. A wider blade would help to spread the load over the pad of the finger, yet in practise, performance is wholly acceptable.

Groups of a little over half inch at 25 yards, using the Crosman Pointed pellets supplied for the test, were, in my opinion, quite excellent for this type of gun, and better than many rifles costing far more.

Handling is refreshing due to the incredible lightness overall, and at 3lbs in weight, just about anyone should be able to enjoy the experience, making this an ideal gun for beginners, juniors and lady shots across the board. On that note, the inclusion (as with all guns from this stable) of the Crosblock safety device, which effectively locks the trigger from unwanted attention, is a great touch, and Crosman deserve praise for leading the way in matters of safety.

Relatively low power output will of course restrict the use of this model 2250B, yet the manufacturers only ever intended it for general purpose use, and informal target shooting, and in that regard, to say I was mightily impressed is an understatement. With serious accuracy on tap, any shooter can be rightfully rewarded once their technique improves, allowing this model to leapfrog many supposedly better equipped rivals out there.

Quite the most enjoyable airgun I’ve shot in some while - and something of a bargain too! Nice one Crosman.