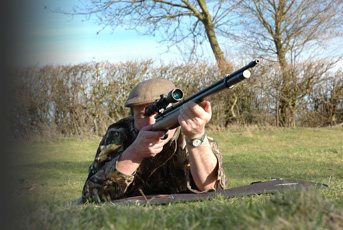 Having started my own airgun club a few years back, it’s been interesting to observe newcomers to the sport, and how they go about rifle selection. Of course I advise where possible, but the final choice has to be down to the individual; their personal taste, and requirements.

There’s a lot to be said for sticking with the basics too, whilst learning the ropes, and mastering spring-powered rifles can set ‘good practise’ in motion from the outset. With less forgiving ‘springers’ requiring far more technique to achieve decent results, they’re a great asset to teaching the art of airgun shooting.

However, peer group pressure and the perceived advantage of going ‘pre-charged’, means that the vast majority of our new club members have now made the change to PCP rifles.

There’s no doubt that shooting a near recoilless gun is easier, and if pre-charged pneumatics (PCP’s) are the chosen route, then my test rifle here must represent one of the cheapest entry level options currently available, at a highly competitive £250.

The Benjamin Discovery, from the Crosman Corporation in the USA, is an unashamed no-frills bolt-action PCP, which should help to bring the pleasures of recoil-free shooting to a wider audience.

One rather intriguing feature of the sales blurb, is that Crosman offer this model with a ‘duel fuel’option. That is to say, it can be filled in the conventional way (via hand pump or air bottle) with compressed air, OR filled with Co2! Since the Co2 option doesn’t utilize the more convenient and familiar capsules, and would instead, require the rifles main cylinder to be filled from a main Co2 supply (possibly from a pub, as it was explained to me!) this wholly unorthodox route is best ignored! In fact thousands are unsurprisingly not taking up this bizarre option as we speak, so I promise not to mention it again…

The Discovery (viewed as a conventional PCP) carries all those Benjamin/Crosman hallmarks that we know and love; with a prime example being the rather frugal varnished American hardwood stock. Savings are clearly made here, with a rock solid plastic butt ‘plate’ offering little in the way of grip or comfort, yet to expect too much with this rifle is to miss the point. The woodwork may be plain, with no defined cheek-piece on offer, yet it handles well enough. Indeed the curvaceous fore-end is particularly comfortable in the aim.

This sort of woodwork cries out for customization, and the simple and cheap addition of a rubber shoulder pad is a good place to start.

A cut-out on the underside of the stock reveals the obligatory on-board pressure gauge - almost ‘de rigueur’ these days! As always, use this feature as a handy rough guide only, and charge the rifle according to the gauge fitted on your bottle or pump apparatus.

Action wise, this Benjamin model largely follows accepted PCP wisdom, with the barrel sitting above the main air cylinder; held inside a clamp/support towards the muzzle end. One detail which raises an eyebrow though, has to be the way the barrel is held within that clamp, with a small socket screw, gripping the barrel, rather than the usual ‘o’ ring.

Play and flexibility in this area makes sense, allowing for any microscopic distortions as the air cylinder contracts and expands (quite normally) under pressure change. But whilst I would prefer to see a soft ‘o’ ring, I can appreciate that the Discovery (as it’s name suggests quite aptly) is primarily aimed at the newcomer to the world of pre-charged pneumatics, rather than a competitor in the FT World Championship.

As such, it’s is an attractive well balanced rifle, which feels right from the word go. OK, the finish to the metalwork is fairly average, yet the semi matt chemical blacking does the job.

That balance is due in no small part to the unusually long barrel, which at 26inches, is one of the longest out there! Despite the length, a fair muzzle crack still exists with this rifle, but with a threaded adaptor at the muzzle, ready to receive a standard 1/2inch UNF compatible silencer, muzzle blast can be tamed to suit. Undeniably, the muzzle adaptor thread left on show, leaves a rather ‘unfinished’ look to the muzzle, but again, it’s a safe area for any manufacturer to make savings. Interestingly, the Owner’s Manual, supplied, shows illustrations of a version of the Discovery complete with fibre optic sights, so the manufacturers have obviously toyed with different specs along the way.

The bolt on this Benjamin has been machined with squared-off sides, aiding grip, but the bolt operation was a little sticky occasionally, and a little slack within its housing. One slightly irritating feature is the very short loading channel, and I found the best technique for smooth operation was to gently seat the pellets into the breech with the finger nail. This allowed the pellet to enter the barrel straight, before the bolt prod completed the procedure; sounds fiddly – but is easy in practise.

Given this rifle’s remit, I wouldn’t have expected wonders in the trigger department, yet I was pleasantly surprised. It has a plastic blade of course, yet the broad spade and reasonable pull weight makes for a wholly acceptable experience.

There was one unexplained feature - the safety catch… or lack of it. The moulding clearly states ‘push safe’, yet I can only think a small component had been missed off, since the button was inoperable, and seemingly incomplete. One glance at the ‘Owner’s Manual’ showed the small black button that was clearly missing! A minor detail, however, since I consider a proper safety regime on the part of the shooter outweighs a mechanical device every time.

This is probably the time to congratulate Crosman for the inclusion of the ‘Crosblock’ trigger lock - supplied free with all their rifles. This cleverly locks around the trigger, until the plastic key/tool is used for release. I’ve said it before, but such a small, plastic, cheaply produced item is worth its weight in gold, and Crosman deserve credit for effectively setting an industry standard in this respect.

Fitting a scope to the Discovery is easy, given the well cut 2-part dovetail rails above the breech block. So with glassware firmly in place, I was keen to see just how this new rifle would shape up – which is even more important than normal because the Discovery will be many a new enthusiasts first taste of recoilless PCP’s.

Charging is carried out in the conventional way, by removing the plastic push-fit valve cover to the front of the cylinder. A bayonet adaptor is supplied with each rifle, and once fitted to the air supply outlet, it can be quickly connected and removed from the rifles filler valve. The Discovery, incidentally, requires an unusually low pressure of just 2000psi, which equates to around 135bar.

I clocked 40 shots within a highly acceptable 25fps, before the velocity began to drop off significantly, although at least another 20 shots were available for informal sessions. Power wise, the Disco comes in around the 10ft/lbs mark, despite some rather enthusiastic advertising; but this energy output is ample for medium range hunting and most outdoor applications. With the industry now supposedly self-regulating, and setting full-power rifles to around 11ft/lbs, the Discovery isn’t far behind in any case. Whilst PCP’s capable of huge shot counts are becoming a near obsession these days, 40 odd shots is plenty for this type of entry-level model. Indeed,  keeping an all-important tab on the number of shots taken, is good practise with any PCP, and when I first used a PCP, I would count out 40 or so pellets into a pouch, and thereby know my limitation.

Once the appropriate number of shots have been taken, and the cylinder drops to the minimum residual pressure, the rifle can be recharged as required.

So just how did this Discovery perform? Well with Crosman Premiers (unusually dirty to the touch), supplied with the rifle in .22 calibre, the Discovery didn’t seem too keen; so I switched to RWS Superdome and the ubiquitous JSB’s - this time made for FX. At 25yds, the Superdomes printed 5/8inch groups, but the FX pellets, proved even more compatible, with groups just shy of half inch. Fairly impressive I’d say!

One point to consider concerns the obvious additional cost of charging gear. An allowance of around £100-150 for either a dedicated pump or air bottle and gauge, maybe a significant sum, yet can be viewed as a long-term investment in the system. Once the charging gear has been purchased, bear in mind that it can be used for charging different guns further down the line, by simply swapping over the filling adaptor with the new one supplied with any subsequent PCP.

In the Benjamin Discovery, Crosman have a well balanced and sturdy little performer. Of course it’s made down to a price, but it’s a rifle that ‘does what it says on the tin’, and given the asking price it has few rivals in its class.

VELOCITY:
Crosman Premiers gave 40 shots within 25fps (the first 30 of which were within 16fps) at an average of 550fps overall