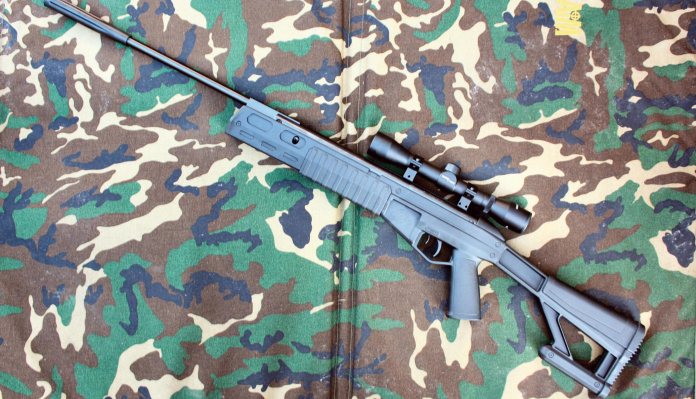 When the tactical denotation first began to be used in relation to air rifles it was often because the rifle was dressed in an ABS stock.

However, certain gun manufacturers are now increasingly launching air rifles that embrace the true meaning of the word because the rifle has the cosmetic appearance of a military assault rifle. These types of lookalikes have always had their followers, one of the first being the Jackal manufactured by the now-defunct Sussex Armoury but continued for a short time by no less than Air Arms. It’d be fair to say you either love or loathe this style of air rifle, but when they’re as striking as the Crosman TR77 you sure can’t ignore them. So without further ado, here’s what the latest ‘military’ style break-barrel action air rifle from the USA based Crosman Corporation has to offer.

The polymer stock’s unashamed military lines in many ways give it the look of an extended AR15 due to the overall length, especially the configuration of the butt section and forend.

The profiled butt section is fully ambidextrous, having a rounded off upper section thick enough to act as a ‘cheek-rest’ while it’s lower counterpart has a flat underside. This design is favoured by certain sections of the military because it allows it to be carried high on the body rested on/across the forearm of the shooting hand, so should the need arise it can be brought up to the shoulder quickly to take aim.

This section of the stock is linked to the main body by a slim oblong ‘arm’ which gives the appearance that it’s designed to be folded or extended. Neither is true because it’s a fixed moulding, but even so the attention to detail is such that you can even see adjustment and/or lock screws integrated into the moulding. Should you be wondering, the fixed reach to pull is the generally accepted length of 13.25-inches.

The standalone drop down pistol grip has a generous amount of stippling integrated into the design and combined with the butt section offers a very comfortable hold. The extended forend has an almost square section profile with outer ridging moulded into the rear section to offer grip for the leading hand. On some military assault rifles the stock is designed in such a way so the hand is kept away from the barrel to protect it from heat generated by ‘bullets’ streaming down the barrel on full auto, as well as ejected hot gasses.

Incidentally, the thick heavily ridged black rubber butt pad friction fits onto the rear of the rifle and once pulled off reveals the hollow butt section that Crosman say is a storage compartment. On certain military rifles, cleaning tools are kept in a similar housing, but for the airgun hunter I see little use as you’d not want anything rattling around in there; but I suppose it could be used to hold a small First Aid kit.

Despite the military style stock, the metalwork it holds is a standard break-barrel action. Interestingly, in the States there are two other versions of this rifle that ‘gives up’ the spring and piston in preference for the company’s Nitro-Piston power plant. One (the TR77NP) has the same length barrel while the other (TR77NPS) has a shorter carbine size barrel. I mention this as the spring powered TR77 has quite a lengthy barrel including what the company term as a ‘Tactical Muzzle Brake.’ Cosmetically, the outer of the brake has stylish fluting but for practical purposes it just acts as a handy cocking aid. Not that it’s really needed as the 18¾-inch barrel (including muzzle brake) gives enough leverage, allowing the rifle to be cocked very easily and surprisingly smoothly. In the open position, for direct pellet loading you can’t fail to notice the oversize wedge shape détente lock and chunky breech seal. When swung back to its original position, there’s no doubting the reassuring clunk as the barrel locks back up solidly in the close position after cocking and loading.

While there are no open sights, the rifle comes bundled with a CenterPoint 4x32 scope plus a set of two-piece mounts that neatly fit the optic onto the 11mm dovetails. Once scoped up I set the .177 calibre only rifle for a 25 yard zero using Bisley Magnums.

Due to the rifle only weighing a tad over 6lbs and the fact it’s a full-power mechanical action rifle, I expected it might be a tricky one to tame, but Crosman have developed their springers – especially designs such as this – and other lightweights to the point when unruly recoil isn’t an issue. In fact upon firing, not only is recoil very low for such a lightweight rifle but muzzle report was equally so.

The military-style drop down pistol grip gives you an ideal hand position to control and operate the 2-stage adjustable trigger unit. It also incorporates a very useful in-guard manual trigger safety blade that can be pushed forward with your trigger finger to disengage to take a shot. When you put the rifle on safe by pulling back the lever it almost touches the main trigger blade. This not only effectively ‘blocks’ trigger action internally but if you’ve left the safety on and need to take a shot pretty quickly you’ll immediately feel the safety blade blocking access to the main one so can quickly disengage it to take a shot. In some cases this might just help you get a shot at a target you might otherwise not have had the chance to due to having to quickly faff around disengaging a safety positioned elsewhere. As for accuracy, I had no trouble producing ½-inch c-c groups at my set zero and would feel more than comfortable in hunting at close to medium range with this rifle.

The Crosman TR77 will obviously be a hit or miss with shooters due to its blatant military style cosmetics. Hopefully not only Rambo wannabes will be attracted to it because the TR77 handles superbly due to the very welldesigned stock, and is accurate and powerful enough to be used for many general airgun hunting situations. And, yes, it‘s also a lot of fun to shoot!

SIGHTS:
No open sights, but comes with a CenterPoint 4x32 scope plus mounts O/A Length: 43-inches