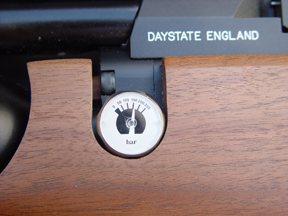 It seems like every month we receive a new air rifle from Daystate… not that we’re complaining, it’s great to see a British company being so innovative, and what’s more, being successful with their new products too. The latest rifle to come from the Staffordshire based company is the Air Ranger, a fantastic ‘buddy bottle’ multi-shot that we first saw at IWA 2004, but then the rifle was going to be ‘export only’ or ‘on ticket’ as it put out two different power levels… 60ft/lbs or 90ft/lbs!  Because of lots of public interest, Daystate have changed their mind about the ‘export only’ status of the Air Ranger and have decided to introduce it in a UK legal limit (12ft/lbs) format. This means that it has a huge shot capacity – 500+ shots per charge - instead of the massive power output of the original FAC version. Even so, Daystate were being cautious about the new rifle, and were intending to keep production fairly limited and only supplying four of the larger UK airgun retailers. Yet even before we had finished writing this review, Daystate had taken so many orders for the Air Ranger that they have confirmed that the rifle will now be placed alongside their regular range of precharged pneumatics.

While I was testing a .177 version of the Air Ranger for GunMart, my colleague Pete Wadeson was testing a .22 model for our sister magazine, Shooting Sports, in fact it’s the latter rifle that appears on this month’s front cover. Apart from the calibre and shot capacity, the two rifles were identical, but it did allow us to compare notes and get an idea on how they would appeal to the hunter and the target shooter.

So let’s take a look at the build and design of the Air Ranger, and without a doubt the first thing that you will notice is that huge 500cc ‘buddy bottle’ air cylinder. This high capacity bottle was originally chosen when the rifle was going to be FAC only, as it would give a reasonable amount of high power shots. With a recommended fill pressure of 230-bar this bottle gave around 500 shots at approx. 11.7ft/lbs with our .177 test rifle, and Pete Wadeson has reported that the.22 model clocked up an amazing 700 shots as the larger calibre is even more air efficient. This ‘air economy’ is ably aided by Daystate’s Mk3 Stainless Steel regulator which not only helps to give more shots but also, more importantly, keeps each shot consistent with the last – more of this later. Although the rifle uses a ‘buddy bottle’ as an air reservoir, you don’t have to remove it to fill – instead you just attach an air charging line via a quick fill valve at the base of the action.

The next thing to comment on is the walnut thumbhole stock which, for an ambidextrous design, not only feels practical, but it looks good too. Starting at the fixed rubber buttpad, the top line rises gently to a much higher padded cheekpiece which dips slightly as it meets the action. The thumbhole is large and ‘scooped’ from both sides and the upright pistol grip that has four panels of bordered chequering (two each side). This quite extensive and well cut machine chequering, although not commonplace, is now appearing on quite a few air rifles in the mid to higher priced section of the market. I for one quite like it – it gives fairly standard timber a satisfyingly expensive look.

The lower edge of the stock forms an integral trigger guard and extends into a fairly curved forend finishing just forward of the air bottle’s ‘neck and shoulder’. This gives you a convenient reference point for your leading hand to support, rather than holding on to the cold metal of the air bottle itself.  A simple air gauge sits in a slot on the left hand side of the stock – a handy little feature which gives a good indication of the amount of air left in the bottle. Pete Wadeson mentioned that the gauge on his rifle stood a little proud of the stock, but I can’t honestly say that I noticed it throughout the extended test period. In fact I never noticed it at all, even when I should have – as I’ll explain later. Seriously though, I think if you are going to have an integral gauge, it’s better to have it on the side of the stock where it is ‘out of the way’ when the rifle is in use.  If a gauge is on the bottom of the stock it could be damaged when resting the rifle to take a shot, while if it’s on the front of the air bottle (the most common position) you are actually pointing the gun at yourself (or over your shoulder) when reading it!

Above the air bottle sits the 17” Lothar Walther barrel which is fully shrouded with a 0.75” tube giving the rifle a ‘bull barrel’ look. The tube also contains baffles to actually form an integral sound moderator. At the muzzle end of the tube there’s a knurled end cap which protects a standard 0.5” UNF thread for attaching an additional sound moderator if required.

The bolt action is very similar to that found on the Daystate X2 and it takes the same ‘ratchet’ 10 shot magazine system. The magazine has a horizontal slot that lines up with a ridge in the receiver and a small metal ‘stop’ pin that can be mounted on the left or right to allow loading from your preferred side. To remove the empty magazine you first set the red coloured trigger block safety lever at the rear of the action to ‘Safe’ by moving it to the left (anti-clockwise). You then just rotate the rifle’s bolt 45º then pull it fully back, then slide the magazine out to the left or right (depending on how you’ve set the stop pin). To fill the magazine you place a pellet through the large hole in the bottom of the casing until it seats in the first pellet chamber, making sure that the pellet skirt clears the outer casing edge. You then rotate the inner alloy cylinder anti-clockwise to line up the next empty chamber, then each additional pellet is loaded one at a time until all ten chambers are filled. The magazine is then replaced in the receiver and the bolt is returned to its original position. Extracting and returning the bolt will also have cocked the action. The rifle is now ready to shoot once you’ve disengaged the safety lever by moving it clockwise (right).

The top of the receiver block is dovetailed either side of the magazine to take scope mounts. I used a set of reach forward mounts – which are quite high - as they were conveniently already attached to my chosen scope, a Tasco 4-16x42, but standard ‘straight’ mounts would have achieved the same result, however, check that your choice of mounts is high enough to clear the rifle’s magazine.

The rifle felt comfortable in the sitting, kneeling and standing shooting positions. I thought that it might feel a little front heavy due to that extra large bottle and the double skinned barrel, but although it’s no lightweight it still balances just forward of the trigger. All up, with scope and mounts, it weighed 10.2lbs, which is lighter than many FT air rifles I’ve used – and even some of the heavier hunting rifles. If you really want to shed a few ounces, you can opt for a 400cc bottle rather than the standard 500cc bottle, but then of course you will also lose out on shot capacity – there’s always a trade-off!

Now we come to the trigger, which I haven’t mentioned before; saving the best to last. The release was extremely good with a short, light first stage, a definite stop, then a clean and positive break. If you like to make fine adjustments (or ‘fiddle about’ as we say in the trade) you have to remove the rifle’s action from the stock to adjust it, but you can then alter the first stage travel, second stage weight and trigger angle. As it was, the Air Ranger’s standard trigger set-up it suited me just fine, so I for one wouldn’t alter it.

Off the bench it quickly became apparent that you could easily get field target accuracy from this .177 version of the Air Ranger. Best five shot groups edge to edge (with Daystate FT pellets) were sub .30” at 25 yards, around .50” at 35 yards, virtually the same at 45 yards and within an inch at 55yards. Even with 40 yard standing shots, the 40mm knockdown was guaranteed to clatter down – even a 25mm spinner at the same distance wasn’t safe.

Throughout the range tests the rifle remained very quiet, any muzzle noise being dispersed by the barrel shroud silencer. During the final part of the test I did attach a Parker Hale Phantom sound moderator, but it really wasn’t necessary; this rifle is a quiet rifle straight out of the box.

As a matter of interest I recorded samples of shots from a full bottle at 25 shot intervals throughout the charge (492 shots were fired in all before the pressure dropped away). Using Daystate’s own FT brand pellets (8.49 grains), most of the shots were only separated by single figures in the 780-790fps range and the highest spread was unsurprisingly between shot #1 (792fps) and shot #475 (775fps) – this is a quite unbelievable 17fps over almost 500 shots. Equally unbelievable is the fact that I forgot to check what the gun’s own air gauge read at this low point in the charge before I refilled the rifle – doooh! Another Homer moment.

The Air Ranger is an excellent rifle from Daystate, and no doubt one that will prove extremely popular with hunters; there may even be a few FT or Hunter FT competitors that will give it a try – it’s certainly accurate enough. Possibly the biggest attraction will be that huge shot capacity – 500 in .177 and 700 in .22 – but it’s the consistency, quietness and of course that extremely important accuracy which should really be the big selling points.