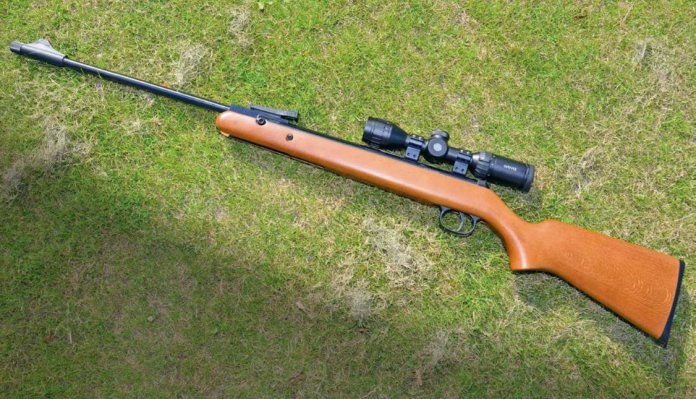 If it’s a traditional springer that you want, then look no further than the super sleek, Diana 34 EMS. It’s one of the newest models in the company’s line-up and a prime example of what they do best.

OK, let’s not pretend we have anything particularly groundbreaking on our hands here, but the presentation and build quality alone, are enough to arouse the interest of genuine airgun enthusiasts. That elongated forend and super sleek beech woodwork are very attractive, and the ultra-clean lines remind me of one of my favourite rifles from this stable - the Diana 280. There is a synthetic stocked version available incidentally, for those that feel the urge.

What sets the 34 EMS apart though, is the longer and larger diameter compression cylinder, where Diana clearly have one eye on the FAC market. Other key features? Well, the renowned T06 trigger is here, fibre optic open sights, an adjustable breech, automatic safety catch and that screw cut foresight/muzzle assembly. All combine well here, in the 12 ft/lbs UK version.

Here’s a thing - take a close look at this rifle’s profile and a fair assessment has to conclude that it all looks very familiar. Undoubtedly, there are a few rivals out there that follow extremely similar lines, yet cost a fraction of this model’s RRP. But be warned; whilst imitation is indeed the sincerest form of flattery, those cheap and cheerful rivals are just that - imitations.

Pick up the 34 EMS and the quality is immediately apparent. Traditional spring powered break barrel, it may be, but Diana’s prowess in this area is such that their build quality and refinement just elevates this model from the norm. Granted there are a few plastic components: the trigger guard, cylinder end cap, rear sight, foresight assembly and even the butt plate, but everything is well made. Look past such vulgarity, and the lustrous chemical bluing of the 19” barrel and that sizeable cylinder, well and truly save the day.

There are some rumblings on the grapevine that Diana are apparently deliberating over a system that allows for the barrel to be changed further down the line, to a different calibre, and also for the spring piston internals to be swapped out for the company’s N-Tec gas ram mechanics. Whether these ideas will see the light of day in practical terms, and whether they will be available to the UK market, is, of course, a different matter.

So how does this full-size sporter shape up? Firstly, mounting a scope is a lot easier than with many break barrels, given that extra-long cylinder. I’ve lurched towards scope use here, but the fibre optics supplied as standard offer a great sight picture and should at least be trialled for a warm-up period. Two minor gripes here though - firstly, the rear sight, whilst fully adjustable, requires a small Allen key and a screwdriver to set, with no user-friendly finger wheels to be seen. Secondly, grip the barrel over the foresight, to cock the action, and that fine red element looks vulnerable. A simple hood would have helped here.

A quick nudge is needed to release the breech, and whilst the barrel was a little stiff to move on test, cocking effort is very manageable. My usual method is butt firmly into groin, to gain stability, and one negative point here concerns that rather basic plastic butt plate. Minimal grip and no comfort! On a more positive note, attention to detail comes with the inclusion of that nylon stud underneath the action, to eliminate any rattle from the linkage.

With the action open, I found most ammo used would simply drop straight into the chamfered breech, so with such a slack fit, care needs to be taken to ensure the pellet doesn’t drop out before the action is closed. With those chunky bolts on each side of the action, the idea is that it is an adjustable system, to take up any wear further down the line, so tension can be slackened for comfort at any stage, or tensioned off if you feel the jaws are set too tight for that matter.

We mentioned the inclusion of the T06 trigger and this really is a nice technical advantage, given the wide, well-shaped blade, and the lightness of the release. There’s adjustment for first stage travel, second stage weight and sear engagement. I shot the 34 as factory set, and other than a small amount of creep, was perfectly happy, which speaks volumes.

Trip the trigger and the action releases with more of a mild bounce, with no harshness and minimal vibration. So, I’d guess there are recoil killing devices employed within, such as a tight spring guide for starters. As for handling, that elegant, yet functional rounded forend feels great in the aim, and with practical stock proportions, pleasant grip and that excellent trigger, this Diana easily overcomes its minor faults. A more pronounced cheekpiece would be nice, but hey.

One final detail is the option to spin on a silencer, as the muzzle comes screw cut with a 1/2” UNF thread. However, at 46” already, the result may be just a little unwieldy.

Using Air Arms Diabolo Field pellets, the chronograph recorded a 10 shot string with a total velocity spread of just 13 FPS, which is good stuff. Unsurprisingly, this translated into some tasty down range performance, and with shot clusters around 3/8” over 30yards, I was always going to be sad to see this gun returned. Not perfect by any means, but get past the niggling minor shortcomings, and what lies at the heart is a serious airgun, capable of full-on performance.

Diana airguns are still well respected by enthusiasts in the know, certainly for their spring powered fare and this model 34 EMS is a classic example of everything we have come to expect from this premium German brand. Great build quality, traditional smart profile and a level of performance that’s hard to fault.