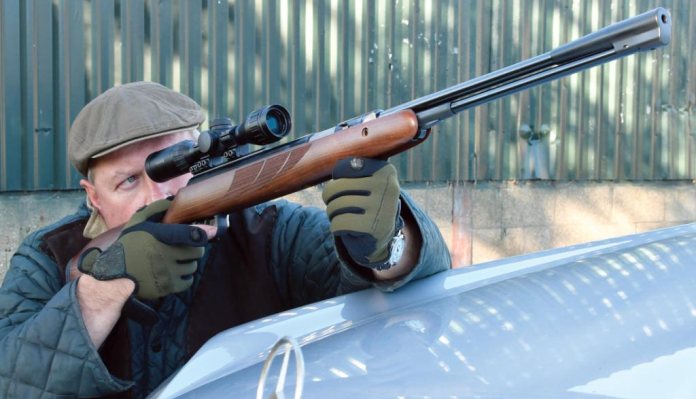 I was recently asked by a friend, what I thought of Diana as a brand in general, and my easy response was that it would normally sit in the top bracket, alongside the likes of Weihrauch and Air Arms, certainly with regards to springers.

Finish and build quality are key selling points that mark out the superior brands and Diana, or Mayer Grammelspacher to be more precise, have been making airguns for longer than many of their fan base have been around. We are talking quality spring powered fare here, so I was keen to get hold of one of the latest models, the Diana 430L when I first saw it listed in their new catalogue a while back.

Checking my records reveals that I did test a Stutzen model 430, back in 2010, which, as the name suggests, sported a near full-length stock, so we are talking a revision on a theme here, rather than a totally new concept. That said, the new 430L does look particularly sleek, with that elongated forend, subtle lines at the breech, laser cut chequering, and that nicely proportioned muzzle/lever catch assembly. The specification includes a sliding breech, underlever spring powered action, raised scope rail, and the T06 two-stage trigger unit.

So, what we have here is a sleek, stylish, full powered sporter, that’s a direct rival to the HW77/97, and Air Arms TX200 models, yet comes in a bit lighter. So, how does it stack up?

The 430L is listed as a compact model, yet it still spans 43inches, so perhaps they are referring to the slim-line beech stock, which is very graceful. Laser cut chequering looks the part, covering both the slimmed down pistol grip and forend, although I would extend the chequering up front, for a more practical feel where it’s needed. That rounded tip feels super comfortable in the leading hand and the rubber pad looks neat, but a more prominent cheek piece would be nice; a common fault of this style of rifle, admittedly.

Diana, as mentioned, are famed for their quality finish, and this model 430L is a good example of what they are all about. The blued main cylinder, barrel and under-lever are all treated to a deep chemical bluing, which is beautifully applied and a mirror finish. Contrasting nicely with this, is the cocking lever axis assembly and muzzle/catch assembly, which are matt black. The safety catch and trigger guard are the only plastic components, yet, I had to look closely to confirm that fact, so I wouldn’t lose any sleep over it. Wood to metal fit is exemplary and, overall, there is an air of class with this model, which really is classic Diana.

Fitting a scope to this type of rifle requires some consideration, so as not to foul the sliding breech area with oversized glass; and to this end, I bolted on a compact Hawke 2-7x32 Airmax scope, which seemed to perfectly compliment this model.

To cock the action, the lever just pulls free from its springloaded catch, then needs to be pulled all the way down until the cocking linkage and piston engages the trigger. At this point, good practice dictates that you keep hold of the lever with the left hand and chamber a pellet with the right. Cocking effort is quite significant, so an all in one motion is advisable to gain momentum.

There’s a machined chamfer on the breech and this meant that my initial batch of JSB pellets felt loose, which was a bit disappointing, as part of the attraction and advantage of direct feed into the barrel, is being able to feel an overly tight or slack pellet, and then discount that shot, all in a bid for improved consistency. The chamfer makes it easier to chamber a pellet flush, but that misses the point.

The firing cycle on test, was quite impressive and, whilst the 430L was fairly loud, the shot was a quick snap, with no resonance and pretty soft recoil, so the manufacturer is obviously using recoil dampening components inside. However, on the downside, the safety mechanism on my test rifle was faulty. That small catch to the right of the sliding breech should need to be depressed in order to allow the cocking lever to return to the closed position- all part of the safety system. On my test gun, this catch didn’t need pressing, and just slid up and down! A bit surprising for this class of rifle, and I’m not sure how it got through Diana’s quality control.

This detail aside, the performance of the 430L couldn’t fail to impress. Okay, admittedly I was reminded that spring guns need either a onepiece mount or an arrestor pin/ block fitted, as the two-way snap will inevitably shift any glassware after a while. As mentioned, felt recoil was fairly modest with this model, yet a slight movement of the mounts soon had me fitting a Sportsmatch arrestor block, snug up behind one of the mounts, eliminating the issue at a stroke. The T06 two-stage trigger works a treat, being perfectly weighted, crisp and predictable. The neat cutout in the bottom of the sliding breech well, is also a welcome piece of design work, mirroring the Air Arms Pro-Sport. Fumble a pellet whilst loading, and it will drop through the large shot, out of harm’s way, instead of jamming the chamber.

Sub half-inch groups (3/8-inch) over 25-yards, using Air Arms Diabolo Field pellets, was an impressive start, but with the 430L, it was as much about how it went about it, as the final result.

So, overall, not perfect, but a very enjoyable rifle to use, with a level of both performance and finish to satisfy the serious enthusiast. Traditional quality fare then and just what we have come to expect from this famous German brand.