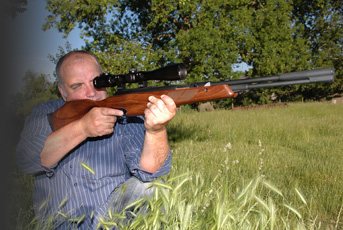 With 2010 being the 120th anniversary of the famous Diana brand of airguns, it comes as no surprise that this prestigious name should choose to celebrate such an event with the introduction of several new models. One glance at the latest product brochure reveals that Diana is clearly on the offensive, with a wave of upgrades and models catering for all tastes and budgets.

The flagships of the range however, have to be the new Target Hunter (TH) models, offering as they do, an impressive spec sheet. Three options carry the ‘TH’ badge, with Diana’s recoilless spring/piston model 56 heading the charge, including a no-compromise beefy thumbhole stock as part of the package.

A near identical, yet slightly more slim-line version of this woodwork, comes fitted to the other two TH models - the model 470 and the model 440.

On test here is the 440 TH, and a very striking piece of machinery it is too. Designed primarily with Field Target Shooting in mind, the configuration includes a competition inspired stock, along with the usual standard of component manufacture that we have come to expect from this top-end German brand.

I should start by explaining the difference between this 440TH and the 470TH version, as I was considerably confused until a proper read of the brochure revealed all. Basically, the 440 is just a slightly shorter, and therefore lighter version of its larger stable mate. This is hard to believe, when you consider the technical spec., as the 440 tips the scales at a rather significant 9lbs before the scope is even taken into account -  and this is the lighter model! You have to wonder just who would opt for the 470 model, carrying nearly half a pound more! Mind you, the model 56 Target Hunter weighs in at a whopping 11.1lbs, so Diana are clearly pitching these products at the mature, adult sector.

Of course weight is a matter of personal taste, and whilst I seem to now favour light to mid-weight rifles, plenty of shooters I know drill into the butts of their prized possessions, and add lead weights and the like, just to beef up the overall mass… so maybe I’ve answered my own question. This is a particularly popular trick that many FT aficionados adopt, and since the 440 TH has one eye on this sector, Diana’s marketing strategy may just pay off. Weight equals stability up to a point, and if the rifle is manageable, then the sheer mass can prove an advantage in the heat of competition, helping as it does to flatten out any breathing/pulsing aberrations.

The layout of the 440’s action largely mirrors that of the other top class underlevers on the market - namely that of the HW77 from Weihrauch, and the TX200 from Air Arms.

So just to clarify, a spring/piston powered action is primed via an under-lever cocking arm, which runs parallel to the barrel. Fixed barrel accuracy is the highly prized result.

Diana have dispensed with traditional chemical bluing for these models, opting for a non-glare, glass bead blasted metal surface. The end result contrasts well with the woodwork, affording a slick, professional air to the 440. In fact my only gripe on the visuals is the surprising inclusion of a plastic trigger blade. Given the upmarket target audience for the 440, the use of plastic in this area is inappropriate, since it actually slightly distorts under the pressure of the shot. That said, the let off is still reasonably light, and did not prove a barrier to good results as we shall see. That non-glare finish is practical in more ways than one, minimizing the chance of spooking the quarry out in the field, whilst also being far less prone to corrosion. Traditional bluing, as any enthusiast knows, has to be meticulously cared for with an oily rag, if rust inducing finger marks are to be kept at bay. No such fuss required with the metal finish here, although a light oiling would of course still be good practise.

Put in a Thumb

Back to the furniture. These new thumbhole target stocks really are nicely finished. From the angular yet supremely comfortable fore-end, right through to the butt, this stock aids the shooter and offers technical advantage where it matters. Perfectly applied laser-cut chequering appears at the front of the fore-end, and each side of the slim-line pistol grip. The deep box section just forward of the trigger guard allows the shooter to comfortably deal with standing shots from the supported target stance, or raise the shooters line of sight in a stress free manner when shooting from the sitting position (especially in my favoured over-the-arm style).

The thumb hole area is perfectly comfortable, but I have to highlight the fact that the slab-sided top join of the grip section means no provision is made for a thumb-up hold; instead forcing the shooter to use a thumb-through style at all times. The cheek- piece is prominent and in use gave perfect alignment when using the scope. Add an adjustable, deeply concave rubber butt pad into the mix, and I think we can safely say this stock handles! Diana pick out the new branding neatly with a ‘TH’ for Target Hunter, subtly cut into the woodwork just forward of the butt; and with the attractive grain of the beech timber all sealed in a heavy varnish, it’s difficult to criticize Diana’s presentation.

Before I could evaluate the accuracy of this new beauty, some glassware needed to be bolted into place, and Diana make this a simple affair by the inclusion of a sturdy raised dovetail rail. The crisply machined, chunky rails mean that any mounts get a good purchase, which all helps breed confidence, and in turn, clears the path to good results.

Cocking the action requires the under-lever to be gently released from its spring-loaded catch at the muzzle, then pulled down until the trigger sears engage with the piston. The attractive barrel weight doubles as the lever catch, but it should be noted that the lever is not locked when in position, so the fitting of a sling to the barrel would be problematic.

I found the cocking stroke required some significant effort here, with the point of sear engagement occurring when the lever reached 90degrees. With this 440 model conceding nearly three inches of barrel to it’s larger stable-mate, I suspect that the 470 is a little more forgiving in this area, as the lever would be correspondingly longer. Yet this is the trade off with this 440 TH; effectively the carbine of the range.

Pulling that lever back exposes the sliding breech, where the pellet can then be directly fed into the barrel. Attention to detail at the design stage means this rifle allows for any dropped pellets to just fall out of a cut-out in the bottom of the breech recess, in much the same way that the TX200 does from Air Arms. On closing the lever, once the safety tab has been depressed, the test model did display a curious judder from the breech cover, yet this had no detrimental effect on performance.

On the range, the balance and handling really began to show. The two-stage trigger, as previously stated, drops a point or two for the unacceptable use of a plastic blade, yet it still offers a fairly precise, light release, so results aren’t compromised to any great degree. Indeed with groups shot over 30yds at 3/16 inch, from the over-arm FT position, accuracy was, in a word, superb. RUAG sent in some 4.51 RWS Superfields for the test, and with results like that, I didn’t look elsewhere! On firing, this action felt a little harsh and in desperate need of a professional strip down and lube, yet the groups just kept forming.

Being significantly front heavy, the rifle just sat on the target from the sitting position, and that stock ensured that standing and kneeling all felt equally assured.

In short, the sheer weight and cocking effort of this 440Target Hunter, means it is a specialized tool, for fit adults only. That said, in the right hands, it clearly has the potential to be a winner, combining as it does, a comprehensive list of features, in a beautifully presented package.

And that sounds to me like a fitting birthday celebration for one of the biggest names in the business!