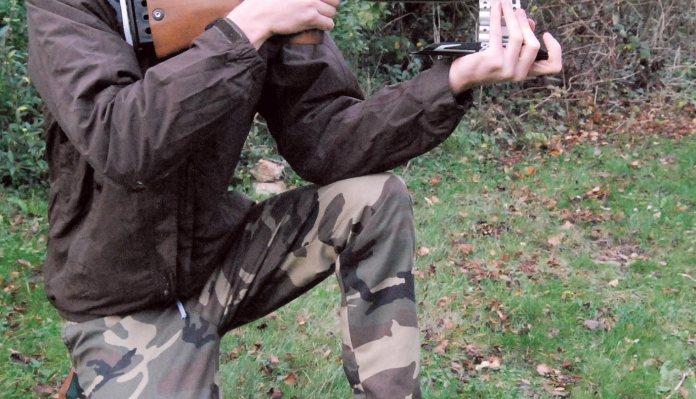 Not so many years ago, British manufacturers were dominant in the production of Field Target air rifles. Then, in the early 2000s, FT started getting bigger in Europe, the wheels of industry started to turn and manufacturers like Walther, Steyr and Feinwerkbau, already highly experienced in the manufacture of precision 10 metre Match rifles, looked at the possibility of increasing the velocities of such rifles and offering them to the world of FT.

Ten years later, Walther have dropped out, with no plans to offer a 16 Joule/12 ft lb version of the LG400, Steyr with LG110 range have pretty much taken over the top spot in the popularity stakes, backed up by a host of wins. British manufacturers are still in the fray though, as Air Arms now offer the FTP900 which is starting to find its feet, and Feinwerkbau have been tinkering away in their R&D department since ceasing production of the P70FT, which, ironically is the rifle of choice of the current World FT Champion Sergey Zubenko.

The fruit of that tinkering has resulted in the 800X FT, and the rifle we have here the 800 Basic FT, so, less blather, more rifle, let’s take a look.

The stock of the Basic is beech, which is pretty unusual in the modern world of aluminium and laminate, but it is a really nice shape and very comfortable, with an upright grip that flares from top to bottom in a sort of palm swell, slightly difficult to describe but very comfortable. Despite its looks, the stock has much of the adjustability of its rivals. It is also worth noting that it is ambidextrous, which I proved by getting my left eye dominant son to shoulder the rifle.

At the very back we have a rubber buttpad. This style is very much to my taste, although many shooters prefer much more complex pads. The pad moves up, down, left and right and the whole assembly can be moved in and out to adjust the length of pull. Next is the cheekpiece. This is made of black plastic and actually feels a lot better than it looks. It just about has enough height adjustment for my chosen style, where I like to keep my head as upright as possible. More height would be nice but would require a little ingenuity.

Further forward and underneath is a standard target type accessory rail, which can be used for a number of additions, such as strap mounts, hand stops and knee rests. Unusually, FWB include a knee rest, or hamster. This comes with two alloy blocks, which are used to set the height of the rest. The blocks can be slid the length of the accessory rail and are locked by a single screw. They can also be used to further adjust the height of the knee rest as well as the angle, which means it does not have to be parallel to the rail or stock. Lastly, the rest itself has a number of mounting holes, which are used to move it forward or back on the block to suit your style, they can also be used to cant the rest left or right. So for a basic looking stock, it actually has a lot of adjustability.

The first thing that really strikes you with the 800 action, which is common to both the Basic and X models, is the cocking lever… it’s very long. It is also very adjustable, with two screws allowing it to swing towards or away from the action and a third, which allows the angle to be changed as it is clamped to a round axle. It can also be easily changed from right to left hand operation to match the stock. Up top are a pair of separate dovetails, front and back of the breech opening. These are good for use with standard scope mounts if you want to use the Basic for HFT or you prefer a lower scope mount height. For a higher scope position, common in FT these days, FWB provide a cantilever mount, which is clamped onto the front dovetail.

The breech opening is below all this scope mountery and is designed to let the shooter thumb the pellets straight into the breech. I like this type of loading, as you immediately get a feel for what sized pellets fit the barrel. At the bottom of the breech opening, on the left side is a flat lever, this is the control for the dry fire facility, something often found on models derived from 10 metres Match rifles and very useful for setting up triggers. Talking of triggers, this one is fully adjustable. The blade clamps onto one of a pair of rails, so it can be biased to the left or right, moved forward or back and the blade turned left or right. A clever feature is the two knurled thumbscrews front and back of the trigger guard, these are used to adjust the first and second stage weights without the need for tools, neat.

The barrel has a full-length stainless steel shroud, which has a dovetail cut into its entire length, at the muzzle is a chunky looking black weight. Below the barrel is the alloy air tube, which, common to most European rifles, has to be removed to be refilled and which has a pressure gauge at the end. The air tube screws straight into the regulator. I don’t know why, after all these years, European manufacturers don’t offer quick fills as standard, but they don’t and in the case of the FWB it is not even an extra, which is a shame.

A little way back from the muzzle, there is a neat little support frame that the air tube and barrel pass through; many shooters like to free float the barrel of their rifles, and I am no exception, but for now it stays, as FWB obviously put it there for a reason.

Most of the metalwork is finished in a nice brushed black, with engraved details highlighted in silver, the remainder, including the cocking lever and rear part of the action are in brushed aluminium. All very neat and understated. So there we have the 800 Basic FT front to back, let’s get a scope mounted and see what’s what.

A Handful of Rifle

There are a few surprises with the Basic, the first of which is the weight. Due to the somewhat budget looking stock, slightly reminiscent of BSA’s and Falcons of the past, I was under the impression this was going to be a lightweight carbine of a rifle, wrong, this rifle is chunky and at 8.5lbs it also has some heft. Having adjusted the butt pad for pull, height and angle (it really is very adjustable), pulled the knee rest right back and tweaked the angle slightly; I popped my fave front focus Leupold up top and headed to the zero range. It took me all of four shots to get the Basic zeroed at 30 yards. The trigger is excellent, with a long, very light first stage, then a nice solid stop before an additional squeeze breaks the second stage, in a crisp and predictable manner. The long cocking lever is a little odd to operate for the first few shots, after that it becomes second nature and is actually better to use the longer you use it. Once the breech is open, there is plenty of room, from left or right to load a pellet and with a lift of the cocking lever the breechblock locks closed with a positive click.

The first place to visit was the chrono, and with a nice clean barrel and lightly lubed pellets I was getting strings of 803fps with almost no variations using Air Arms Express 7.9 grain pellets. With Air Arms Field 8.4 grain I was getting between 785 and 788fps, so more than acceptable variation. The feel of this rifle is good, with the point of balance just a touch in front of the breech but with the weight evenly distributed along its entire length. Having got some good groups using 4.52 Air Arms Field 8.4 grain pellets, I stuck with them for the whole test.

Shooting off the bench to start, I checked accuracy at 15, 30, 40, 50 and 55 yards. Out to 40 yards and a bit beyond, the Basic will genuinely lay pellet on pellet in calm conditions. At 55 yards I was getting strings of three or four pellets hitting the same spot, before a light wind wandered by and pushed the last shot or two slightly to one side. On average, I was getting around 10 to 15mm groups. I then did a point of impact test, as I have heard of POI shift issues with the 800s. I started with 200 bar in the air tube and worked down to 100 bar, using a combination of five shot groups and dead shots. I am glad to say that I saw no evidence on this rifle of the POI shifting.

On the course I fancied that the consistency of the rifle was improving, certainly in the sitting position at any range, 11 yards to 55 yards, I just needed to keep my point of aim steady and the target would fall. This is relatively easy to do, as the rifle is just so solid once on aim. Kneelers are where you start to feel the weight, or lack of it, so concentration is needed to keep the left/right wobble in check, but it’s not hard to do and the 40 yard kneeler target I was using went down time and time again.

Standers are my weakness, and this is where the overall feeling of lightness can take its toll. Out to around 35 yards I was fine, after that it was a bit more of a lottery, but club mate Mark Shepherd said he thought it was an excellent standing rifle because of the neutral balance, so you pays yer money and takes yer choice. One thing is for sure, the predictable trigger and fast-action means that if you do have to take a snap shot, then provided the cross hair is in the right place, the pellet will be too.

After concluding the shooting tests, I fitted a 150g weight to the accessory rail, and with a little fine-tuning, was able to damp out a lot of the wobble, significantly improving the kneelers and showing a measurable improvement to the standers. Sitters were never an issue.

The FWB 800 Basic FT is an excellent rifle, it is a good weight, well-balanced, fast, accurate, has a trigger that is seriously up to the job and a well-fitting ambidextrous stock, what’s not to like?

Well, on the down side, the cheekpiece does not quite have sufficient height adjustment to allow for a completely upright head position when the scope is mounted on the higher mount provided, at least not for me. Also, the supplied screw-in fill adaptor for the air cylinder is designed to work with a 232 bar dive bottle, I have a 300 bar dive bottle, so I needed a small brass spacer to prevent the whole thing leaking air badly. The adaptors are easily available and only cost a couple of pounds, which is why it is a surprise not to find one in the kit.

There is also no windicator or bubble gauge, but these are easily added and not everyone uses them, so I really am nit-picking here. On the other hand, the Basic comes with a high scope mount and a highly adjustable knee rest/ hamster, either of which would cost you sensible money to add to a standard rifle, so swings and roundabouts.

I am really taken with this rifle and will be using it over the winter in a variety of competitions. It is a very worthwhile addition to the FT/ HFT rifles currently available, and I expect to see more out and about in the not too distant future.