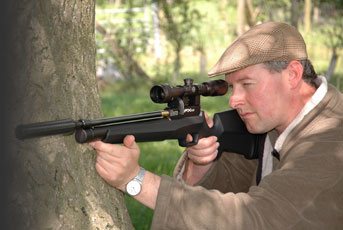 Those upstarts from Sweden are at it again. Hardly content with securing a major distributor in the UK in the form of Deben Group a while back, FX Airguns are clearly determined to meet the competition head-on, with an avalanche of new products and an eye for development that’s even got the likes of Daystate looking over their shoulder.

With FX Airguns headed up by acclaimed boffin, Frederick Axelsson, quirky design is a given, and there’s no denying the individuality of the brand. Space age compounds and components are utilized, with the inevitable synthetic stocks affording imaginative configurations to compliment the technical side. My test rifle is hardly an exception.

Just when you thought it was safe to place a confident order with the local dealer, for a multi-shot PCP tailored with the hunter in mind, along comes a flying spanner, to land firmly in the works!

Well here it is – the T12; a magazine fed version of the popular Typhoon model. In .22 calibre, that equates to 12 shots (as the name suggests) at the ready, whilst the smaller calibre puts sixteen shots no less, at the very fingertips of the most ardent hunter. That’s a full hunting session or two in most people’s book, before anything as unseemly as touching a pellet needs to take place - a welcome asset, and surely a confidence boost in the heat of the action.

So let’s see just what this new kit has to offer, and whether it makes the grade.

The Typhoon format is first and foremost a no-nonsense pre-charged pneumatic, that takes the conventional, tried and tested route to pellet delivery. Whilst other models in the FX stable may use fast-fire cocking handles, power adjusters and the like, the Typhoon remains true to the original PCP blueprint - offering a chunky straight line cocking bolt, in a relatively simple format. This bolt sits within a ‘u’ shaped track and is simply pulled back and down to access the breech. On the single shot version, a pellet is then rolled into the single shot tray. With this new T12, once the bolt has been withdrawn, the magazine can be pulled from the left hand side of the action to be filled; a process which we’ll come to later.

Several options exist with the Typhoon model, concerning the action length and stock material. My test rifle came supplied as a ‘k’ carbine (short action), sitting within the synthetic stock. In this format, the T12 is remarkably light, tipping the scales at a featherweight 4.2lbs! That fact alone makes this rifle suitable for ladies, shooters of slight build, and juniors, in one fell swoop; as well as being the dedicated hunting tool the designers had in mind. Curiously, I rarely get thanked by the manufacturers for making such an observation, yet surely the ‘all things to all men’ ticket is no bad thing.

The barrel of the T12 is fixed at the breech, and sits over the compression cylinder; being held within an ‘o’ ring at the muzzle end. Metal finish is something of a mixture, with the barrel itself treated to a traditional chemical blue, whilst the main compression cylinder and breech housing are coated in matt black - all to a good standard I hasten to add. On a hunting rifle, the toned down effect of the action must surely help to attract less unwanted attention in any case, keeping the ‘dazzle factor’ to a minimum.

Obviously, since the T12 comes with no open sights, the fitting of suitable glassware is of paramount importance, and to this end, the breech block sports deeply cut dovetails, to receive the scope mounts securely. One point to note here though, is that the fitting of any scope requires some thought, due to the sheer height of that magazine casing. With the top of the mag rising some 20mm from the action, high mounts are a must, with care still to be taken to clear the scopes objective bell and central turret block in the final positioning.

I fitted a Hawke Airmax 2-7x32AO optic, and found the optimum position saw both mounts behind the magazine. This neat little scope incidentally, seemed to perfectly compliment the T12’s handling, without unbalancing the rig in anyway.

OK; we’ve got this far and scarcely mentioned the stock. Well all I can say is, whilst being a traditional walnut freak, I’m coming round to the benefits of synthetic compound stocks at an alarming rate; and with all the weather/ temperature change-resistant properties on offer, it’s difficult to argue against the tide.

The stock offered on this T12 is an extremely slick, synthetic moulding, being both attractive and curiously cosy to the touch. A fine stippled effect to the surface means this material is best described as ‘grippy’, which is just as well since no chequering panels or such like are used.

The pistol-grip shaping is effectively near ambidextrous, but the right bias to the bolt renders this an irrelevance. Maybe a slightly more hand filling grip would be nice, but with the long, graceful forend sporting angular finger shelves, the functionality is spot on. My only gripe stock wise, concerns the complete lack of any butt pad - a compromise too far in my book - with a soft strip of rubber surely having minimal impact where final costings are concerned. As it stands, the solid synthetic butt doesn’t exactly hug the shoulder.

Triggers on PCP’s should on balance, be fairly good, given their relatively easy life tripping a small hammer, and the unit fitted to the Typhoon series is both comfortable to use (nice broad blade), and slick in operation i.e. crisp, reasonably light, and wholly predictable; so a thumbs up here.

Given the short action of this carbine T12, balance is a little vague. Opt to remove the neat thread cover at the front, and spin on your favourite sound moderator, however, and the benefit is two-fold. With an Airstream model from Daystate screwed into place, balance was gently nudged towards the muzzle, whilst the rifle’s report was tamed to a whisper. Whilst the profile of some rifles can be ruined by the clumsy addition of silencers and muzzle brakes, this T12 really comes into it’s own, somehow feeling complete.

And so to the T12’s raison d’etre - the multi shot facility. FX supply this rifle with a magazine which is best described as similar to Theoben’s offerings. Whilst the design is slightly fragile compared to some, with practice and care, the system works well.

What differentiates the FX mag from Theoben’s is the added quirkiness to the loading regime… as follows: With the magazine’s clear cover facing you, turn the cover anti-clockwise against spring pressure,  all the way round until it stops.  Still holding the cover against the spring-loaded mechanism, flip the cover over and load a pellet SKIRT first into the one visible chamber. The cover is now held in place, and the mag can be flipped back again and pellets loaded conventionally, head first into all the remaining chambers in turn; finally closing the cover.

With the rifles bolt pulled back and down, the mag can be pushed into place, and the bolt pushed forward and down to load the first pellet. This cycle is just repeated to index subsequent shots. On test, once a methodical approach was adopted - such as keeping the mag straight when locating into the action - the system worked well.

Charging the T12 to 200bar is super fast thanks to the quick fill probe, simply pushed into the inlet valve hole at the front of the cylinder. Whilst the design is simple, I still have concerns about foreign bodies finding there way into the valve. Some form of plug/cover would be a good move here.

My carbine length spec is good for a quoted 50 shots, born out virtually to the shot on my own tests. More shots exist at decreasing power but 50 satisfyingly consistent shots are more than enough in my book, and even the best hunting forays will be well served.

On the range, the T12 proved remarkably unfussy about pellets and printed sub half inch groups at 30yds with ease using the FX pellets supplied, good old Daystate Select (a top class bench mark if ever I saw one), and Crosman Accu-pell. Many groups were just tight ragged enlarged holes, and with practise, I reckon this T12 could be one hell of a performer. The ultra light weight can take some getting used to, but the basis for raw accuracy is clearly here.

In this new T12 multi-shot version, FX have breathed new life into their Typhoon range. With a classic extended length cylinder and walnut stocks all available as options, this T12 is an attractive proposition for the shooter who wants to keep things relatively simple, yet enjoy the merits of the multi-shot PCP format; and as such, deserves to succeed.