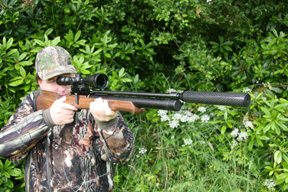 It seems that since Swedish gun guru Fredrik Axelsson designed his now familiar and established 8-shot removable rotary feed drum shape magazine action, many UK gun manufacturers have licensed it for use in their own branded rifles – most now discontinued.

Now Deben Group Industries look set to raise the FX brand ‘awareness’ even higher, as they’ve taken on the whole FX range for distribution through a network of FX centres already set up throughout the UK. That in a long winded way brings me to the point that via Target Sports of Bolton I got the chance to try the FX Cyclone Standard – a stylish 8-shot side-lever action PCP in high quality walnut stock.

I realised on first inspection that FX rifles are a little bit ‘special.’ In the range there’s a familiar looking single-shot, a few others of various different action designs but as mentioned previously all the multi-shots run the familiar and time tested 8-shot removable drum shape magazine system. The FX Cyclone uses a side-lever action with a build and performance that is first rate. So firstly a look at the stock, as it’s here you notice major changes, albeit some very subtle whilst others jump out at you, such is the difference it makes to this classy looking multi-shot PCP.

The butt section of the walnut woodwork features a relatively high, angular and distinctive shaped right hand roll over cheekpiece, coupled with an adjustable sliding rubber butt pad. The neck is quite narrow and there’s a very useful and generously sized thumb shelf that slightly angles away from the shooter, creating a channel for the thumb to slide up for adopting a ‘thumbs up’ hold. This feature and design showed themselves to be a bonus when I got into the test proper –more on that later. Another good feature was the generous and quite deep scalloping underneath the ‘drop down handle’ of the side-lever, where it meets the furniture on the right hand side of the stock, making it all the easier to grab hold off. The forend itself is quite lengthy, slim, and has a rounded profile ending at the front in a stubby but sensibly sized Schnabel tip. Panels of skip-line chequering adorn either side of the grip and forend. All are generously proportioned and ideally positioned for a leading hand hold. The FX brand name is integrated into the ‘panel’ itself.

Inset into the underside of the stock is a larger than usual air gauge indicating the status of air in the reservoir. The rifle is filled via a push fit probe that simply enters into the exposed yet discreet fill point underneath the reservoir, which has been slightly set back from the substantial barrel support. A 220-bar fill gives approximately 200 full power shots in .22 and 160 in the smaller .177 calibre – the latter being the calibre of the rifle on test.

Incidentally a 3-position power lever is set on the left of the action. Personally I wouldn’t use this but it does offer the opportunity to have the rifle set on 6ft lbs for plinking, approximately 9ft lbs for very close range rat or feral pigeon shooting, or the full 12ft lbs of power.

You may think you’ve got the action sussed by just looking at the rifle, but there’s a whole lot more clever features that show themselves during the loading and cocking procedure.
Firstly, to load the 8-shot magazine, you obviously have to release and remove it from the action. Pulling back the side-lever until it locks in the rearward position cocks the rifle and on the return it probes a pellet from the magazine. Now here’s the clever part – during the first part of this operation the brass pellet probe plunger comes out rearward leaving a ridged brass bush sitting flush against the rear of the action. Manually pulling/sliding this rearwards so it travels back along the axis of the plunger, you can see it has a separate spindle attached above so on withdrawal the spindle releases the magazine. Although this is much better than any fiddly forward position retaining pin, and as ingenious as this magazine release system is, you still need to have a hand waiting to stop the magazine being ‘ejected’ from the right hand side of the breech. However, this new magazine retaining system is far superior and easier to use than the early versions.

Once the magazine is removed, you can load the 8 pellet chambers with the centre boss of the magazine facing you. Once you’ve loaded all the chambers, simply reverse the release procedure, return the side-lever to its original position and you’re good to go. However, even here there’s a handy and unique feature, that being a cocking plunger that you can simply push in to return the side-lever to its original position. Known by FX as the ‘thumb return’ system, I actually preferred to operate the action in this way.

Up-front the rifle’s threaded for a standard ½” UNF silencer and as (at present) FX doesn’t have their own brand sound moderator, I opted to fit the Logun CCFC (Carbon Composite Fibre Construction) due to it being a light and very effective unit. I say this as the rifle deserves to be left a lightweight, and so needs no undue forward weighting. Incidentally, muzzle report even without a can fitted is surprisingly low for a PCP and if you don’t require the extra length or suppression the rifle is relatively compact at 37-inches. Adding the Logun CCFC silencer did push that to a quite lengthy 44.75” from butt to muzzle, however it doesn’t feel unwieldy and with any quality can of your choice the FX Cyclone becomes one of the quietest ‘non-customised’ rifles on the market.

I scoped up with what I considered to be a very good companion for the rifle. That being a Hawke Airmax 3 – 9 X 50 scope with MAP 6 Ballistic Reticle. Fitted in high mounts it set the rifle off a treat, and the inherent handling and balance weren’t affected in the slightest. Even with a scope and moderator on board, this lightweight PCP refused to push the scales much over 8lbs.

The 2-stage adjustable trigger mechanism is a workmanlike looking unit that’s very precise in release. The well-curved alloy trigger blade is quite broad and to go back to where I mentioned the grip configuration, it’s upon shooting when you appreciate the thumb shelf, as this allows you to adopt a sort of ‘hanging’ hold from the top of the slim neck rather than hold on tight at the pistol grip. Obviously you can hold as tight as you like as it is recoilless but treat this rifle with the respect it deserves and it’ll bring in some very impressive groupings. Also it’s upon shooting that you realise trigger hold, safety and position of cocking lever are all within easy reach – some may feel the perfect set up.

After zeroing at 30yds the .177 size clusters become boringly easy to achieve with any quality ammo; this is obviously due to the combination of the 19.5” semi free-floating Lothar Walther Match Grade choked barrel, regulator and the quality of the trigger release. A nice touch, but one that can easily be overlooked, is the trigger mechanism. This is fitted with a manual safety which takes the form of a small lever positioned on the right hand side of the action directly above the trigger blade. Pushing the recessed end cap blade forward puts it on ‘Fire’, a red dot showing on the action, so simply ease it back with the thumb of the shooting hand to put it on safe. This is a very well sited unit as it allows you to operate it without your shooting hand leaving the pistol grip.

When I heard the news that Deben Group Industries Ltd were taking the bold step of adding the FX range of air rifles and pistols to their range I must admit I thought it a bold move. They haven’t taken this step lightly either, as the dealer network already in place throughout the UK is quite extensive and well stocked. As for the FX Cyclone itself, it’s also available in a dedicated left hand walnut option and a synthetic stocked version. Carbine options are also available.

After testing I was more than pleasantly surprised at the changes and little features that have been added. In a nutshell, the FX Cyclone is a stylish, high performing, lightweight PCP with a super smooth action that could quite easily ‘blow’ some of the competition away…