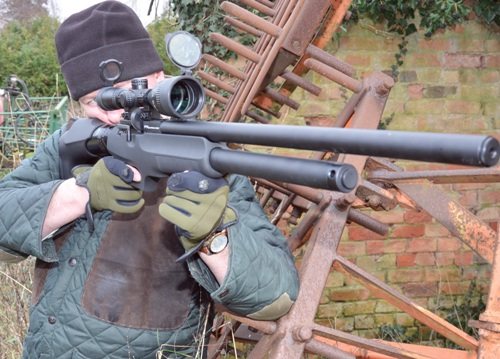 FX Airguns of Sweden are among the most innovative on the market, and their range of models and specifications has really grown in recent years. Admittedly, the company’s emphasis on synthetic compound stocks may not be to everyone’s taste, but it’s something they do particularly well.

That’s not all though, for their ability to turn design on its head and shun the conventional approach is also a major plus point for their growing army of fans.

On test here, is one of their most radical models to date – the MKII version of the Gladiator, and visually, it’s a stunning piece of kit. But it’s more than that. In fact, if you were to set out to produce a demonstration/ concept rifle, showcasing pretty well everything this go- ahead manufacturer is about, this Gladiator MKII would be very close. ‘Bristling with features’ is a fair description, but once you bear in mind that there’s little change from £1200, a closer inspection is very much warranted.

So here goes. The Gladiator is a pre-charged pneumatic, sporting a huge on-board air supply, a multi-shot magazine system, side-lever cocking, match trigger, full-length shroud, synthetic two-part stock, integral pressure gauge, and adjustable power output. And believe me, that’s as impressive in the flesh as it looks on paper.

Quite a list, and with so much going on I genuinely overlooked possibly the most surprising feature of all when I first took delivery of this rifle: the fact that it sports a large buddy bottle AND a main air cylinder. Most PCP airguns opt for one or the other, so to have both means vast air reserves.

This Gladiator MKII is instantly recognisable courtesy of that radical profile – the huge oversized, full-length shroud has much to do with that, and I reckon the visuals work well. That distinctive and finely machined breech block, first seen on the Royale models, is treated here to a matt finish, more in keeping with the shroud and cylinder coating.

FX are indeed the masters of synthetic stocks, and the two part configuration here, is impressive. The main stock section is well-shaped, and the feel of the material is pleasing, since it manages to be slightly grippy, yet soft to the touch. Build quality overall with this gun, is impressive, with occasional tiny air holes in the moulding around the checkered pattern area being the only real negative. Otherwise, execution is spot-on. In keeping with many stocks these days, FX opt for a totally ambidextrous design, but with the drop-down grip suitably slim, and some swish moulding throughout, little is compromised where handling is concerned.

FX still utilise their slide on cheekpiece/butt assembly, which sits over the rear buddy bottle. This section is fixed in place by tightening a small grub screw, and with this slackened off, the cheek piece can be moved forward or back to suit, along the angled bottle, increasing or decreasing length of pull in the process. I found the cheek still sat rather high, but some adjustment is here. As for the butt pad, my test gun already had a split, where the rather fragile pad pressed against the bottle; presumably after some less than careful adjustment. A weak point nonetheless.

The buddy bottle is 400cc; combine that with the 145cc main cylinder and you end up with what can only be termed a huge count of approximately 700 shots in.22. Fill pressure is 220 bar, but with shot count off the scale, a prudent move would be to fill to lower pressures of around170-180 bar, placing everything under less stress and still gives 500-600 shots.

The push probe method makes charging a piece of cake, and since this operation takes place at the front of the main cylinder, no part of the gun needs to be removed. One niggle concerns the angle of the inlet hole, which makes charging more awkward than it should be since the rifle needs to be supported in order to allow for the charging line to be fairly straight throughout the operation. Where this hole ends up seems to be down to sheer luck at the manufacturing stage, and a problem not confined to FX. Whilst I’m whinging, surely some form of protection/ plug is warranted around that inlet valve too, and not too much to expect, from a gun in this price bracket!

On the plus side, with my eyesight slowly deteriorating, I’m pleased to confirm that the integral pressure gauge on the underside of the stock is very clearly marked up; unlike many, including both my Air Arms rifles, which persist with tiny writing! Okay, maybe I need reading glasses!

As mentioned, the moulded cheekpiece sets quite a high sight-line. In addition, the height of the FX magazine cassette needs to be taken into account. In practise, I found I needed high mounts so that the scope sat high enough to clear the magazine body. With these in place, the sightline fell into place too, but it’s something to be kept in mind.

Set to the right of the block is the side lever, used to cock the hammer and cycle the magazine, and it’s a wonderfully refined set-up. Filling the revised 12 shot magazine (replacing the old 8-shot in .22 calibre) is still a little bizarre, requiring the first shot to be loaded ‘skirt first’ from the back. For the record, magazines are 16 shots in .177 calibre, and 10 in .25. There’s still a tendency for the drum itself to develop slight resistance too, between the mag lid and the body whilst filling. However, accepting these foibles, in operation the FX’s magazine cycling is among the best out there, with faultless operation from that perfectly weighted side- lever over many rounds, on test.

This model comes fitted with a full match trigger unit, and a flat surfaced, adjustable shoe, combined with a super light release, which is just the step up any hunting machine needs to maximize performance.

Another handy feature comes with the power adjuster (that small knurled wheel just to the left of the breech block). Just twist it to one of three marked settings, and energy can be altered at a stroke. Rough guides for each power level are 9ft/lbs/10ft/lbs/ 11.5ft/lbs, although this varies in my experience, from one example to another. Having the option to just turn down the power, can be a great asset in more confined spaces and, of course, shot count will rise accordingly! A great feature then, so hats off to FX for their design flair and vision.

On the range, the muted muzzle report, courtesy of that monster shroud, was really noticeable… or not if you get my drift. Accuracy-wise this gun posted extremely consistent results with over 600 shots within 20fps, amazingly with no official regulator fitted. Fairly phenomenal, but, of course, overkill to many. FX offer a regulator as an optional extra would you believe, so performance, in theory, can be pushed even further.

Half inch groups c-t-c were the norm from the Smoothtwist barrel, using Daystate Rangemaster Li pellets over 35 yards, whilst JSB/ Air Arms Diabolo Fields came in just over that.

£1200 is a significantly outlay in anyone’s book, yet with highly creditable performance all round, distinctive looks (which might divide opinions) and that huge shot count, this Gladiator MKII will find many fans looking for a hunting machine brimming with character. FX do things their way for sure, and long may it continue.