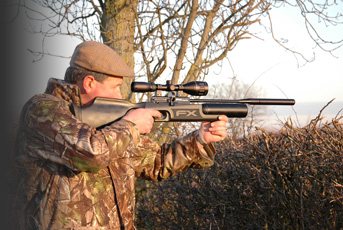 FX Airguns of Sweden, have firmly established themselves in the UK market, and now offer a variety of pre-charged pneumatics to suit most tastes and budgets. Whilst some airgun brands these days suffer from being a little vague and format driven, FX are quite distinctive, having built a reputation for innovation and radical design.

One rifle that has caught my eye for some time now is the new FX Royale 400. This is the company’s new flagship model, and is certainly crammed with features. With a sizeable ‘buddy bottle’, large integral silencer, floating barrel, rotary magazine, and side-lever cocking action, it sounds good on paper at least.

Deben are FX’s UK distributors, and having glanced at the technical details in their brochure, I was keen to see just how the rifle handled in the flesh, so to speak.

Black is Back – Well Actually It’s Never Been Away!

With regards to the furniture, two versions of the Royale 400 exist, the standard fitted with a black synthetic stock, and a walnut stocked version available for an extra £149 outlay.

My test rifle was submitted in ‘Tactical’ dress, and if you don’t much care for black synthetic compound stocks, look away now! FX just love ‘em, and with every one of their model range available in synthetics, it’s fair to say they have invested significantly in this area. They do it rather well though, and if futuristic mouldings appeal, then the FX range is a good place to start. The synthetics have a nice feel to them, and help to keep the weight down to a highly manageable 6.38 lbs unscoped.

For some reason the rifle seemed much smaller than I had anticipated, but I reckon the walnut model could well have the opposite effect. Rather like cars, colour does alter your perception.

Whether you opt for walnut or synthetic, the Royale’s actual stock configuration is near identical, and for that, read extremely comfortable. In fact, I reckon this has to be the best stock shape currently available from FX. I suppose it should be too, given that the Royale is, as previously stated, the flagship model, and retails for £799. Take the walnut stock upgrade, and you’re looking at very little change from £950, which is a significant outlay indeed.

The thumbhole grip configuration has a right hand bias, with the excellent contours including a full-blown thumb shelf (in the thumb-through position). The striking, flowing lines of the defined cheek-piece add real style to this rifle, although, in my book, the looks of its walnut clad stablemate will always win in the beauty stakes. On a practical level though, it’s hard to knock synthetics; impervious to Mother Nature, (warp free) and less of an emotional trauma when scratches inevitably appear! An adjustable rubber butt pad is fitted to the Royale, and this is always a welcome feature, bringing semi-custom fit at a stroke.

The ‘400’ in the name relates to the capacity of the buddy bottle air reservoir, and with 400cc of air onboard, it’s good for a massive 350 shots in .22 calibre, and still a hefty 280 in .177, this is one rifle for the lazy shots out there, who simply find the whole task of charging a PCP somewhat tedious. Connect up the snap-fit valve adaptor from the chosen air supply (be it pump or divers bottle), open the valve to the tune of 200bar, and then sit back and relax; content and smug in the knowledge that this machine will not run out of juice anytime soon.

Whilst the bayonet (Daystate style) air valve design is superbly safe and slick in operation, some form of protection must make sense, against grit, dirt and any foreign bodies, intent on attacking the integrity of the air seal…..protection which was missing on my specimen, and would surely cost FX just pence in the form of a small rubber cap.

Sitting alongside the valve on the underside of the forend, is an integral pressure gauge, which as always, should be treated as a reassuring but nonetheless rough guide only - with the gauge on the charging gear the primary confirmation. However, having an indication of residual pressures, and therefore the number of potential shots left, can be a real asset, especially for the more absent minded among us. Did I or didn’t I charge the rifle earlier?’ type scenarios, can be solved at a glance, with peace of mind every time.

Whilst the buddy bottle is removable (and many rifles require the removal to allow the vessel to be charged), with the accessible separate valve a feature of this rifle, it obviously makes sense to leave this buddy in place permanently, which is more convenient all round.

Less convenient is the old problem of having to grip cold steel as part of the fore-end, when the shot dictates. To be fair, the leading hand does have the lower shelf of the fore-end to hold for some shots, but the trend for frugal cut-away fore-ends on this style of rifle, is curious to say the least. I am quite large framed, admittedly, with the arms of an orang-utang, and smaller framed shooters may not suffer such indignities. Increase the length of that forend by a few inches, however, and no such potential problem exists.

FX triggers are normally quite acceptable, and this 2-stage design was one of the crispest I’ve shot from this stable, being both pleasingly light and predictable. Smooth off the angular edges on the blade itself, and it would be hard to criticize this unit at all.

This Royale incorporates the FX design of enclosed rotary magazine (12 shot in my test .22 calibre, and 16 in .177), and whilst it works fine once in place, I do find their approach a little irritating. Firstly, in a bid to differentiate the FX design from rivals (notably Theoben), the bizarre loading ritual still stands, as follows: wind the clear magazine cover anti-clockwise until it stops. Then, still holding the cover against spring pressure, turn the mag over and load a pellet skirt-first into the one visible chamber. Flip the mag over again, and load chambers in sequence. The magazine is now ready.

I had this Royale sent through when FX were seemingly revising their magazines, and after some confusion, new metal cased magazines were sent through from Deben, which would fit my particular specimen. Assuming FX settle on the spec, these new metal versions should prove much more durable than the older plastic designs.

Failing to mention the exquisite side-lever fitted to this model, until this late stage of the review, is somewhat remiss. A small flick of the hand, and the perfectly shaped lever is nudged rearwards to cock the action and cycle the magazine, indexing the next shot, then gently pushed forward and returned to its closed position. We are talking minimal effort expenditure here, and a prevailing air of refinement, befitting this flagship model.

A further point of note concerns the breech block on the Royale, which is treated to an altogether more lustrous, deep blueing, which really does set it apart from their other models.

So how does the Royale shape up? Well initial accuracy testing over 30yds had me scratching my head, as groups of ¾” ctc from a rested PCP were hardly overly impressive. Switching from FX pellets (JSB derivative) to Crosman Premier however saw a dramatic improvement, halving the group sizes at a stroke. Other examples may well favour different ammunition, as barrels so often do, so homework is the key here.

Positional shots with the Royale are a pleasure, given the sound ergonomics of the stock design. Standing shots are given the support they need from that deep box section, just forward of the trigger, whilst the comfortable thumb-hole grip adds confidence through control. Couple this with fine balance, and we have the makings of a superior hunting machine. Up front the large integral silencer does a great job of taming the muzzle crack on the Royale, but appears to be bonded to the barrel, rather than easily removable.

Chronograph readings over a monitored 100 shots, using the favoured Crosman Premier pellets, returned a variation of 25fps, which considering these were taken straight from the box, was fair. FX pellets posted slightly better consistency, but I’d opt for the more accurate choice every time.

In short, the FX Royale 400 is a very pleasant rifle to use. An impressive list of features combine well to create a striking product that handles and shoots as good as it looks. It does cost serious notes though, so get along to your local dealer and handle the merchandise alongside the competition to make that final decision.