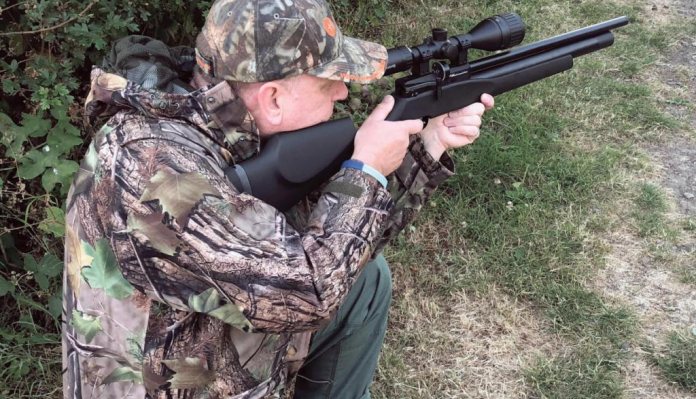 I’ve long been a fan of FX Airguns of Sweden and their innovative inventor Fredrik Axelsson; he has come up some amazing air rifles over the years and the range is now vast. I fondly remember testing various FX products, such as the Cutlass, Cyclone, Gladiator and my all-time favourite, the original Verminator. Back in those days, a Verminator was about £650 and I really regret not buying one to this day. I did however buy an FX Ranchero pistol, which is still one of my best loved pistols with its elegant, ergonomic walnut grip.

I was also on-hand to see how the barrels that FX now use were developed and made, when I was at airgun boffin Ben Taylor’s premises; his Smooth Twist barrel making process is used on all FX airguns now. The barrel is a highly polished, smoothbore tube, with the muzzle end swaged from the outside in a special set of dies that deform the steel to make a series of shallow, angled ridges inside the end of the tube. This process allows the pellet to speed up the barrel, with less friction than with a conventional barrel but is given a quick twist just before it leaves the muzzle. This is enough to impart stabilising spin, which is needed for accuracy, but the pellet is not engraved with deep grooves, so travels through the air better than a pellet fired from an air rifle with ‘normal’ rifling. Originally, just the last few inches were ‘rifled’ but Fredrik has developed it further into its current form, ‘Smooth Twist X’, where the process is applied to the barrel’s entire length. These new barrels are simply superb and win most of the silverware at the annual Extreme Benchrest Competition in the US each year. Suffice to say, accuracy was spot on with the subject of this review, a synthetic stocked Streamline.

The Streamline is a conventional barrel over cylinder pre-charged pneumatic; I say this, as FX do love a buddy bottle! They feature on all sorts of FX rifles and are usually mounted in front of the action but often make an appearance as the butt of the rifle as well. Nothing so unconventional here though, just a tried and tested layout.

The black anodised alloy breechblock is prevented from being too ‘blocky’ by some stylish contouring to the front and also at the rear of the loading port and there are 11mm wide scope mounting grooves along the top. A blued steel sidelever is fitted to the right-hand side and pivots at the rear. The main shaft is 2½-inches long, so there’s plenty of leverage for a smooth cocking stoke and the drop down, tubular gripping section is comfortable to use. As the sidelever is pulled back, the pellet probe is withdrawn from the breech and when the lever is fully to the rear, the trigger sears engage and hold the internal hammer. Pellet feed is via the standard FX magazine that has a clear front, so that you can see the payload on board; in .177 the magazine holds 13 pellets, with 11 in .22 and 10 in .25. Loading the mag is easy once you’ve done it a couple of times, but you do have to load the first pellet into the rear, skirt first, but I won’t bore you with it just now. Read the instructions and it’s a doddle!

A discreet safety catch sits just below the rear pivot and the tiny knurled button is pushed forward for FIRE and pushed back for SAFE and these very words are printed onto the black finish, so that there’s no ambiguity. Handily, the safety can only be engaged when the action is cocked, so it’s a very good indication of the action’s status. The two-stage ‘Match grade’ trigger is actually quite a sophisticated unit (I’ve always liked FX triggers) and the alloy finger pad can be adjusted to suit individual tastes by loosening a tiny grubscrew and tightening it again once the blade is positioned perfectly. The position and let off were just right from the factory, so I left it alone.

Power up, power down

Should you wish, you can alter the power of the Streamline, which is something that a lot of FX models share. I’ve never really used this facility a great deal personally, but I can see it being useful when carrying out a feral pigeon clearance job at short range, where a pellet could easily damage roofing panels etc. It doesn’t take a massive amount of power to humanly kill a feral, so a lower power setting can be perfect. Power is adjusted via a rotary control on the left of the action and there are dots machined into it to indicate the approximate power level. Three dots (full power) is around 11ft/lb, two is 7-8 and one is about 4-5.

One thing that you can’t see, is the internal regulator. This meters the air in a consistent way, thereby stopping power fluctuating as the air pressure in the 34mm diameter, alloy reservoir lessens. A pressure gauge is fitted to the end but I’d prefer it under the stock personally. More consistency equals improved accuracy downrange, so it’s no surprise that FX airguns do so well in competition. The free-floating barrel has a baffled, alloy shroud, 20mm in diameter that keeps things civilised on discharge but if you want things ultra-quiet, the front is threaded ½-inch UNF for an add-on moderator of your choice, as for some strange reason FX do not make one! There are obviously loads available that will fit and from experience, the Huggett Belita works very well.

The only thing I’m not too keen on is the ‘brushed’ effect on the air reservoir and barrel shroud. I can see that this is cheaper than polishing to a mirror finish before they are anodised but I think it detracts from the overall impression of excellent quality. I think a matte, bead-blasted finish would look better but what do I know, I don’t own one of the largest airgun companies in the world…

One feature I absolutely love, is the Streamline’s, soft-touch synthetic stock! It really is an example of elegant simplicity and its graceful lines flow beautifully from the forend to the height-adjustable buttpad.

The rounded forend has an angled tip and the curves make way to flat sides below the breech. I usually prefer more upright grips but this one is actually perfect, although saying that, there’s no thumbgroove but you can’t have it all! However, we can have it all as far as the butt is concerned, as there are mirror image cheekpieces, making it okay for lefties. It’s possible to raise or lower the rubber buttpad, so thumbs up all round.

Down on the farms

I took the Streamline to Pete’s Airgun Farm in Essex for several, quite lengthy sessions, both indoors and outdoors and I was impressed as soon as I started shooting. I’d mounted a Hawke Vantage 4-16X50AO in Sportsmatch mounts and accuracy was as expected – excellent! I used H&N Field Target Trophies, RWS Superdomes, Air Arms Field and FX’s own brand and the Streamline loved them all. I constantly worked my way back and forth along the wall, shooting the spinners at fiveyard intervals until the point of aim using the Mil-Dot reticle became second nature, made easier by the flat shooting .177 pellets. These rifles have proven to be so accurate that Sure Shot Airguns now sell a variant in an adjustable FT stock.

I also spent quite a while shooting my ‘Totem Pole’ target that is basically a wooded stake with Target Air spinners screwed to it. It’s great fun working your way up and down the post and I was really enjoying myself. The stock provides perfect scope/ eye alignment and it’s a joy to handle. The rubber coating ensures a secure grip and it looks great too. I did add an extra silencer on some visits but it’s not exactly loud with just the bare shrouded barrel, so tended to use it ‘bare-back’. Shot count was over 140 but I generally just filled up using the probe after a dozen or so magazine loads had been used. Consistency was boringly good, thanks to the regulator.

When it came to actual quarry shooting on my local farm, I’ve been trying to test a lamping kit on another rifle at night and had no luck what so ever when targeting rats, there weren’t any! I didn’t fare much better with the Streamline during the day, as quarry must be able to find more food away from the farmyard at this time of year. On one similarly fruitless evening and after a quick zero check, I was staking out the bird feeders, waiting in vain for a feral pigeon to start pecking around underneath, when a rat wandered out from the weeds. It wasn’t exactly a tricky shot at a range of seven-yards but down it went, dead as a dodo. I left it for a while, hoping that a magpie or crow might spot it but no such luck! So, up until now, the only thing other than targets that this lovely rifle has taken care of is a single rat but wish me luck for the future!

Well, what a lovely, elegant air rifle and it’s been a pleasure spending time with it. It handles like a dream and the cocking and loading system are faultless and it’s amazingly accurate; well done, Fredrik, yet again!