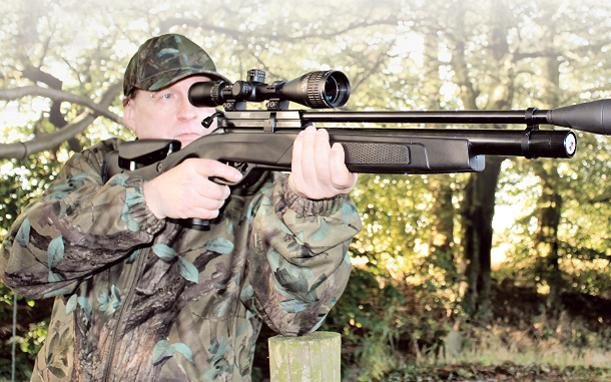 It’d be true to say that Spanish airgun manufacturing giants, Gamo, got it right with the very first roll of the dice when they launched their first production multishot PCP, the intriguingly named Coyote. Due in part to it having many features that were reminiscent of time-tested units/mechanisms that we’re familiar with, it’s no surprise that it quickly became a popular option. In fact, when I tested the original Coyote, I stated that I felt it ‘to be one of the best value for money multi-shot PCPs currently available.’ Now I get chance to test the Camo Coyote Tactical, based on the original but dressed in a very stylish, yet practical, black synthetic stock; it also comes ready fitted with the company’s own design silencer – interested? Then read on…

Anyone familiar with Gamo rifles will know that they’re no newbies when it comes to the design and the manufacture of synthetic stocks. In my opinion, Gamo were arguably one, if not the, first European airgun manufacturer who purposely concentrated their efforts in honing this process to the standard we now expect, and as a result of their efforts, many, many other manufacturers have followed suit. This has resulted in the stock material now not only becoming very wellestablished and accepted by the shooting public, but also many popular brands and models of airguns are now available in a synthetic stock alternative to their wood stock relatives.

With that said, the original Gamo Coyote (still available of course) was launched wearing a practical and quite stylish sporter beech livery. In that respect, the synthetic (Tactical) variant here on test couldn’t be more different, as it boasts features that many airgun hunters such as myself gravitate towards, due to the better inherent handling characteristics. I’ll also point out those who have followed Gamo’s progression in the quality of air rifles offered will certainly notice the stock bears many features found on stocks that have and do adorn certain spring powered models in their range. The fully ambidextrous, synthetic butt section in particular strikes an uncanny resemblance to many other rifles the company produces, and has a familiar triangular design, elongated thumbhole behind a steep drop down pistol grip. This is perfectly complemented for hold and scope/eye-alignment, due to it featuring a height-adjustable cheekpiece. The rear has a unique black rubber buttpad. I say unique, as it features three removable ‘friction fit’ rubber blocks that pass straight through the buttpad itself. The purpose of the design is that one or all can be removed to suit the shooter’s preference. This is a design seen on certain shotguns, obviously so you can opt for the more forgiving feel of a heavily ventilated buttpad to help combat recoil.

The forend is relatively lengthy, quite slim, has a rounded underside and the moulding is contoured, so it swells out towards the middle section, offering more material for your leading hand to hold. Also, it’s fitted with raised rubber grip panels which contain a practical configuration of raised oval dots. These are positioned either side of the forend and pistol grip and in use really do prove their worth.

When it comes to the action, obviously the Tactical version utilises the same as the original wood stocked version – albeit slightly modified to be inkeeping with the stock design, but more so in practicality due to this version having an integral and very efficient moderator already fitted – but much more on the latter soon.

The well-sized air gauge or ‘manometer’ still sits on the very front of the air reservoir, while the fill point remains safely behind a black plastic friction fit front collar/sleeve that protects it from dirt and grime. Once slipped fully forward (off), you can then connect to your charging gear using the safety damped QF probe (supplied) to fill to the manufacturer’s recommended 232 bar. This gives approximately 70 fullpower shots in .177 (as per rifle on test) and 100 in .22 calibre. Incidentally, a cosmetic modification is seen at the rear of the air reservoir, as it has a rounded plastic end cap that neatly finishes the exposed part of the reservoir as it curves down to the stock, shrouding the original’s ‘blunt’ end face.

As I mentioned in my previous test of the original model, the Coyote uses a version of BSA’s tried and tested 10 shot removable selfactuating magazine. To recap, the magazines that Gamo use also now have a colour-coded, high-impact polymer inner rotor. The colour denoting the different calibres – these being blue .177, red .22. Also, at the top on the exposed area of the ridged outer edge of the rotor the chambers are numbered so that you can keep check of your firepower status. Interestingly, and as I also noted in my test of BSA’s R-10 M2 Standard, there’s a new addition to the design. This being a small circular aperture towards the bottom left of the magazine faceplate that shows a white dot when you’ve come to your last shot.

However, unlike the BSA design, it doesn’t use a retaining catch to hold it in the housing; rather the magazine is held in situ by a very strong magnet. These are revealed and clearly seen at the sides of the ‘loading well’ – here two slightly protruding metal side plates help guide and ‘hold’ the magazine very securely in the left of the action block. The cocking bolt has a fingerfriendly, flat-ended, teardrop handle, which feels good in the hold and operates very positively. Draw it back to cock the rifle and push forward to probe a pellet out of one of the 10-chambers of the modified magazine.

Again, a feature worth credit is the SAT2 trigger mechanism. This 2-stage adjustable unit features an in-guard manual safety blade, set forward of the rather nifty looking trigger blade. It cleanly releases shots without a hint of creep and while the nicely styled trigger blade offers a comfortable finger feel, the safety blade is of such a size and so positioned that it’s easily operated by the trigger finger.

The stock’s integral safety guard is now of a much more rounded design, helping give the rifle a look of hardware that’s built to help far more than hinder any operation at this area. Although the rifle boldly bears the words ‘Made in the E.U.’ on the action block, I’m now pretty certain that the 18.5 inch long Hammer Forged Barrel that’s supported by a wholesome looking barrel band, could well be the same tube fitted to many a BSA branded air rifle.

Now to that efficient and familiarlooking integral silencer that is fitted to the Coyote Tactical I mentioned earlier. I say ‘familiar’ as Gamo have previously used a very similar-looking can on many models of mechanical action air rifles – most often models with the word ‘Whisper’ as part of, or as the rifle model’s full name. Gamo state the silencer utilises their own patented ‘Whisper Technology’, which uses virtually every feature a silencer can to dissipate air, to help tame muzzle report on discharge. Internally, the silencer holds a set of baffles and spacers, that are wrapped in sound deadening felt with a thin, red plastic sleeve holding all it in place – it’s this that can be seen through the three oval apertures set either side towards the end of the silencer. Also on the outer edge of the removable end cap are six vent holes that help slow and dissipate air that immediately follows a pellet as it exits the rifle. All this combines superbly well in taming report and I can see no hunter having an issue with the unit, as is the case with many integral silencers fitted to certain other air rifles.

Upon testing this ‘Whisper’ quiet multi-shot PCP with a Hawke Airmax EV 4 -12x40AO in medium mounts on the deep-cut scope rails of the uninterrupted action block, the .177 test rifle proved to be highly accurate. Setting a sensible 30 yard zero for the small calibre I had on test, shooting rested I was soon producing ¼ inch groups using any quality ammo at this range.

In my test of the original version of the Gamo Coyote I was mightily impressed at the performance it showed in all departments, not forgetting the fact it has such a pocket-friendly price tag. I say this as the Gamo Coyote Tactical is ‘price matched’ but offers so much more by way of performance. They could have easily just given us a standard and practical synthetic sporter stock, but have gone the extra by adding features any discerning shooter appreciates on such a rifle. Also, to add the highly efficient ‘Whisper ‘Technology’ can up-front and include it in the price has to be the icing on the cake.

To sum up, I’ve no hesitation in saying the Gamo Coyote Tactical is an ideal choice for any airgun hunter looking for an all-weather, general purpose, very accurate, fast handling, lightweight, ultra-quiet, multishot PCP – and definitely one that won’t break the bank.

Thanks to T & J. J McAvoy LTD for supplying rifle on test.