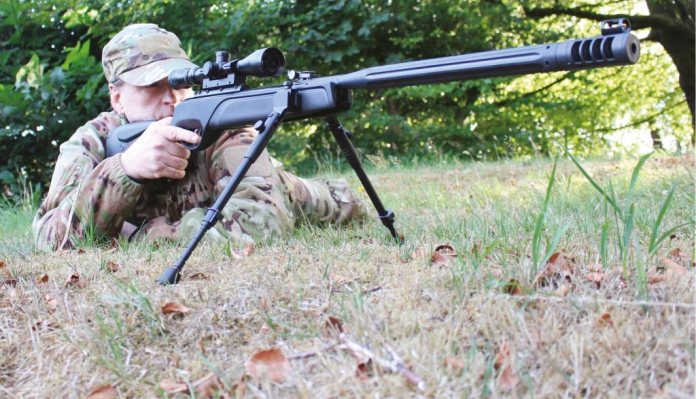 Like other recent launches, the HPA comes as a combo; in this, case bundled with a Gamo 3-9 x 40WA scope, one-piece mount and a dual-mount bipod. More on these add-ons later but first, Gamo have concentrated more on manufacturing air rifles that use in-house designed and, in some cases, innovative synthetic stocks, that aid shootability and able to withstand all that the elements can throw at it!

The ambidextrous stock of the HPA is an interesting design. The butt section features a height-adjustable cheekpiece and is fitted with Gamo’s SWA (Shock Wave Absorbing) black rubber butt pad. This has three, removable, rectangular inserts that can be slid out, so allowing you to tailor its shock absorbing properties. In comparison to the butt, the neck is slim and gives way to a steep, drop-down pistol grip with a generous palm swell with fine stippling on either side. The lengthy forend is slim with a rounded underside, this too shows more stippling panels.

Near the front of the forend, a Picatinny base sits on either side, which is for the fitting of the bipod system, which is just a little different. Surprisingly, for a rifle like this, it has a set of Hi-Viz open sights; the hooded front is a raised red fibre optic bar, while the notch of the fully-adjustable rear has green inserts to help with line up and target acquisition. The lengthy barrel positions them further apart than other designs and therefore gives a longer sightline, which increase accuracy potential. However, ranges with these should be kept to a sensible 12-15 yards.

However, most will ignore this feature and go with the optic supplied. This general-purpose scope is Gamo-branded, which is what I’d term reasonable quality, but for the money the combo is priced at, you shouldn’t expect more. For mounting, we come to another familiar and praiseworthy feature – the RRR (Recoil Reducing Scope Rail), which stops the recoil produced being transferred to the scope. It’s a two-piece aluminum build, which is separated by dual polymer struts to absorb the shock.

Unlike a conventional design, the bipod consists of two separate, detachable and adjustable folding legs with rubber boots; when not in use, they fold forward. Fitting is a simple procedure, because at the top of each is a Picatinny mount unit that mates up with the rail on the forend and secures in place like any other accessory, using a screw locking clamp and locating bar.

Legs are height-adjustable, effectively elevating the underside of the rifle from 8”-10” off the ground. Granted, not that much in variation but in use they proved well-suited for adopting the prone shooting position. Having an attachment point on either side is the only way you can fit a ‘pod’ to a break-barrel rifle, without interrupting the cocking stroke. More importantly, further into the test, I became aware of a very useful trait this arrangement displays. Not only do they offer a stable platform to shoot from, but as they don’t share a common base, they offer a level of ‘flex’ that helps cushion transference of movement to your aim during the firing cycle.

Gamo fit their SAT2 2-stage, adjustable trigger unit, it’s also been upgraded and carries the designation - CAT standing for Custom Action Trigger and is one I’ve used before when I tested their Maxxim Tactical multi-shot, which is one for the few, magazine-fed break-barrel rifles and surprisingly good. Briefly, it means that the trigger’s 1st and 2nd stages of operation can be independently adjusted. So, you can set-up the length of travel for both stages, including altering the pull weight for the 2nd stage independently.

Again, the layout of the trigger and safety is a familiar one, that being the alloy trigger blade is broad and nicely curved, while the much smaller manual safety lever sits in front of the main blade inside the integral trigger guard. The unit lives up to expectations and gives a crisp, clean and predictable shot release, plus safety operation is easy and instinctive.

The Whisper Maxxim Dual Sound Suppression unit does admirably well for reducing muzzle report. This synthetic unit fully encases the barrel and extends forward of the muzzle. Recesses of cosmetic fluting run almost its entire length before ending just prior to the large-calibre style vented muzzle brake, on top of which sits the hooded foresight assembly. I’m pleased to report that the cocking stroke is very smooth and the lengthy barrel and silencer assembly help with leverage, so it’s not an overly strenuous task to cock it. When in the open position, a large wedge shape detent lock and chunky breech seal are plain to see and install confidence that the rifle will have a solid lock up and all is airtight at the breech when loaded and returned to the closed position.

So, with the combo fully rigged and
zeroed for 25yds, I began by shooting the rifle freehand and producing sub 3/8” groups. Then, shooting off the bipod, I achieved ragged ¼” groups which prove the IGT system produces little recoil and far less vibration than a conventional ‘old school’ springer.

To finish, I again refer to the company description of this rifle, which is as follows: “This outstanding rifle has arrived to set a new standard in the tactical airguns market.” In some ways, it’s hard to disagree with that statement, as the Gamo HPA Mi is a very accurate, low recoiling, user-friendly mechanical action air rifle that’s got the looks to match its performance.