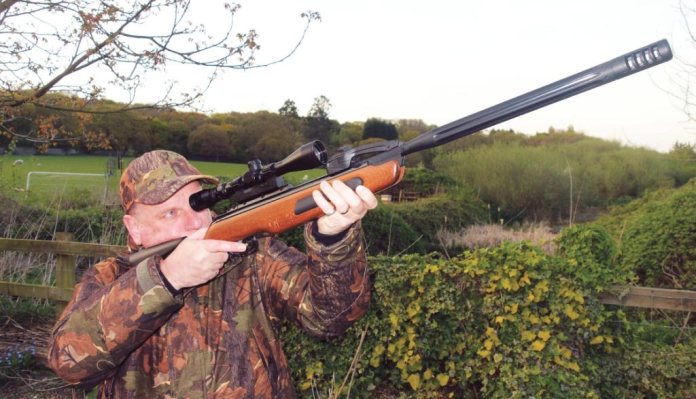 I’ve recently been spending quite some time with a cracking air rifle, one that I think will sell in huge numbers! The specification sees a break barrel rifle with a gas ram in place of a conventional coil spring, an in-built sound moderator, a recoil reducing scope rail, a shock-absorbing recoil pad and a beech stock with an adjustable polymer cheekpiece. Add in a 3-9 x 40 scope and mounts and you’ve got quite a package at the very good price of around £270. The fact that it’s also got a rotary 10-shot magazine is surely the icing on the cake!

There have been repeating break barrel and underlever air rifles in the past of course, Gamo themselves made various break barrel models with an in-line magazine on top of the action; BSA also had the stylish, yet expensive, Gold Star repeating underlever. Reliability wasn’t always what it should have been, especially with the more affordable break barrel guns and these models were reasonably successful but things move on and pre-charged pneumatic (PCP) air rifles became more affordable and multi-shot actions soon became the norm. Most PCPs use removable, rotary magazines and BSA and their sister company Gamo both use similar mags in their rifles. I got to see the Maxxim Elite in the flesh at the recent IWA trade show in Germany and I must admit that I couldn’t stop grinning as I held it! The action is so simple, yet pure genius!

The Maxxim Elite uses a rotary magazine that is quite similar to those used on BSA and Gamo PCPs and has a 10-shot pellet carrier within a polymer casing. The inner wheel is sprungloaded and has to be turned against the spring pressure each time a pellet is dropped into a waiting chamber. It is the pellet itself that stops the rotor turning and as each pellet is used, it rotates to offer a fresh round.

A black synthetic housing is fitted to the top of the breechblock and houses the magazine; the mag housing is attached at the front but is free to move during the cocking and loading procedure. The magazine is held in place by wire springs either side of the unit and mags are simply pushed into place, where they’re held securely but to remove them, a button at the rear of the unit is pressed down, which releases the tension on the wires, allowing the magazine to be removed. When the barrel is drawn down to cock the rifle, the rear of the unit is forced down and an internal probe pushes a pellet out of the magazine and into the breech. Once the rifle is cocked and the barrel is returned to the locked position, the probe is withdrawn from the magazine, which allows it to rotate again, thereby offering a full chamber for the next shot.

The loading takes place without any fuss or drama and if you can visualise the pellet probe connected to a pre-charged pneumatic moving back and forth, that’s pretty much what’s going on inside the housing. The red coloured rotor is marked around the circumference with numbers 1-10, so you can easily keep an eye on how many pellets you have left at your disposal and after the last pellet has been fired, a warning symbol appears through the window in the top of the magazine body and a white spot is revealed on the rear, so there are two visual warnings that the mag should be either refilled or another one substituted. Gamo are very thoughtful here, as two magazines are supplied!

Being a gas ram rifle, or IGT, as Gamo call it, standing for Inert Gas Technology, the cocking action is very smooth indeed, so no complaints from me! Being able to cock and fire a break barrel air rifle without having to load each pellet individually is a real godsend and the Maxxim Elite is a perfect hunting rifle for times when you want to keep an eye on our quarry, without having to fumble for a pellet and load it into the barrel. As a ratting gun, I think it’s really got it covered. It’s obviously not as quick as cycling the bolt on a PCP but not everyone wants, or can afford, a pre-charged rifle and charging gear.

Another plus point is the beech stock! The attractively styled sporter stock features a chequered grip, has black synthetic gripping panels inset along the forend, a rubber buttpad and an adjustable cheekpiece. The height needs to be quite high, as the rifle has a raised, impact absorbing rail fitted to the dovetails on top of the air chamber. This ‘Recoil Reducing Rail’ (RRR) not only helps protect the scope from damage but it also raises the optic high enough so that it does not obstruct the view through the scope. From the photographs, it might look like the magazine housing would be blocking the view but it doesn’t at all. The system works well and it’s great to see an adjustable cheekpiece on such an affordable rifle, as it allows proper scope/ eye alignment to be achieve with the twist of an Allen key.

Other key features of note are:

The fully shrouded barrel that uses a rifled steel barrel within a synthetic sleeve. The unit is called Whisper Maxxim Sound Suppression technology and incorporates flutes along the exterior and a ‘muzzle brake’ on the front.

The Custom Action trigger (CAT) is a pretty good trigger and there are no doubts as to when the gun will fire and the safety catch can be set or not as required. I’m not actually a fan of safety catches anywhere near a trigger, as it just seems strange placing a finger near something that you want to disable. That’s just a personal quibble however.

A free scope and mounts! The optic that comes with the Maxxim Elite has a magnification range from 3 power to 9 power and has a 40mm objective lens. Inside the one-inch body tube is a traditional 30/30 reticle and it’s fog, shock and waterproof. The one-piece mounts clamp the scope to the rifle securely and I think that they’re far superior to single piece mounts on a recoiling rifle such as this.

All the above add up to quite a package but what’s it like to shoot? Well, it shoots very well and even though I’ve only put half a tin of pellets through it so far, that super clever auto load system is absolutely spot-on, each and every time. Accuracy is good as well and when quality pellets are used, it’ll produce tidy groups at usual hunting ranges. The only thing I’m not too keen on is that the length of pull, at 15-inches from buttpad to trigger, it’s quite long.

I’ve been very impressed with the way that it’s possible to shoot on almost ‘auto-pilot’, without having to load each pellet individually and that spare magazine is a very good idea, as I’ve always got 20 rounds instantly available at any given time. This may only be a brief look but I am confident that the Gamo factory will be working flat out to keep up with the demand for this innovative air rifle!