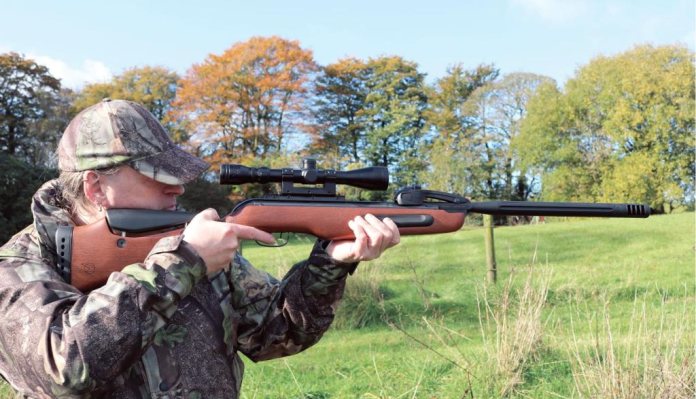 In contrast to the massive selection of PCP multi-shot air rifles, you can easily count on one hand the number of multi-shot mechanical action air rifles on the market.

So, when such a rifle is released it undoubtedly creates a stir in the scene but also, of course, public interest.

Some would say the lack of models to choose from is due to their unpopularity. Well think again as here is a rifle that when first launched single-handedly renewed interest in the genre and one that also has become one of the Company’s most popular selling air rifles – that being the Gamo Maxxim Elite.

My first experience of the rifle came when I tested the tactical synthetic stock version, a rifle with the same action but one that was dressed in entirely different livery.

However, the original Maxxim Elite’s popularity is still at an alltime high and I must add there are no indications it is going to wane, so I thought it high-time I took it for a test drive. Reason being the Maxxim deserves to be recognised as a landmark for the company and an air rifle that’s unquestionably unique.

The ambidextrous beech stock is an immediately appealing feature due to its ergonomic nature and, of course, its nifty design traits. First of note is the height adjustable cheekpiece which is manufactured from a black synthetic material with a textured finish. This is raised or lowered by two recessed hex bolts on the right-hand side of the stock.

The butt is finished with a black ventilate rubber butt-pad which is a solid piece when you consider the forgiving nature of the SWA (Shock Wave Absorbing) rubber buttpad that adorns the tactical version of the rifle.

The neck and pistol grip are relatively slim while the latter is set at an angle that enables it to be a comfortable platform for operating the trigger, it also has a generously sized chequered panel on either side. In contrast, the forend, like the rifle itself, is quite lengthy so ideally suits the action it holds for balance and handling. It’s of a medium build and features two fluted black panels (palm grips) that are of a similar moulded material to the cheekpiece but also have an almost rubberised feel.

For scope fitting, Gamo have blessed the Maxxim with a ‘Recoil Reducing Scope Rail’ or RRR as it’s known. As the name implies this reduces recoil, specifically the stress of it that could be transferred to an optic if it had to be mounted in the cylinder’s dovetails. This rail absorbs the shockwaves created during the firing cycle due to it having a two-piece aluminium build separated by dual polymer struts.

Talking of optics, a Gamo 3 – 9 x 40 scope is supplied with a one-piece scope mount. When in situ on the rail, it sits quite high but that ensures the auto-loading mechanism doesn’t obscure your view.

Now we come to the autoload mechanism, which is a substantial feature as it sits above the action completely covering the breechblock – however this quite lengthy synthetic moulding is key to the operation of the rifle. The body of it begins at what is its pivot-point directly behind the barrel shroud and from there it arches up and reaches back over to cover the point the barrel meets and seals with the breech/barrel when closed.

Interestingly all this unit, including the 10-shot magazine when in its housing, ‘sits’ outside the main action when the rifle is in the closed position. How it manages to transform the gun into a multi-shot is quite ingenious and a clever piece of both design and manufacture.

First you need to remove, load-up and re-install the selfactuating cassette-type magazine. To do this, you first need to push down the retaining catch positioned on top and directly behind the magazine itself. Then grip the magazine on either side with your thumb and forefinger (the top sides are serrated for ease of grip) whereupon you can lift it up and out of the housing in the main unit.

With the magazine out of the action and facing you – you can clearly see the magazine consists of an ABS inner rotary drum housed inside a black ABS casing. This is both numbered and colour-coded for calibre – blue denotes .177 and red is .22.

For loading there’s a loading aperture positioned bottom centre, and to fill the chambers you turn the drum anti-clockwise against spring tension until it comes to a stop. Pellets can then be inserted through the aperture in casing as the empty chambers appear, which they do as you let the ‘drum’ return under your control until all are filled. The magazine can then be returned (pressed down) back into the top of the housing whereupon it clicks securely into place as you press downwards where it is held securely by two rods.

In use, the number of shots left is clearly indicated by the number you can see at the very top, plus a white dot appears in an aperture in the rearward face of the magazine to indicate the ammo store is used up. Also, the exclamation mark symbol (!) appears at the top indicating your running on empty

Breaking the barrel to cock the rifle activates the hands-free loading procedure, because it’s at this point the unit’s probe takes a pellet from the magazine and directly loads it into the barrel. You don’t see this happen as the magazine is obscured from view and is achieved as the barrel rises up into the auto-load mech’s synthetic body. If you look at the underside of the unit when the barrel is open you can see the wedge shape détente lock, but the barrel is now clearly out of sight as its been primed. On return the barrel locks up solidly at the breech and the auto-load mech returns to sit above the breech as before. Gamo’s term for this is 10x Quick-Shot Technology.

The SAT2 2-stage adjustable trigger unit has been upgraded and now also carries the term CAT standing for Custom Action Trigger. The modification allows you to independently adjust the 1st and 2nd stages of the unit’s operation. This means you can adjust the length of travel for the 1st stage and length of travel plus pull weight of the 2nd stage independently. The main alloy trigger blade is broad and nicely curved while the manual safety lever is much smaller and sits in-front of the main blade all protected by a metal trigger guard.

You can’t fail to notice the barrel shroud is quite long (as is the rifle), but the bonus is that it offers a good amount of leverage for cocking the gun, resulting in the operation being smooth and easy.

Returning the barrel without thumbing a pellet in does at first seem a bit strange but, sure enough, a pellet is loaded into the breech and on firing the rifle only nudges back in the shoulder – a nudge familiar to the gasram power source. Gamo term this IGT (Inert Gas Technology) a very fitting term when you consider how well the internals operate as effectively and efficiently as they do. And what is very noticeable is report is tamed to a very low thud due to the company’s Whisper Maxxim Integral Sound Moderator. This is an over-moulded synthetic sleeve that fully encases the barrel within which are silencing systems which entail a set of baffling units. Gamo aren’t letting on the full nature of the internal construction, as it’s a very effective one that they have every right to be proud and secretive of.

Externally there are stylish lateral flutes seen running along its entire length and at the tip there’s a vented muzzle break as seen on large calibre sniper rifles. However, it’s not for purely cosmetic reasons as the grooves of the vents aid your grip when cocking the rifle.

As for accuracy, with a 25-yard zero this is a rifle capable of kill-zone accuracy with groups on paper showing as ragged ½-inch holes.

Now the big question – have Gamo come up with a fully functioning field-ready mechanical action air rifle with a multi-shot facility. The answer is a resounding yes. However, although the autoload mechanism has been tested to breaking point I can understand some might feel this external unit could easily be at risk of getting a good few knocks while doing its duty.

In operation I can’t fault the Maxxim’s multi-shot capability, and since its launch enough models of this rifle have been sold to more than indicate it’s now a time-tested proven unit.

Now having experienced both versions of this rifle, I’ve no hesitation in saying this is my favoured model due to the much more appealing stock. The height adjust cheekpiece is of great benefit for attaining a perfect eye-scope alignment and the rubberised palm grips at the forend are ideally positioned for a rock-solid and secure hold. Also, I again congratulate Gamo for taking on the task of creating a multi-shot mechanical action air rifle and giving us one that works and works very well indeed.

So, if a multi-shot rifle that won’t run out of air appeals to you, I strongly advise you have a look at the Maxxim Elite as, no matter what stock option you chose, it’s a unique rifle that fills a very overlooked niche.