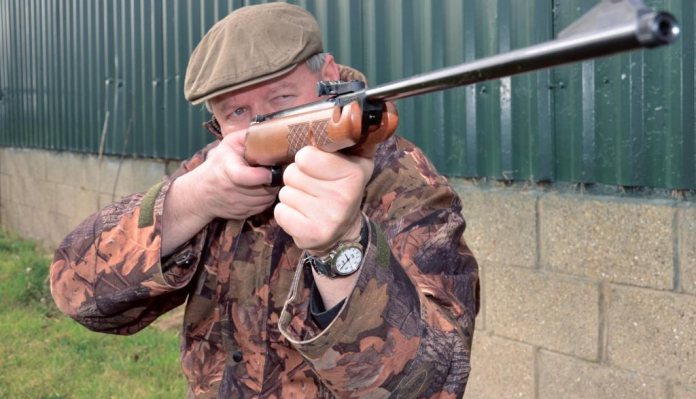 It’s been on the cards for some time that Gamo were set to produce Winchester-branded airguns under license, and if I remember correctly, it was two British Shooting Shows ago, when the prototypes were first on show. Well now, they’ve finally hit the market, and on test here are the two .177 models, the Model 45, and the Model 45RS.

Fancy a .22 version, and they are coded Mod 55 and Model 55RS. As for the test rifles, they are both mechanically identical as far as the power plant is concerned, and for that read conventional spring piston power. The Mod 45 comes with a full-length barrel fitted with fibre optic open sights, whilst the 45RS gets a trimmed down barrel and silencer. Time then for a tour of their respective features in detail

The Model 45 comes with a sleek varnished beech stock, ambidextrous in configuration, and those attractive panels of laser-cut chequering across the forend and pistol grip really look the part, but of course have a serious job to do, adding grip where it matters. Straight line stocks have a stylish air about them, but with no defined cheekpiece I was interested to see how they would feel on the range, more of which in a moment. This is only beech, but the light stain allows plenty of grain to show through, and with a rubber buttpad fitted, and the Winchester ‘W’ neatly applied to the tail end, it all comes together nicely.

This model gets that fulllength 18-inch barrel, and that extra few inches gives a little more weight overall. Fibre optic open sights make use of all available ambient light, and literally appear to glow. The coloured elements combine well, with two green dots forming the rear ‘notch’ and a vibrant red dot at the front. The final detail worth noting, is the muzzle, screw cut and capped off, ready for a ½-inch UNF silencer, so some built in versatility here too.

Moving to the 45RS, here we get a shortened barrel- down to 12.75-inches, and a neat super light factory silencer pre-fitted. It feels very sleek, but the addition of an ‘o’ ring at the contact point would make sense, as the silencer on my test gun just occasionally loosened as it doubled as the cocking aid. Nipped up in a second, but an avoidable irritation nonetheless. Weight overall still comes in .2lbs less than its stablemate, but balance is equally pleasing. Here, the action gets the usual Gamo raised scope rail, and whilst this may help when fitting oversized glassware, I found it set the sight line too high with the fairly low cheekpiece. These rails are removable, however, with the aid of a star headed socket set, and then the gun’s usual dovetail rails can be used underneath, lowering the scope height by around half-inch. I did this, and the scope instantly sat perfectly. Not a fault then, since the rail is an additional extra – just try it with the rail removed.

The 45RS’s stock is similar to the 45, but I really like that angular forend and top edge finger groove. Finish to all the metalwork on both models is difficult to fault, with a high standard of traditional chemical bluing, and even surfaces throughout.

First stop is the chrono, and I it was time to see how the respective actions compared, given that I effectively had two identical power plants to compare. Cocking both models was similar in effort required – full length barrel against silencer configuration, and for that read fairly easy, once the barrel had been jolted free. Cocking this mechanism is super smooth, and the final lock-up very slick. It has to be said that the 45 had some serious ‘dieseling’going on initially, as it burnt off some excess machine oil over the first 7 or 8 shots, but after the pyrotechnics had subsided, (and I’d explained away the cannon noises to my neighbour!) all was calm… and flipping consistent. 5fps total spread using Air Arms Diabolo Field 8.44 grain over a 10-shot string, against 8fps for the 45RS was a pretty impressive start, whilst energy levels came in bang on the money too, as far as current manufacturers settings are concerned – 11ft/lbs and 10.7ft/lbs respectively. Let the actions wear in, as with any springer, and you may well see an increase in efficiency, and in turn fps readings down the line.

Gamo fit an anti-bear trap device to this action, and that means that whilst the safety catch is manual and can therefore be ignored if required, the system cannot be de-cocked. As mentioned, the cocking action and lockup is pleasingly refined. As for the firing cycle, the internals are classic Gamo, in that they are just a little aggressive. A quick snap, but a bit harsh. As for the trigger, (identical on both models) it’s a pseudo two stage, but the ultra-light first stage and wide blade all contribute to a decent feel. Let off has a fair bit of creep, but gently drag through it, and the release is fairly predictable.

So, what can be expected in terms of down range accuracy with these tasty looking Winchesters? Well I stuck with open sights with the Model 45, since it came fitted with those glowing fibre optics, and here, adjusting the sights did prove slightly awkward, with my final setting on the rear sight, still shooting a couple of inches low at 20-yards. The sight picture itself though is excellent, and so was resultant accuracy, with ¾-inch clusters easily achievable at this range. You can of course fit a scope to the 45, but, as I’ve often stated, open sights can be educational in the basic art of shooting, as well as great fun.

Scoping up the 45RS is simple enough using the dovetail rails, and I opted for a satisfyingly compact Hawke 2-7x32 AO model, which just seemed to perfectly complement this Winchester’s ultra-sleek profile. Using both H&N Medium Sniper, and Air Arms Diabolo Field pellets, I was able to achieve half inch c-t-c groups fairly consistently over 25-yards, shot from my over-the arm FT sitting position, and whilst I had to initially stop to add a recoil arrestor block, as the scope was on the move, the performance overall was pleasing. It really is standard procedure to fit a onepiece mount on springers, so I shouldn’t have been surprised.

Okay, admittedly this pairing of Winchester 45s offer nothing technically new, but they both come very well presented, have plenty to offer, and are eye catching in their own right. For me it would have to be the slightly more stylish 45RS, for that angular forend and neat silencer in tow. Yet both are comfortable in the aim, look the part, and have plenty of performance to back it up.