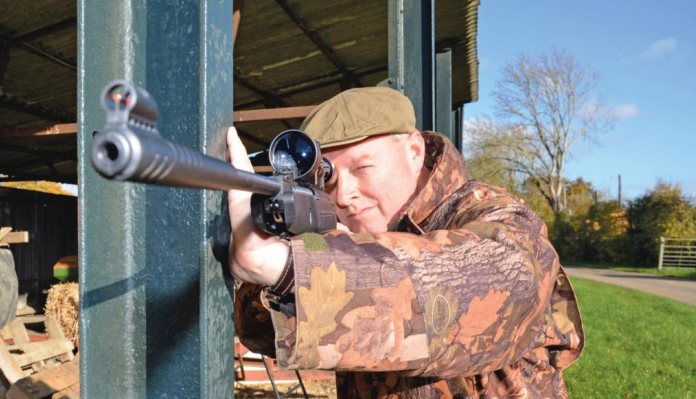 Budget springers continue to be popular and Turkish brand Hatsan are specialists in the field, with a model for all tastes and pockets. One of their very latest products is on show here - the Airtact PD - and whilst I’ve been scratching my head as to just what those initials may stand for, there’s no doubting the sheer fun to be had with this feature-packed rifle.

A lot of fun

At a quid under £100, this is on the face of it, great value for money, and having now had a good test period with this gun (apparently based on the action of Hatsan’s 900X model) to evaluate and get a proper feel, that assessment is going to stand. First impressions are all about the synthetics, and whilst the fairly basic moulding confirms the Airtact PD’s budget status, the pleasing configuration and satisfyingly dense compound that’s used, is such that it all feels rather impressive. A trendy skeletonized butt section with large thumb-through cut-out grabs the eye, but that raked and contoured grip and sleek, rounded forend confirm the stock’s functional credentials. The panels of moulded stippling work well too, adding further grip to the textured finish. Not sure about the rock hard rubber shoulder pad, (what’s that all about?) but you can’t have everything.

Looking to the action, the blued barrel and cylinder are a little dull, but at this price point, this is no time to dwell on negatives. Hatsan, presumably in a bid to reduce overall weight, use a nylon/synthetic breech block, and the steel barrel passes through this. Other features include a synthetic wrap-around dual scope rail system, automatic safety catch, fibre optic open sights, 2-stage adjustable trigger, and plastic barrel cocking aid. The result, along with the distinctive stock, is a profile that really looks the part.

Fibre optic open sights are always welcome on this class of rifle. For beginners, I would wholeheartedly recommend a slow introduction into our world, learning the basics and appreciating the simplicity and finer aspects of shooting, right from the start. Fibre optics allow for a bright image, and with the Airtact’s foresight offering a red element within a hood, and the rear sight ‘notch’ formed by twin green elements, target acquisition is made that bit easier. The rear sight is a neat little design too, it is fully adjustable via the finger wheels.

Fitting a scope is simple. Look closely at the rear portion of the main cylinder and you’ll notice that the top half is actually plastic. I was intrigued with this fairly radical approach, so couldn’t resist a closer look, removing the three screws underneath and pulling the action out of the stock. Hatsan has effectively devised a plastic shroud that sits around the rear portion of the cylinder, forming the scope rail and an integral arrestor block. The use of plastics here I presume helps slash production costs, and there’s no doubt it works. So, dual scope rail system, what’s that then? Good question. Hatsan have been quite clever here, as that unusual scope rail actually takes conventional 11mm dovetail clamp mounts on the central rails or Weaver/ Picatinny style, using the outer.

Of course, what lies at the heart of this model is the time-honoured break barrel system, and exposing the breech is easy since the barrel breaks and locks up with a minimum of fuss. The cocking stroke is also pleasingly easy and smooth, helped in no small part by that moulded foresight assembly that doubles as a cocking aid. Cocking the action sets the automatic safety catch at the rear of the cylinder, and it’s very similar in looks and operation to that of the old classic Webley Omega. For those who can remember back that far, nudge the resettable tab forwards and the shot can be taken. For the record, this style of safety setup prevents the action from being decocked without firing, but it’s probably a fair trade-off.

On test, the firing cycle did feel fairly unsophisticated, with a fair bit of recoil and significant spring resonance. However, I suspect there will be a fair bit of variation from one example to another as they leave the factory, and a correct lubrication regime would significantly improve the firing cycle. If this were my gun, that’s where I’d start. Remember the asking price though, as to expect too much is unfair for sure.

Get past the twang and the feel of the contoured pistol grip plus that cosy stock material and configuration, combine really well. As for the trigger, it’s basic, with a small amount of creep, but the plastic blade is nicely shaped with a broad flat surface. This makes a huge difference to the end feel, and in use, is more than acceptable.

OK, time for some performance figures. Chronograph testing revealed some interesting results, and starting with BSA Red Star pellets (8.02-grain), I recorded a total spread over 10 shots of just 11 FPS. Kinetic energy was a bit low with these, at 9.75 ft/lbs, but they were tight in the barrel, which always explains a lot, forcing the gun to waste energy just to launch the pellet. Switching to Weihrauch FT Exacts proved a good move, and with consistency still impressive at 13fps, and energy roughly where it should be at 10.8 ft/lbs, it amply demonstrated the value of experimentation in finding the right ammunition for the job. Similar figures came from the Air Arms Diabolo Fields. Accuracy over 25 yards with my .177 example produced groups of around 3/4” c-t-c using the quality Diabolo Fields, with just slightly larger clusters using Weihrauch FT. As for BSA ammo, it’s fair to say my gun rejected them!

Overall then, this Airtact PD gave a damn good account of itself, with very respectable results, especially given that super-low asking price. A great deal of fun, and packed with features- all for £99.