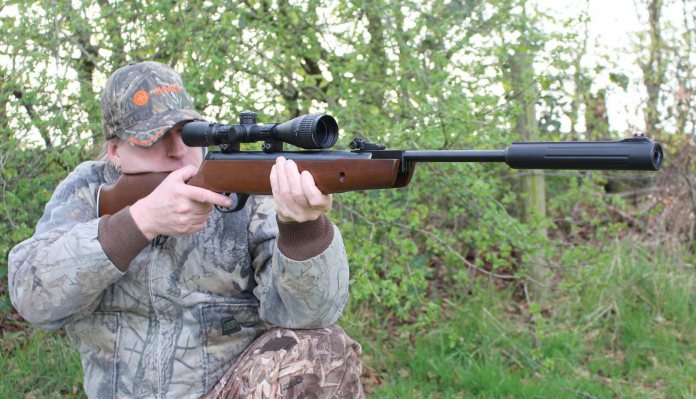 Considering the bargain-basement price tag of the Hatsan Breaker 900X, you wouldn’t initially expect too much to write home about in terms of performance or features.

Well, don’t be too hasty to judge, as they say, because Turkey-based gun manufacturers, Hatsan, have come a long way since their introduction into the UK. If they’ve proved anything in that time, which has seen them rise from lower league players with only a few springers, to offer to a company with a large selection of quality spring powered, gas-ram and PCP rifles on their roster, they have certainly released air rifles to impress and are seemingly still on the up.

In fact, it’d be specifically pertinent and true to say that they certainly know their springers, many of their higher priced models have become very popular sellers. I mention the latter specifically because the 900X is going great guns already and importers Edgar Bros are more than pleased with the reception it quickly gained and its continued interest to a certain sector of the shooting public. So, let’s see why its proved so popular…

Although the hardwood stock is quite plain, it’s certainly a wellthought out, practical design and of a much better quality than you’d expect of a rifle in this price bracket. It’s ambidextrous, with only a slightly raised comb for head position and ends in a ventilated, thick brown rubber butt-pad attached with white and black line spacers. Hatsan have also sensibly ‘crafted’ ideally positioned scalloping between the comb and rake of the neck, to allow the thumb of the shooting hand to nestle further inwards on the already slim neck, providing a very comfortable hold at this position. There are also two large panels of sharp, laser cut chequering on the grip. In contrast, the forend is bereft of any such ‘holding aids’ but has a nicely rounded underside, with the stock’s overall slim dimensions carrying forward to end in a slightly angled back tip. The wood is treated to a protective and attractive light to mid brown colour stain, reminiscent of walnut and has a semi-matte finish, helping make the woodwork look quite stylish, appealing but more importantly for practical usage, there’s no doubt this is a very nice handle to hold.

As is almost compulsory now on this type of air rifle, the 900X is fitted with Hi-Viz fibre optic enhanced open sights, and in this case, they’re the genuine and original ‘TRU-GLO® design.

The rearsight layout has the seemingly now universal and very familiar configuration of green fibre optic bars set either side of the square ‘sight’ notch. Sitting neatly on the top at the rear of the breech block, the unit’s fully adjustable for both windage and elevation. The foresight consists of a raised red fibre optic bar, which, when viewed from the rear, creates the ‘bead’ that you line up in the rearsight. A system that gives faster target acquisition and can often help in low light situations. Interestingly, the foresight sits on top of what I first expected to be a dummy ‘can’ but it soon proved itself to be a capable silencer and useful cocking aid. Speaking of which….

The Breaker 900X has a solid detent and requires a slight tap on the top of the barrel to unlatch, whereupon the cocking stroke is both quite smooth and relatively lengthy. At the end of its travel, the auto safety pops out rearwards at the back top side of the air cylinder; it’s a safety design that many companies use and one that’s ideally positioned to be operated with the thumb of the shooting hand. It’s worth noting that the rifle also features an anti-beartrap; so, once cocked, the rifle needs to be ‘shot’ to be made completely safe. However, the auto safety when disengaged by pushing inwards (upon which you can see a red dot, visually indicating its live fire status) can be re-set at any time by simply pulling the ‘catch’ back, if you decide to not take the shot.

More good news, is after direct pellet loading; the breech locks up solidly again when returned to the closed position, thanks to the large wedge shape detent lock and everything’s kept air tight due to its chunky breech seal. The adjustable trigger unit has a nicely curved metal blade, and although not the usual ‘Quattro’ mechanism that the company often fit to their springers, is quite predictable once you become accustomed to this ‘pseudo’ 2-stage unit’s let off point. I use the term ‘pseudo’, as the trigger can be adjusted for length of travel and pull weight. It can be adjusted without removing the action from the stock; so; many will be thankful of the ease of access (through the underside of the synthetic trigger guard), but care must be taken, as adjusting this type of unit can sometimes be a balancing act, in the sense of what you gain in one aspect can affect the other.

The rifle certainly has hunting potential, so I scoped up with a moderately sized optic. Scope of choice in this case being a Hawke Airmax EV 4-12x40 AO, which proved a good choice for maintaining the rifle’s inherent balance and handling characteristics. Incidentally, the rifle comes with a dual position arrestor strap already screwed into pre-drilled holes on top of the receiver. Some, as I did, might find this needs removing, depending on the scope being fitted, but as recoil isn’t in the least unruly, I wouldn’t say a ‘stop’ such as this to prevent scope creep is required.

Once set for a 25-yard zero, the .22 calibre rifle on test proved that it will bring home the bacon at medium range but I noticed it preferred pellets that were tight in the bore, usually the case with rifles that have un-choked barrels. Also, although the ‘synthetic’ can does a fine job of taming muzzle report, you can’t silence the internal noise of a springer completely but even so, I was still pleasantly surprised at the performance of the action in this department, all further supporting my view that the 900X gives quite remarkable value for money!

Granted, the trigger isn’t the most sophisticated of units, but it has enough adjustment that it doesn’t let the rifle down. Also, there are many standout features, such as the practical but very thoughtfully designed stock, very useful open sights and that unique but highly effective silencer, which all combine to make a mockery of the bargain basement price tag.

To sum up, the Hatsan Breaker 900X performs like some rifles costing twice as much and I don’t say that lightly. Obviously, there are minor gripes, such as the finish of the metalwork isn’t exactly ‘mantelpiece’ material but remember the price tag and remember it’s how a rifle performs that’s more important than a mirror finished action!