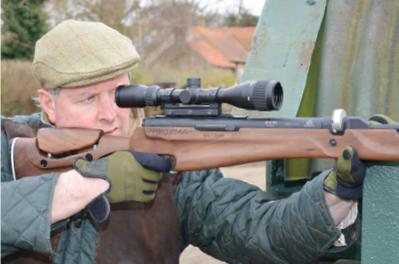 Take a look at Hatsan’s latest product catalogue, and it will, believe me, blow your mind! I picked one up at the British Shooting Show, and the sheer quantity of different models and specifications is truly amazing. The catalogue is nearly half inch thick and it’s all airguns, amazing! Obviously, not all the models are intended for our market, and UK importers, Edgar Brothers, have to make some commercial decisions on what they bring in, but the plethora of models remains astonishing.
On test here is the brand new Hatsan Proxima, and at the time of compiling this review, this model hadn’t even made the Hatsan listings yet; so, it seems that this prolific Turkish manufacturer has a design department on steroids!

Many models in Hatsan’s extensive line-up are admittedly, variations on a theme, yet the new Proxima is something very unusual – a gas-ram powered under-lever rifle, incorporating a multi-shot magazine system. An extremely stylish walnut sporter stock is a big plus point too, and there’s plenty of features crammed in, that all come as standard.

An adjustable cheekpiece, thumb-hole grip, adjustable butt section, magazine storage in the stock, fitted sling swivels, Hatsan sling, an auto and manual safety catch, Picatinny and conventional scope mounting, SAS Shock Absorber System, and the company’s renowned Quattro adjustable two-stage trigger. Plenty to get through then. Pick up the Proxima for the first time, and it’s instantly obvious that this is an ‘adultsonly’ affair. At over 45-inches in length, and 9.3lbs in weight, it’s is a big, bold design, and not for the faint hearted. I really like the styling of the stock, and it’s good quality Turkish Walnut too, with some nice figuring on my test rifle.

The ultra matt finish sets it off nicely, but the configuration and features are what really grab the eye. I’m always amazed at the wood quality on Turkish guns, be they airgun or firearm, as it’s superior to most other types and not that expensive either! That slimmed down thumb hole pistol grip, combined with the unusually long, well-shaped forend, comes together nicely. But add in the fully adjustable butt section, and it’s clear that the Proxima has been designed to fit the shooter and allow a ‘tweakable’ position. Adjusting the cheekpiece is simply done,by gently slackening off those large slotted bolts on the side of the butt, raising or lowering the cheek section, and nipping up the bolts at the end. Perfect scope eye alignment should be the result. But there’s more. Hatsan include three small butt spacers with this model, and these can be fitted by unscrewing the rubber butt and inserting them alongside the existing spacer. One is already fitted, so around ¾-inches can be added or taken away, which can make a big difference to the length of pull, (end of butt to trigger blade) and correct handling.

Hatsan has a reputation for robust construction, and the Proxima is typical of their output. The matt black finish to the cylinder and block (curiously termed black chrome), looks the part and contrasts well with the blued barrel and lever. Indeed, the only plastic to be found is the trigger guard, safety catch and under-lever catch assembly. Fitting a scope is easy with this model, as we get dovetail rails with Picatinny/Weaver style cut-outs- and Hatsan even throw in an arrestor block, so the scope’s going nowhere!

Okay, enough of the preliminaries! It’s time to get started with the main featureand that’s the fact that this Proxima comes with two magazines as standard offering; 14-shots in .177, 12 in .22, and 10 in .25 calibre are available. My test model was in .22, and filling the magazine is as per the FXstyle. Twist the clear cover anticlockwise, all the way round, and then from the back, insert a pellet skirt-first. This will hold back the mechanism. Flip the mag over, and drop a pellet, nose-first into each chamber, and it’s now ready to go. The second magazine supplied can also be pre-filled and then stored in the holder recessed into the underside of the butt. All very neat, and commendable attention to detail.

To release the cocking lever, the small brass looking stud catch under the muzzle assembly needs to be eased forward- and here comes a niggle, as in use, this is fiddly and awkward! Reminiscent of Weihrauch’s early efforts for the HW77 catch, the Proxima deserves a more streamlined, finger-friendly design. The only reason not to just use a ball detent, would be that a sling swivel may be mounted on the lever, yet since Hatsan already fit a swivel to the stock, that problem is already side stepped. As it stands, the current set-up is super secure, but irritating.

Cocking effort is modest, and very smooth, but the Proxima is a big rifle all round, and the sheer heft and dimensions take some handling. At this stage, the fullmagazine needs to be pushed into its slot from the right-hand side. I have to say, when I first took to the range with this rifle, I did spend a good while trying to coax the magazine ‘fully’into its slot, only to eventually realise that it’s been designed with a ¼-inch gap to the left! Well who’d have thought it? With the cocking stroke completed, the spring-loaded safety bar on the right side of the action, now needs to be depressed, to allow the under-lever to return. The first pellet has now been automatically chambered and is ready and waiting. Subsequent cocking of the lever will index each shot in turn. At this stage, it makes sense to adjust the trigger to suit, and with the Quattro unit fitted, that means plenty of adjustment. First stage weight, travel, and second stage weight can all be tweaked, and the Quattro is a surprisingly good unit for a spring-powered and gas ram gun, and way ahead of many rivals. I ended up with a very light release, just as I like it, and the set-back blade is spot-on for comfort.

So, how does this model feel to shoot? Well, the magazine system cycled faultlessly, although the audible play as the mag moves within its slot, is a little disconcerting. Fast-fire shooting is also slowed by the necessary operation of the safety bar, but everything functions well. The Proxima is also noisy, and my test gun was quite lively in the shoulder, which may appeal to some shooters, who want sensation over the dead feel of a pneumatic for example. Hatsan’s SAS Shock Absorber System, where a metal leaf spring is supposed to dampen the recoil characteristics is much ado about nothing in my book.

As for the Vortex gas-ram system being smoother than a springer, there’s obviously no spring twang, and the Proxima’s firing cycle is quick and slick- but there is still plenty of movement and recoil. Initial accuracy testing with this Proxima did highlight a rather pellet fussy barrel, although in my experience, this will vary slightly from one gun to another. My .22 calibre tester surprisingly, wasn’t too keen on JSB made Air Arms Diabolo Field ammo, (a batch I know to be good), but began to perform with Kaiser pellets, returning groups of around an inch over 30-yards. Over the chronograph, 10-shot strings with the Kaisers, showed excellent consistency – and with 9fps total spread the norm, and energy levels just shy of 11ft/ lbs, the Proxima performed well.

So, after putting this model through its paces, it’s time to consider what’s on offer here. That curiously off-set magazine, and the niggle of the underlever apart, the Proxima is a striking piece of design work, from one of the most prolific airgun manufacturers, currently in operation.
At £682 list price, this model has in theory, some stiff competition, from some superbly accurate big-name rivals. Yet that combination of gas-ram power plant and multishot capacity, is near unique at the moment! Couple that with an extensive list of features and add-ons as standard, and Hatsan’s boldly styled Proxima should still find many fans.