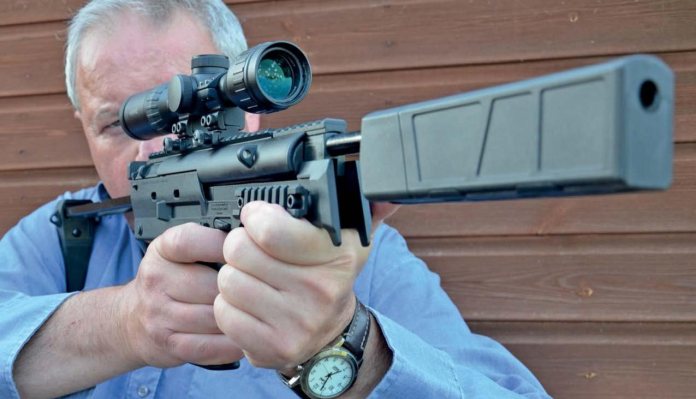 Umarex is the world’s largest manufacturer of replicas (made under license) and for the record, they were also the first company to be legally licensed to produce CO2 versions of Heckler and Koch (H&K) firearms.

On test here is a brand-new model from Umarex, the H&K MP7. Visually, it really looks the part, following the external profile of the original closely. The real version, incidentally, is actually the gun carried on patrol by the British Nuclear Police, and with that box-style silencer up front, drop-down pistol grip, extendable skeleton stock, plus multiple accessory rails, it’s a distinctive gun indeed.

There are several neat features about this Umarex, but perhaps the biggest surprise comes with the fact that it isn’t CO2- powered at all. Look along the top Picatinny rail and you may just notice a split near the front, and this is because what we have here is actually a rather cleverly designed break-barrel, springpowered airgun!

The synthetic body is a one-piece affair and incorporates dummy catches in the moulding and a dummy ejection port. Plus, there are twin Picatinny accessory rails on either side of the forend. There’s a manual safety catch, pseudo-2-stage trigger and that extendable stock, so plenty of features to back up the alluring visuals.

With the stock retracted, the action is just 22.6” in length, and with the manufacturers playing it safe and not wanting to fall foul of the law relating to the length of an air pistol against a rifle, the easiest move was to produce a gun which can only produce air pistol energy levels, thus circumventing any issues at a stroke. So, sub 6 ft/lbs in other words, and we’ll obviously look at that in more detail in the range report.

So, what we have is a springer that can effectively be shot as an elongated pistol or as a fully extended rifle. Versatility and fun in equal measure, I’m sure you’ll agree.

This model is made in Germany, and as someone who has visited the Umarex production facility and seen the level of commitment and modern technology utilized along the way, I can certainly appreciate the refinement on offer here, compared to several rival products. Everything feels well made, from the precision of the moulding for the synthetic stock, down to the finish and machining of the barrel and breech area.

I like that drop-down grip and it’s surprisingly comfortable in the aim, enhanced by the moulded textured surface. What looks like a lip for a removable base to the grip, is again a dummy feature, but it all helps the illusion that many demand and appreciate with this type of look-alike model.

Right, time to get down and dirty and see what this thing can do.

With the entire top edge of the receiver covered in Picatinny rail, getting a comfortable position for some form of sighting system is unlikely to be a problem. This type of gun lends itself to a super compact red dot sight perhaps, but for my test, I chose a Hawke Airmax 2-7x32 optic, as it is not oversized and won’t unbalance the combo. And whilst we are talking sighting systems, I have a couple more observations. Firstly, and stating the obvious, be mindful to ensure that whatever is bolted on top doesn’t foul the opening breech section as the barrel moves through its arc. It will obviously be a scope on the rear rail, but my second point is, if you do plan on shooting the MP7 as a pistol, then a sight with longer eye relief will need to be utilized, and that short section of Picatinny on the breech block may just come into its own here.

Either way, the options are many and varied, be that a dedicated pistol scope, laser or red dot etc.

Look underneath and you’ll notice the neat, articulated cocking linkage, and this means more efficiency and a smaller cut-out in the stock’s forend. It is practical attention to detail, and undoubtedly a contributory factor in the MP7’s fairly easy cocking stroke. It’s smooth too, but of course, with scaled-down pistol power, there’s no excuse for it not to be easy to operate, given the dramatically reduced load and spring inside. The breech area all looks refined and pushing home a pellet nice and flush, to avoid deformation, reminds us just why the humble breakbarrel format still accounts for such a large percentage of overall airgun sales.

For the record, this model is available in .177 calibre only, and that bold ‘box’ up front is only a mock silencer, as the barrel doesn’t vent into it at any stage. That said, given the ultra-short barrel fitted here, the mock silencer still has an important role as a cocking aid, and it does it very well.

So, what about the long and the short of it? I am, of course, referring to the extendable skeleton-style stock. Well, with the stock retracted, the MP7 can be shot pistol style, probably double-handed, unless you have particularly strong wrists! But with around 8.5” of stock extension waiting in reserve, it’s rude not to, as they say.

Now, here’s my main negative with this gun, and that’s the irritating, fiddly and even slightly painful spring-loaded catch that’s found at the rear/right of the receiver. This ribbed catch needs to be pulled up, whilst the rear stock assembly is pulled out, and that is for once, a lot harder than it sounds. This is because the catch is massively oversprung and hard to operate!

The stock is designed to stop midway and click into position, courtesy of a small cut-out. Fancy indulging yourself and going the whole hog? Then tackle that pesky catch one more time, apologize to your fingernails, and the fun can begin in rifle mode.

The manual safety catch fitted is the cross-bolt sitting just high and rear of the trigger. It flags red on the left side when the gun is live and ready to fire, but as I’m no fan of safeties, and ‘manual’ means we can ignore it, I did just that. With the synthetic butt wedged into the shoulder and the MP7 in the aim, the handling is transformed. Admittedly, the complete lack of a cheekpiece takes some getting used to, and I can’t help thinking a small snap-fit plastic comb, perhaps held in a pressure slot on the airgun’s body until needed, would surely add pence to production costs.

As it stands, this is no time for negative thoughts and nothing can take away from the fun to be derived from having a collapsible stock, which is accentuated by that glorious, bold and macho styling that the MP7 does so well.

Now for the test figures. First the chronograph report, and feeding the airgun some JSB Exact ammo returned some commendable consistency figures, with an 8 fps total spread over the usual 10-shot string. Good start.

Accuracy-wise, the MP7 did prove slightly pellet fussy, and if my test gun was at all representative, it seemed to favour pellets of a slightly looser fit in the barrel. Of course, given the vagaries of airguns, it’s highly likely that microscopic differences from one barrel to the next will mean another example of this very same model would behave differently. Such is life.

Back on the ranch, and after a couple of brands including BSA Goldstar not quite delivering, the JSBs came to the rescue. Tight, ragged clusters over 20 yards were enough to demonstrate potential performance, and I retired suitably impressed.

Replica-style guns continue to be extremely popular, and models such as this Heckler & Koch MP7 are what Umarex do best. Unusual, well-made, versatile, effectively two guns in one, with plenty of performance to back up the visuals. It is simply a great little airgun. Oh, and did I mention the price?

Thanks to Range & Country Shooting Supplies in Sleaford, Lincs., for loaning me this rifle for review.