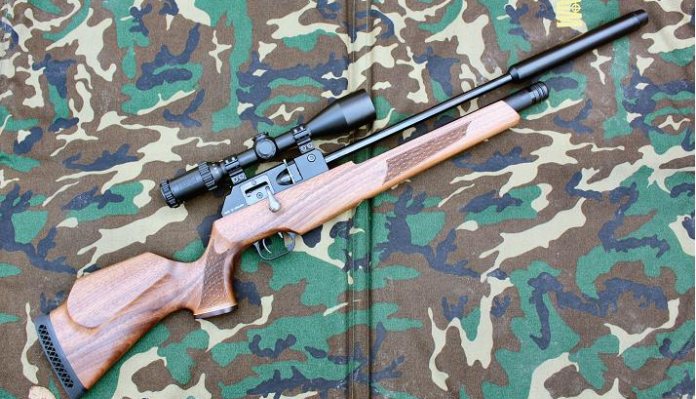 As many airgunners will know, Impact Airguns were born from the ashes of the old Theoben Engineering. Since then, Impact has worked steadily but progressively in launching high quality gas-ram and PCP air rifles – yet more indication to where their origins lie. My first taste of the new company’s wares was the gas ram powered RM 100 I tested a while back. I found it to be a very appealing break barrel action that bore many features admirers of Theoben rifles like myself appreciate!

However, I now have the chance to test their GSX 100 multi-shot PCP and although they have built on their PCP range since its release, this was the first ‘pre-charger’ they launched. It has a stylish yet conventional barrel over air reservoir design and as a launch pad for the range it displays many up-grades that Impact can now have tagged to their credit.

The ambidextrous American walnut stock boasts a substantial yet well defined, medium height cheekpiece and thick ventilated black rubber butt pad. It has a relatively slim neck, generous thumb channel and the well-formed pistol grip drops steeply down to a rosewood end cap with maple spacer. This combination offers a comfortable hold for both the thumb over or up styles.

The lengthy and slim forend has a well-rounded underside that tapers smoothly upwards to end in a rounded tip. Panels of laser-cut chequering adorn both main grip areas and are as cosmetically appealing as they are useful. At 7.3lbs un-scoped the GSX is surprisingly light - combine this with its overall length of 41.3” and it’s hardly surprising to discover it effortlessly and easily comes up to the shoulder. The ambidextrous stock model is known as the ‘standard’, as there are now dedicated right or left hand options.

The fill point is at the end of the air reservoir, protected by screw-off cap. Removing it reveals what some may feel is a rather old school, bayonet-style fill point. Although the top end PCP market is dominated by probe design ‘fillers’, this type of unit is still just as efficient! The rifle comes supplied with a stainless steel bayonet fill adaptor and hose (already attached) for ease of use.

The GSX 100 is offered with either a 120 or 180cc air reservoir, the test gun was the former capacity version. I purposely chose this as ergonomically the overall action and stock look very well suited. Also it’s slightly lighter, so suits me, as it’s similar to the guns I hunt with!

It proved a wise choice, as despite its relatively short air reservoir; from a recommended 200bar fill it still offers 70, regulated shots in .177 and 80 in .22 calibres. It’s fitted with an air regulator and you can expect that many ‘flat-lining’ shots before consistency begins to drop off. You can squeeze out 10-15 more before accuracy will be noticeably affected too. As this was my first ‘taste’ of a regulated Impact PCP I shot a full fill of the .22 calibre test rifle over a chrono and found it to give a level of consistency many other top airgun manufacturers strive to achieve. I’m sure many airgun hunters will agree at such a high level of consistency those are far more than enough required on a usual hunting foray.

The GXS is now available in .20 and .25 calibres with shot counts quoted as 70 and 85 respectively and of course those are also ‘regulated’ stats! To add to the ease of use, there’s a small air gauge set into the underside of the stock, it’s deeply recessed into the wood to help prevent it from accidental damage.

Obviously there are similarities with Theoben rifles of old, but that’s all they are! The stainless steel bolt that runs the short throw action is well designed and generously sized for ease of use and curves downwards to lie almost flush alongside the action both open and closed and runs smoothly. Feed is from a 12-shot, Perspex-fronted, sprung removable rotary magazine. It’s obviously had up-grades from the original it’s based on and works faultlessly, indexing easily to precisely position the next pellet to be probed into the choked, 14”, free-floating, Lothar Walther tube. I’m reliably informed Impact add the ‘choke’ themselves - something that requires a high level of engineering skill and experience in the ‘perfection’ of any barrel manufacturing process.

To fill the magazine; the bolt is pulled rearward and dropped into the rear keeper slot and the drum removed. The Perspex cover plate is then rotated anti-clockwise under spring tension until the first empty ‘numbered’ chamber is exposed. Pellets are dropped head first as the chambers appear, while you allow the cover plate to slowly return under control to its original position. Slide it back into its housing in the action block and close the bolt to chamber the first round. The .177 rifle offers a 17-shot capacity, which will appeal to some shooters no doubt!

Two more features of this unit I feel noteworthy besides the large capacity, is the fact the chambers are numbered and can be clearly seen, indicating your ammo status. I recommend hunters keep an eye on this, as once empty, the magazine blocks the bolt from closing. I mention this as I’m sure I’m not the only shooter who’s got caught up in a hunt, only to spot a target, prepare a shot only to experience that sickening ‘no pellet access’ feeling upon cycling the action.

The action block sits quite high from the top of the stock but on inspection this is so the magazine well can be cut deeper, allowing it, once in place, to sit lower in the metal work. So once in place it hardly protrudes above the action, so no issues for those who like a low-mounted scope! I tested this and how it’d feel upon handling by fitting an MTC Mamba 3 – 12 X 44 – a scope primarily designed to sit low to the action for those who prefer such an arrangement. In use, it proved to suit the rifle and with a 25yd zero set I soon watched the rifle put pellets into a .22 calibre sized hole.

Should you prefer a more conventional and larger objective scope needing higher mounts, the cheekpiece still allows comfortable and correct head placement, further indication of how well designed and suited both action and furniture are.

The trigger in most respects seems to be the same as what Theoben termed as their MkIV unit. I’m sure it’s been up-graded to be in-line with the rest of the rifle, as this 2-stage adjustable ‘match grade’ unit released shots without a hint of creep. The layout is the most familiar aspect though – that being the manual safety blade sits directly in front of the trigger inside the metal guard. Ideally positioned to be pushed forward to put the rifle in ‘fire mode’ when ready to take a shot. It’s also silent in use. Also, the firing cycle is impressively smooth, in part because of Impact’s own ‘Soft-Tech Hammer System’, which includes a high-tech synthetic buffer that reduces noise as it strikes the valve stem.
Talking of all this ‘hush’ brings me to highlight the unit that dominates the muzzle, that being the A-tech Silencer sitting imposingly up-front. However, as it measures a full 10” in length, with a 1 ¼” diameter, you’d expect it to. It works efficiently, reducing muzzle report to a whisper and as the main unit and housing of the can are manufactured entirely from high-grade aluminium, and it’s not at all front-heavy.

In my opinion it’s impossible not to like the Impact Airguns GSX 100 on many levels, due to the obvious quality of manufacture and design. Not only is it stylish, cosmetically attractive and ergonomic but all the ‘features’ installed for effective noise reduction are big plus points for practical, in-field hunter usage. Couple this with an outstanding level of accuracy, handling and ease of operation and it all combines to make the rifle even more of an appealing and high performing top end multi-shot PCP. Why the company term this as ‘their starter model’ has me bewildered but only has me itching to get my hands on other models they place higher up on their roster.