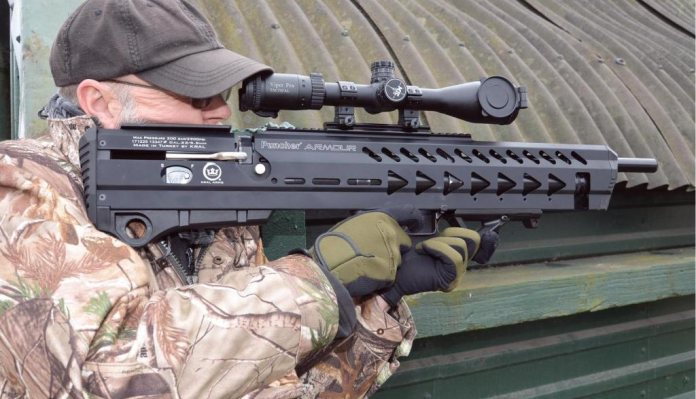 As Bullpup-style airguns continue to enjoy an unprecedented wave of popularity, it’s a brave manufacturer indeed, that persists in ignoring the demands of this sector within the airgun industry. Turkish brand, Kral, recognised the phenomenon a while back, and their Puncher Breaker was the result; sitting the action from the Puncher (their first PCP) right into the back of a purposebuilt thumbhole stock. Several versions were available, but there was clearly more to come from this increasingly popular brand. Building on the success of that model and its derivatives, the company has now seen fit to introduce a full-on, militarystyled version, called the Puncher Armour, and it’s this rather radical airgun that features here.

It’s stating the obvious of course, but the styling of the Armour is guaranteed to divide opinion, and if you don’t much care for airguns looking like this; then this new model is unlikely to appeal. Indeed, to quote the old cliché, ‘look away now’! But for a growing band of enthusiasts, determined to invest serious cash in these distinctive creations, this beefy specimen is highly likely to make any short list.

So, just what have we got here, and what are we getting for the asking price of £525? Well, the Puncher Armour is a full-blown Bullpup, let me explain for the uninitiated. As such, the stock has no butt section, so the barrel/action is pushed back into the shoulder and a midpositioned pistol grip is used. This results in a considerably shorter and better-balanced design with no loss of barrel length as with a standard carbine format and an increase in handling. The Armour’s pneumatic action sits just 3.5-inches from the rear of the stock. It’s effectively a full aluminium outer chassis that Kral term a Tactical Body Stock (TBS). And if it looks familiar, then it is; as it’s reminiscent of Evanix’s Rainstorm model, and the profiles alongside are actually very similar.

Interestingly, the TBS can be specified in four colours- Black, as per my test gun, Army Green, Burnt Bronze (orange; no seriously), or Ocean Blue. Completing the Armour’s specification is a side cocking lever positioned at the rear right, on top is a long Picatinny section for optics and Kral supply a riser mount too, integral pressure gauge, power adjuster, quick-fill, probe-style charging, an angled fore grip (AFG) much like the Magpul design, adjustable cheekpiece, spare magazine storage, and shrouded barrel. In addition, this model comes supplied with two multi shot magazines, and even a single shot loading tray.

A comprehensive specifications sheet, then. Kral also supply these guns in their own plastic hard case, except this offer isn’t quite so great, once you realise that the fitting of almost any scope renders the combination too deep to fit back inside, a fault with a few guns out there now and it does seem a bit mean. A slightly bigger case would be more worthwhile, with a view to using it long term instead of just for purposes of initial transit!

First impressions are favourable, and the subtle matt feel to the TBS is appealing. This component is one-piece, designed with the forend section ventilated. Due to the straight-line layout, you need to use the riser mount to get a comfortable eye/scope position. Synthetics are used for the height-adjustable cheekpiece, butt heel stop, front panel cap, AFG, and pistol grip. All are sufficiently well moulded, but with an overall weight of 9lbs, the Armour is no lightweight. At a shade over 31-inches, it is however strikingly compact.

Look to the butt, and that synthetic cheekpiece plate can be adjusted for height, but it’s fiddly. First, unscrew the circular knob and remove it. Then slacken off both Allen bolts either side and gently slide the assembly up or down until the next hole lines up, then reassemble. It’s debatable whether you need this feature, as your head is already high, hence the need for the riser mount. More useful is the fact that the AFG can be moved forward/back, as it sits on a short Picatinny rail under the forend, so can be set up for best position. Unscrew the Phillip’s headed bolt and nut, then slide it to where it suits and re-insert and tighten. You get around 1.75-inches of travel, so different builds/grip lengths can be catered for.

Charging is via a quick fill probe, and the inlet is at the front of the cylinder, exposed in the gap within TBS. There’s a rotary valve cover, which was absurdly tight on my test gun, but after some coaxing, it finally opened. The filler probe (supplied), once attached to the air line, just pushes into the valve, and the action can then be charged to 200-bar.

Filling the magazine is the next task, and my test gun came in .22 calibre, which offers a 12-shot capacity, with 177 giving 14-shots. To fill; hold it with clear lid uppermost, and twist the lid clockwise, until the first chamber is exposed. Drop a pellet in head first, which will then prevent the spring-loaded drum from returning, and you can now fill the other chambers in turn. To fit the mag, fully open the action and slide it into its slot from the right side of the action. Return the lever, and the first shot is ready. There is a moulded cut-out for a spare magazine at the rear of the stock, which is a nice touch!

For those who favour safety catches, there is one, and it’s a manual affair on the right rear side. Operating the side cocking lever requires only modest effort, but unlike some dedicated Bullpups, where the lever is mid-positioned, the Armour’s is rear-mounted. Which means cocking the action with the gun still shoulder mounted, is awkward and impractical. Accept that fact, set the stock elements to suit, fill a couple of mags, settle down on the range, and the fun can start. Balance with this model comes in at the very centre of the pistol grip, and for me, that meant kneeling shots were very much on, but standing would need more forward weight. Personal taste will dictate, and there’s no doubting that the fast handling characteristics of the configuration will be a big plus for many.

As mentioned briefly earlier, the Armour features the power adjuster dial from the standard Puncher. On low power over my chronograph, came in around 7ft/lbs dependent upon ammo used obviously. This means a casual practise/ fun session will benefit from a greater shot count at this setting. At high power, from 200-bar fill, the figures are below, chances are you’ll run it at full power all the time.

Consistency figures, admittedly, aren’t that tight, but this gun isn’t about competition use, and to get too wrapped up in the figures is to miss the point. Accuracy-wise, using a variety of ammo, I managed 3/8- to ½-inch groups over 25-yards, I have to say with relative ease, which was quite impressive. The trigger is basic and unusually non-adjustable. However, take on the shot without too much analysis, and it trips perfectly predictably.

So, quite a feature feast then, for those of a certain persuasion, who appreciate the Bullpup styling and distinctive lines that this type of PCP has to offer. Whilst it may lack the sophistication of some of its rivals, consider the favourable RRP, and this new upstart begins to look highly competitive. Fancy being thoroughly lairy, and becoming the talk of the club range, then opt for one of the loud chassis colours, and that wish should soon be realised too! Either way, the Puncher Armour is an intriguing and welcome addition to the Kral line-up, which I suspect will find a ready fan base.