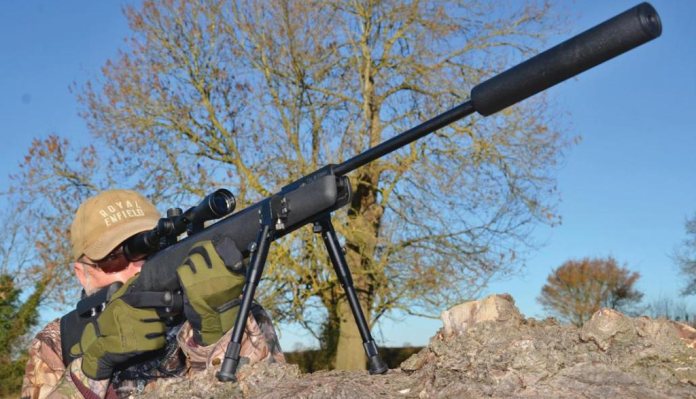 Milbro (Millard Brothers) are a brand name that is synonymous with airguns, and whilst they form part of the extensive portfolio of companies under the SMK (Sportsmarketing) umbrella here, it’s still a welcome reminder, certainly to shooters of a certain age, of guns from our youth.

Several models are available as ‘kits’ and on test here is the Milbro Target Master, an all-in deal for £180. There’s a 4x32 scope, mounts, silencer and bipod set, so on the face of it, it’s stonking good value.

This Milbro is a traditional break-barrel spring-powered airgun with some unconventional features included. Pick up the Target Master and the first thing that becomes apparent is just how dense the stock material is. It’s a weighty airgun, but not in a bad way.

Piecing the kit together is the first move and with that sizeable moddy already in place, the next task is to get the scope and mounts bolted into position on the dovetail rail. Yes, the 4x32 scope is fairly basic, but it does the job. See it as a starter scope and progress to better optics further down the line.

Whilst the moderator has a plastic body, once it’s tightened in place there’s no rattle and it all works well. The ‘reflex’ design means that the unit actually slides over the barrel and secures via an internal thread onto the muzzle. At the point at which it tightens in place, it is actually sitting 5” back over the barrel, with the idea being that it effectively only adds about half its length to the overall combo length. It still acts as an expansion chamber, mainly forward of the muzzle inside this one, but as I’ve often highlighted, the decibel eating properties when fitted to a springpowered model, of any moderator, are far less apparent than when fixed to a pre-charged pneumatic, due to their respective airflow dynamics/ delivery.

Setting the cheekpiece height is a slick affair, given that finger adjuster wheel. The comb can be raised by around 1.25”, which is a huge bonus. The thread is very fine, so adjustment is just the right side of irritating! I’m nit-picking of course, and this is undoubtedly a great feature, allowing eye/scope alignment to be set spot-on.

As mentioned earlier, super-dense composite material is used to form the stock and this adds significant weight to the outfit, which will be a plus point for many and a possible detraction for others. However, set up the rig complete with those bolton bipod legs and the sniper feel and deadweight start to fall into place.

OK, so let’s take a look at the bipod
in more detail. Twin legs come supplied and these fit straight onto the Picatinny specification side-mounted accessory rails. Hand tighten the bolt heads, then nip them up securely with a small coin if deemed necessary. Thereafter, the bipod legs themselves can be adjusted via the spring catch, to sit up/ forwards and out of the way or sit down to support the gun. Unscrew the tips and the ends are then spring-loaded, which can aid with absorbing recoil and movement, plus also help achieve a level shooting position when on uneven ground. Leave them open as ‘active’sprung legs or tighten up each end to the desired height via the screw tips.

Granted, shooting from a hard surface is never going to be quite as successful with a recoiling gun but there’s no doubting the fit and feel of this combo holds much appeal for versatility and a different shooting experience.

Cocking the action is fairly easy, given the extra leverage afforded by that whopping moderator. Push a pellet home flush in the breech and lock the barrel closed again. At this point, the unusual auto-safety catch at the rear of the cylinder needs to be pulled rearwards, to the ‘fire’ position.

The trigger is a pseudo-2-stage affair and given the broad, ridged synthetic blade, the release pressure is acceptable, after squeezing through the initial creep. As for the shot sensation, the action of my test rifle was surprisingly lively given the gun’s weight. There was plenty of spring resonance and recoil, but for anyone wishing to push the Target Master to its limit in terms of performance, the spring piston action would respond I’m sure, to a tune and correct lubrication - something that rarely happens at the factory stage.

Billed as a ‘high power’ model on the box, this claim I have to say didn’t quite materialize. Great consistency though, using the newly released Wasp pellet in .22, with 7 FPS posted over a 10-shot string. As for the energy figures, 9.2 ft/ lbs with the Wasps and 9.1 ft/lbs with Air Arms Diabolo Field was about the best I could muster on test, which did seem just a little disappointing. These models will often vary quite considerably from one example to another, however, so I could just have been unlucky with the gun I had through for test.

Accuracy wise, expect 1” groups over 30 yards, which is sort of par for the course from this grade of hardware. For the record, I managed those groups shooting from my favoured over-arm FT sitting position, as this allows the gun to naturally recoil and absorbs much of the kick.

So to conclude, given this model’s bargain status, it would be well worth getting the action tuned and played with, to calm it down and raise the energy levels slightly if necessary. Then, upgrade that low mag scope. Remember the all-in asking price though, and it’s hard not to see the Milbro Target Master as a good deal. Plus, if you like your airguns big and bold, then this model undoubtedly has plenty of character and appeal for general purpose target work and close range pest control on a budget.

Thanks to Range & Country Shooting Supplies in Sleaford, Lincs, for the kind loan of this rifle.