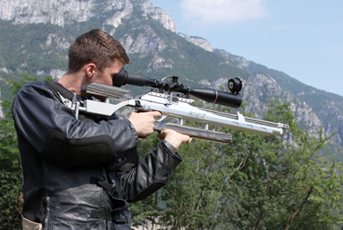 Everyday of our lives we are subjected to a deluge of advertising. Most probably passes us by. Some of it is so annoying it is surely counterproductive, although occasionally we may find it helpful and possibly informative. Marketing though, in all its forms, is obviously a powerful tool! After all when the wheel was invented if the person who did so hadn’t told other people he knew how helpful it was, on whatever the equivalent of the internet was back then, where would we be right now?

What has this got to do with shooting? Well, although it may not be stated in such an obvious manner, I think those marketing people have persuaded us that the latest pre-charged pneumatic air rifles (PCPs) are far more accurate than their older more traditional spring powered cousins. Attend any major Field Target event in the UK and over 95% of the rifles there are likely to be PCPs, it also seems like most new models launched are too.

So I am going to put the hypothesis that a modern pre-charged FT rifle is more accurate than a spring gun typically used for FT 20 or so years ago to the test. This sounds like it is a pointless exercise, but I’m not so sure, could it be that we’ve been had by those marketing types? What I propose to do therefore are a few simple ‘real world’ tests that will give me some measurable results from which a conclusion can be reached. Now to do this I need two test rifles.

In the Red Corner

Representing the modern era is a Steyr LG110. This space aged looking PCP with its aluminium chassis and anatomical grip typifies the rifles commonly used on the circuit today. The regulated action will produce well over 100 consistent, recoilless shots from a single charge of air using a crisp light match trigger to release those pellets. The LG110 has proved itself time and time again in competition, so whichever rifle it goes up against is going to have its work cut out.

Undoubtedly the Weihrauch HW77 reigned supreme on the FT scene many years ago and a vintage example would perhaps have been nice to use here. Sadly I don’t have such a rifle at my disposal so I am going to use my own Air Arms Pro-Sport. This model has been around longer than we probably realise but if the pre-charged revolution hadn’t taken place then it’s probably a good representation of what we might be using today. So the Pro-Sport is the rifle which will try to uphold the honour of spring guns everywhere, no pressure…

Ammunition is also key to this test and I am going to use different pellets for each rifle. Should I not use the same? Well my thinking is as follows. I know that lightweight Falcon pellets perform well in my Pro-Sport, but I also know that PCPs tend to prefer something heavier so I will use Air Arms Fields that I know are accurate. In this way I hope to play to each gun’s individual strengths, after all a pellet that suits one rifle doesn’t always suit another.

A 3-9 x 40 Weaver scope will adorn the Pro-Sport while a Schmidt & Bender 12.5-50 x 56FT scope will sit atop the LG110. Another mismatch I know but the different ranges I am going to shoot at are known so range finding isn’t an issue and I will use the x12.5 end of the S&B so the magnifications are at least similar.

I thought I would break both rifles in gently so I took them to my club’s indoor range. I shot two x 10-shot strings from a standing position with each rifle at PL14/06 20 yard pistol targets. By shooting 20 shots with each rifle I hoped to average out my own inadequacies. This should have given me a score out of 200 but looking at the cards they are very hard to score properly with ten shots on each.

The scores I came up with were 196 for the Pro-Sport and 197 for the LG110. One nil to the Steyr then but hardly a crushing defeat for the old AA, I was actually pleasantly surprised by my own ability using either rifle!

Moving outdoors I shot 4 x 5-shot groups at 45 yards with each rifle aiming at 25mm spots. This time I used my favoured FT-style sitting position and I chose the distance as I believe my technique allows consistent results at that range. With the groups shot I did a simple visual comparison.

As with the standing test I was happy with the groups I achieved, but those shot with the LG110 were definitely tighter. The groups with the Pro-Sport were let down by two wayward shots, pulled by me I am afraid to say.

Finally I positioned a standard 40mm Field Target at 50 yards, a typical distance you might find a target at on an FT course of fire. Here I simply shot 10-rounds with each rifle scoring 10-hits out of 10 with the LG110 and 9 out of 10 with the Pro-Sport. So what conclusions can be drawn for these simple tests?

In all three the LG110 out performed the Pro-Sport. So the hypothesis that was put to the test here holds true, based upon the evidence, a modern PCP is more accurate than a spring piston air rifle. Therefore I must apologise to marketing types everywhere for my cynicism, in future I won’t doubt a word!

However, I think perhaps though it is worth looking at the results more closely to see what else can be learnt from this exercise. Despite having at my disposal a range of equipment I have never done anything like this before. From a personal point of view I found directly comparing two very different rifles fascinating.

Obviously both rifles are completely different to shoot, but was one any better than the other? No, I thoroughly enjoyed shooting both. The Pro-Sport’s cocking and loading sequence I find quite therapeutic, it encourages a more thoughtful approach to shooting, you don’t feel like you want to waste the shot after the effort of cocking the rifle. The LG110 is quite the opposite. The speed at which it can be shot is worrying given the price of lead these days, but saying that the nature of the rifle allows those shots to be fired accurately.

One thing that surprised me a little was the difference in the optics and I wonder if that may have cost the Pro-Sport some points. I am used to shooting with high magnifications, this allows for accurate placement of the crosshair on any given target. At 20-yards I noticed little difference between the Weaver and S&B for shooting purposes although the Schmidt is noticeably brighter. However once I started shooting at the 45 and 50 yard targets it was much easier to aim with the x12.5 magnification than the x9 of the Weaver. I was a little bit out of my comfort zone with the low magnifications used in these tests!

I do feel that I have let the Pro-Sport down in this test, everyone loves an underdog but I am afraid the testing wasn’t done in Hollywood. It was always going to have it’s work cut out against the LG110, maybe if a better marksman than myself was doing this then the results would have been different! But I do think that close examination would always find the PCP to be that bit better. I am annoyed with myself for the two ‘pulled’ shots on the 45-yard group test with the Pro-Sport and that is where the key to all this lies.

The recoilless rifle was just easier to shoot. I didn’t have a single pulled shot because the nature of the firing cycle doesn’t encourage it. Technique has to be perfect to get the most from a spring gun.