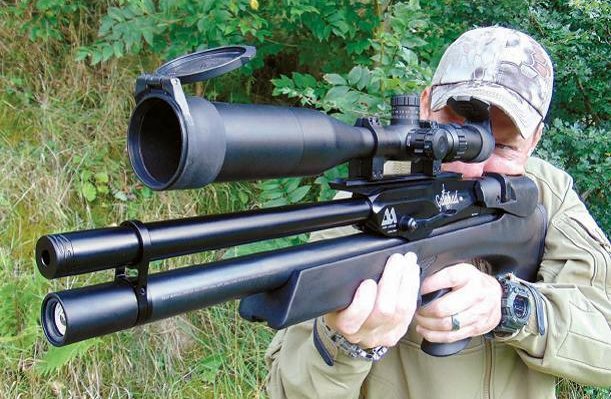 Being a lefty southpaw like I am, I often have ‘ergonomic’ issues with Bullpups, especially at the cheek piece end of the gun! This is normally due to where the magazine is located and also quite often the cocking lever. But the way Air Arms have designed their new Galahad, it seems like us ‘odd’ people have been thought about!

The magazine is located further forward of the cheek piece and rather than in the middle on the right; it’s actually on the left hand side and does not interfere with your cheek weld at all, no matter if you are a left or right handed shooter. Now for the really good bit; the cocking lever! A total redesign in both how it operates and where it is located and what hand it’s operated with. No rear-mounted bolt handle, which is always a pain on a Bullpup or fixed position side lever.

Oh no sir, the newly designed lever is now positioned on the side of the action, slightly forward of the middle and in front of the pistol grip. I say side, as whichever one you prefer is down to you, as it can be removed and positioned either left or right of the rifle. Operation consists of it being pulled down from its horizontal position until it’s vertical and clicks, then is returned back to cock the rifle and cycle the mag. Flipping GENIUS!

It seems to me a great solution for right and left-handers alike, as the former would have it on the left and the latter on the right. In this way you can maintain your position and use your supporting hand to cycle the action without breaking the all important firing hand grip and head/scope alignment. Nor lose sight of the target either! Great job Air Arms! It’s made from aluminium and is very comfortable, even with long periods of use. The only thing I would say is that it does stick out quite a bit compared to a normal lever.

So let’s get stuck in then with the rest of the Galahad! I’ve tested quite a few Bullpups now and I must admit, this one seems one of the most comfortable that I’ve shot. I’m of average build and it just fits me right, the rifle is very well balanced and just feels good when shouldered. The stock on the SR model that I have on test is fully synthetic and has nice sharp chequering on the pistol grip and forend.

Don’t be a canter!

The butt pad is fully adjustable for height, length of pull (spacers are needed for this adjustment) and it can even be angled! The build is quite chunky and there is lots of room on that cheek piece, with the magazine slot being further forward than on a conventional Bullpup. The rest of the furniture flows nicely through to the forend and feels very solid. The synthetic option has a soft touch coating and seems very durable. If you like wood, then you can get the Galahad in walnut, which by the way, looks pretty damn fine!

One aspect of the design I appreciated, and I’m sure others will, is in initial handling! When you shoulder this rifle, as soon as it comes up it is just ‘there’. Once shouldered you will notice that Air Arms has added a nice little shooting aid – a level bubble, which is a thoughtful and very practical touch. For those of you that don’t know, a bubble helps prevent you from canting the rifle over to one side and more often than not, until you have one, you don’t realise that you are doing it. Even slightly canting your rifle can really affect your shots, even on an air rifle let alone a centrefire! Once you have used one you won’t be able to do without one again! Worth noting; you can buy bubble levels for your rifle, whether it’s an air gun or firearm and these usually fit on your scope, mounts or base rail.

Moving on to the trigger, the test rifle’s unit was breaking at just over 2.4 lbs straight out of the box, not bad at all! It is adjustable and the blade is made from metal and feels comfortable. The pull is very smooth, as you would expect from an Air Arms and is a two-stage system. The safety catch is something they seem stuck with and though it works it’s not the best design. It’s a cross-bolt that is actually located in the blade itself. It works well but to be honest, I’m not a fan of safeties on triggers, it’s kind of like having the stop button on top of the go button. It’s funny, every AA gun review I’ve read always mentions this aspect and I’m surprised they have never bothered to re-think it!

Moving on to the pointy bit, the barrel is shrouded and is 19.5” long. It has an internal baffle system, which I thought it was a little loud but it is threaded so you can easily throw on a secondary moderator if you really want to keep things quiet. Now, that barrel ‘was’ free floating until Air Arms put on a polymer barrel/air cylinder, fig-8 clamp. But, seriously; this rifle is very accurate. On my 30 yard test range, it was, more or less, clover leafing with .22 RWS Super Domes (Yes, really! Even with my shooting!)

I also stretched the Galahad’s legs a little and got it reaching out to 70 yards shooting at a 6” steel gong, which it was easily capable of. Don’t write off these rifles as short range performers! The Hawke Sidewinder scope that I fitted for the test seemed to be a pretty good combination. Another good aspect of the design is that you have the option of your choice of scope base, either a dovetail or Picatinny. Worth getting a bipod bolted on to this little beauty too, as there is a rail under the forend where you can attach one.

So overall, a cracking bit of kit from Air Arms! Out of all of the bullpups that I have shot, I seemed to really get on with the Galahad. I totally love the new way of cocking and fair play to Air Arms for coming up with it. Not cheap at £1000 but high end Bullpups are at that sort of price if not more with certain brands. Decisions, decisions! Safe shooting! - Rack.