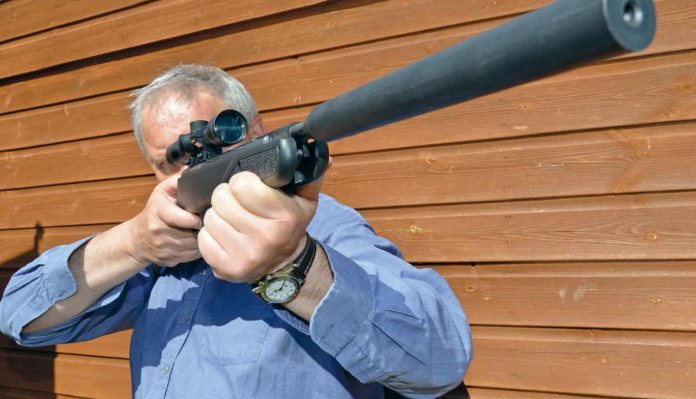 The Remington name is of course legendary in the firearms world, and the range of airguns imported by UK distributor, Sportsmarketing, bearing the famous logo, is now quite extensive. The unusually named Tyrant, is a bold piece of design and for anyone in the market for a great value starter pack, this could well be it.

Sold as an all-in kit, the Tyrant is a conventional, spring/ piston-powered, break-barrel rifle that comes complete with a 4x32 scope and a set of split ring mounts. An ambidextrous black synthetic sporter stock holds the action, whilst a full-length barrel shroud manages to beef up the profile. In addition, we get a 2-stage trigger, in-guard safety catch, rubber butt pad, dovetail rails, and recoil arrestor provision.

OK; we are talking fairly basic function with this model, and that’s largely reflected in the kit price, currently £159.95. Costs, unsurprisingly, are saved along the way, and that means that whilst build quality is reasonable, finish to the metalwork is best described as ‘budget end’. Both the main compression cylinder and barrel are treated to what looks like chemical bluing, yet the finish is fairly matt. Complimenting that is the black matt synthetic shroud which dominates but also elevates the visuals here.

The 4x32 scope supplied, comes with elasticated lens caps to protect the glass when not in use, and fitting to the rifle is pretty straight forward. With the Tyrant ideally sitting in a rest, unscrew both the mount tops and put to one side. As a basic rule, I always try and keep the same ring tops in position, so that exactly the same screws will be going back to the same holes. That may sound a bit OTT, but threads and screws can all vary slightly, and if the screw has a slightly altered thread in the hole, it just can ensure that it tightens up later on, if it goes back in the same place.

Gently fix the mount bases onto the dovetail rail and ensure that the rear unit is the one with the small protruding arrestor stud. Locate it into the arrestor hole in the receiver and tighten the bases in position. Lay the scope in the mounts, and nip up the top rings, gently taking up slack and stop when resistance is felt. Close the eyes, and mount the gun, and see how the image looks. Repeat, and gently move the scope within the mounts, until a full circular picture is achieved. Ensure the cross hair is level, and then gradually tighten all the screws, alternately, as if tightening tyre bolts. Even pressure, spread side to side and back to front, is the idea.

You’ll need a screwdriver to adjust the turrets, but they are clearly marked up, and have simple ¼” clicks, which I tend to favour. Clarity was good with the test scope, and the crosshair, whilst a simple 30/30 design, isn’t too thick. Proportional, equidistant, outer posts and a fine central crosshair, offer more options than may be realized, and as a starter pack, I think it works well.

Cocking my test model, the barrel did need a jolt down to break it open, but thereafter, the actual stroke was pretty easy. One look at that beefy full length shroud, and it’s not hard to see why, given the added leverage it affords. Look to the muzzle and the rifling can be seen just a few millimetres in, so it is definitely a shroud/ cocking aid, rather than a silencer. Use of an articulated linkage means the manufacturer doesn’t have to cut quite such a sizeable hole on the underside of the stock, and that helps looks, rigidity, and feel overall. As for the handling and fit, a more pronounced comb wouldn’t go amiss, but the rounded forend feels good in the aim as does the grip.

The action felt a little under-sprung if I’m honest, to the point where I was expecting the Tyrant to come in under-powered. But no such problem. Several pellet brands came in over 11 ft/lbs, which seemed to be the average kinetic energy overall. Hardly surprising since this is the unwritten industry standard for manufacturers to aim for, allowing for guns to slightly increase over time, (as springers so often do), without too easily straying over the wrong side of legal. Consistency was acceptable too, with the Tyrant’s favoured Air Arms Diabolo Field pellets returning a 10-shot string, all within a total spread of 23fps.

Triggers are always basic on budget end hardware, and the pseudo, 2-stage affair fitted here looked familiar. The instruction leaflet supplied with the Tyrant is surprisingly extensive, and above average in the content included. That said, no mention of adjusting the trigger is covered, instead, it states that the manufacturer’s setting of 3-6lbs, will be best. I’m pleased to say that in reality, the final pull doesn’t feel anywhere near that, once the creep had been pulled through.

Action-wise, my test gun did sound a bit harsh, with what’s best described as a metallic clatter on firing. Overlook the din, and actual recoil isn’t really that bad. Where accuracy is concerned, expect groups of around 1.5”, although I did slightly better that occasionally on test.

Sportsmarketing (SMK), the UK importers, are well known for offering value for money, where their enormous range of airguns are concerned, and the Remington Tyrant is true to that philosophy. It’s a robust, solid performer, with plenty of character. It’s also a great little starter gun, and all ready to go, straight from the box.