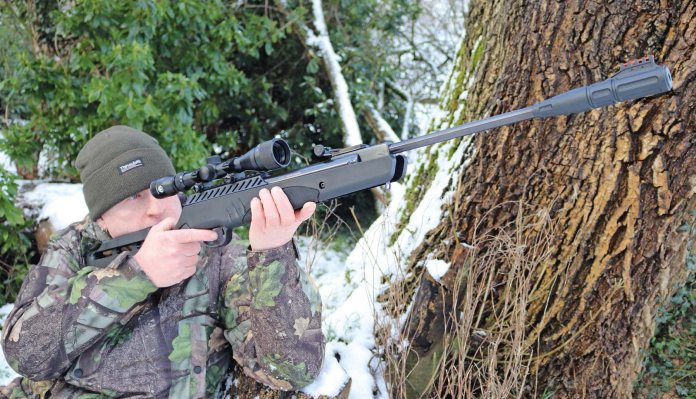 Quite a few years back, I tested a Ruger branded air rifle and if my memory serves correct, I concluded it was at best a basic budgetpriced and non-descript old school springer sporter.

Well, I’m glad to be able to say oh how times have changed as the Ruger Targis Hunter embraces and boldly shows very modern styling and some pretty nifty features. Manufactured under license by Umarex, the bundle includes a quality gas-ram powered air rifle with a 3-9x32 AO scope, 2-piece mounts and a basic sling, giving you a ready to go combo straight from the box.

What’s in a name

As a matter of interest, the rifle’s name is quite a conundrum, but Scrabble fans will no doubt decipher it as an anagram of ‘Gratis’meaning free. However, in more concise literary reference sources I looked to, I did find a phrase that states the word as meaning ‘In a fresh or original manner.’ This certainly suits the very distinctive overall look of the gun, I think that’s not a bad moniker at all.

The ambidextrous black synthetic stock is a very well-considered design and one that oozes features for the shooter to place lead accurately on the target. The butt is best described as having a ventilated comb. I say this because the stock at this position has three elongated and fully recessed vents that pass all the way through the stock material, while the comb itself slopes at a downward angle towards the black rubber butt pad. Even here the rifle deserves credit as the ‘vents’lighten the rifle without sacrificing strength, plus the aggressive outward face of the butt pad is so grippy, that once in the shoulder it’s not going anywhere.

The slim neck is proportionate to the steep drop-down pistol grip, while the lengthy slim forend compliments the aft of the rifle. Umarex has certainly taken user interface into consideration, as the rifle also has raised rubber panels of fine stippling applied to the grip and fore section. There are also lateral and angled recessed ridges moulded into the stock just behind the forward grip panels and pistol grip. These are not only for cosmetic appeal, the three to the rear contact the palm of the shooting hand, helping you acquire a very secure hold. So, even in wet conditions or if using gloves, this is a rifle that will instil confidence in the field, plus it also balances nicely from a variety of shooting positions.

The rifle also has two sling attachment points, one is a standard looking stud under the butt pad while the other is an articulating metal tab with an end loop that’s attached to the metal cocking linkage. While the sling is a basic non-adjustable, plain black Nylon affair for those of an adult build, it’s usable until you decide to upgrade this accessory.

The Targis has a pair of fibre optic enhanced open sights. The layout shows a raised red fibre optic bar foresight and a fully adjustable rear sight with green fibre optic bars flanking the sight notch. They’re easy to use and adjust, plus the stock design allows you to quickly accustom yourself to the sightline and configuration. As with most open sights, keep ranges down to 12 yards or so and they’re as accurate as any of this type. They’re ideal for close range feral pigeon or rat shooting as well as plinking.

In respect of ready to go combo’s, manufacturers or distributors often scrimp on a vital component; the scope. Well, that’s definitely not the case here as the Ruger branded 3-9x32 AO scope is of surprisingly good quality. It features a sensible zoom range, all movable rings operate smoothly and the cover capped finger adjust turrets click very positively to each station. The reticle is a standard thick/thin duplex and it’s one most hunters began with. There’s no denying it’s still a very useful general-purpose design.

Incidentally, scope fitting is catered for by a lengthy run of Weaver/Picatinny rail. This is part of what is another nice cosmetic touch, as below the rail is a stylish vented matt black synthetic air cylinder cover. It serves the purpose of raising the scope rail to the height required for optimum scope eye-alignment. This also shows the stock design to be of a good compromise for shooting the Targis open sighted or with an optic onboard. It’s here you appreciate the downward angled comb as it allows you to move your head forward for scope use (your cheek still in contact with the comb) and when using opens you can still attain a comfortable head position by moving slightly back as the comb drops lower.

The 2-stage trigger mechanism consists of a broad-faced, nicely curved trigger blade with an automatic safety blade in front. A standard set up that’s commonly used on a host of break-barrel airguns. However, as can be the way with some lower price guns, rather than the safety blade just being a small ‘tab’ of metal, Umarex has given the shooter a semi-hard plastic-covered blade that extends down to an optimum level for ease of use. It can effortlessly be pushed forward with the back of your trigger finger to put the rifle into live fire mode or pulled manually back to reset, should you decide to hold off taking a shot for any reason.

At the front of the barrel is what at first you’d be forgiven in presuming is an elaborately designed yet cosmetically stylish muzzle weight, however, in actual fact, it’s a nifty looking sound moderator. This synthetic bodied unit is in itself very modern looking, with what appear to be connected modular compartments. However, it’s constructed from a full outer body shell which houses internal baffles. It does a very fine job of reducing muzzle report and is also the base upon which the raised fibre optic foresight sits. It also doubles up as a very useful cocking aid, not that one is required, as thankfully the Ruger doesn’t have a heavy cocking stroke.

Talking of which, drawing the barrel down and back to cock demonstrates that the Targis has a very smooth cocking stroke, that locks up securely in the open position. Here you can clearly see the détente is held shut by a sprung stainless steel ball-bearing. An older locking design maybe, but on this model, this timeserved mechanism isn’t showing its age, as when the barrel is returned to the closed position it locks back up with a reassuring clunk. Incidentally, at the end of the cocking stroke the rifle’s trigger safety automatically engages, which once again shows that Umarex has put a good deal of thought into the design and manufacture of this particular airgun.

After fitting the scope to the rifle with the mounts supplied, I zeroed it at 25 yards. The Ruger displays traits common to the gas ram power source, which includes a slight nudge in the shoulder upon firing and a low dull thud sound as the piston reaches the end of its travel. As mentioned previously, the moderator performs its duty well, making this rifle very quiet on discharge and one with a firing cycle that you will quickly become accustomed to.

I achieved sub 3/8” groups that did begin to open up when pushing out to 30 yards, so keep range sensible and the Targis Hunter will reliably and consistently deliver the goods.

When it comes to starter or nice-price combos the market is undoubtedly now very well catered for. However, many in the same price point as the Targis are often lacking in more than a few departments.

Not in this case, as Umarex has produced a quality gas ram powered air rifle that will suit many a hunter on a budget. The scope is what I feel makes the combo such a great prospect but credit has to go to the rifle’s very unique and standout stock. Initially, it may look to be just eye candy but the features it boasts are all there for good reason. In use, this translates over to the rifle’s handling, balance, feel in the hold and practicality.

All in all, for the price you are getting a desirable, highly capable hunting rifle and one that performs as good as it looks.