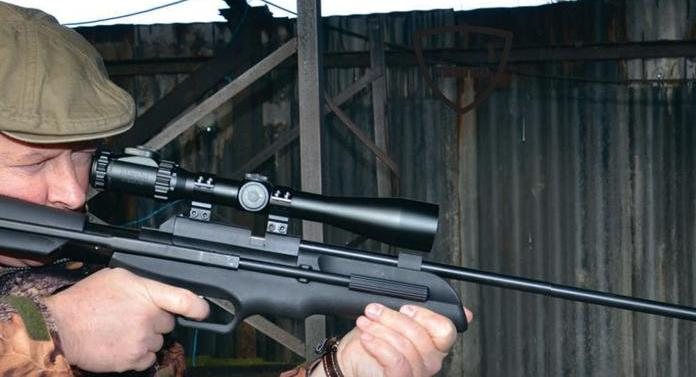 I’ve been intrigued to get hold of the rifle on test here, ever since catching a glimpse of one in SMK’s product listings a while back. Partly due to the looks, but also the specification. For look closely at the SMK Artemis SR900S, and all is not quite what it seems.

For a start, hands up if you thought this rifle was a PCP? With that exposed section of the cylinder at the rear and long uninterrupted barrel up front, you could indeed be forgiven, as the unusual configuration confuses the eye. Indeed, viewed from the left side there’s a little clue this model is actually a sidelever action, spring-powered airgun. Look to the right side, and the long side-mounted cocking arm somewhat gives the game away.

Named after the Greek Goddess of Wildlife and Hunting, the Artemis SR900S is a striking piece of airgun design, and it’s positively laden with features. First and foremost, it’s a multishot springer, which also comes supplied with a single-shot tray. There’s a choice of a brass barrel fitting or silencer, which is all in the box. It shows a 2-stage trigger, safety catch, 2-part synthetic stock with adjustable rear section and even magazine storage in the stock.

So, a multi-shot springer, which is all the rage of late and a trendy option for sure. The SR900S comes supplied with three magazines, and the ones supplied with my test model in .22 calibre had a 7-shot capacity. SMK’s website refers to a 13-shot mag in .177 calibre, and 11-shot in .22 calibre, so specifications are obviously not set in stone. No major issue and the cassette-style mags supplied felt very precise and well made. The design features a metal main body, and even a small magnet that pulls the mag into position, now where have we seen that before?

The process of filling the magazine is simple enough, although the instructions just say ‘fill the mag’! Just twist the clear cover anticlockwise against spring pressure, all the way around. Then drop a pellet skirt first into the one exposed chamber. Now twist the cover round and drop a pellet headfirst into each chamber, in turn, and close flush. Three magazines allow for plenty of backup shots to be held at the ready, and these can be neatly stowed in some recesses found on the forend. One small negative on my test gun was that the mags were a tight fit in the rear stowage point, but hey, I’m nitpicking.

This model features an adjustable rear stock, so with the mags primed, the next bit of prep work is to set the length of pull (LOP) to the desired point. The easiest way to get this right is to place the wellshaped rubber butt pad into the crook of the elbow and see where the pistol grip falls in relation to the palm. If the hand is too far forward, then the length of the stock needs to be increased, and vice versa. Adjustment is simple and instant. Just slacken off the large knurled wheel underneath the cheek, and pull or push on the rear stock. With 2” of adjustment, a properly comfortable, supportive position is on the cards, and it’s a massively valuable feature.

Whilst on the subject of extensions, there’s another choice to be made with this model. You can either fit the neat brass barrel finisher or screw on the sleek aluminium silencer. Either one looks the part, but the silencer will extend the overall length by 4.5” over the brass fitting. However, I’m happy to stick my neck out and say there’s no discernable difference in terms of muzzle report with either! Part of the striking profile of the Artemis SR900S is that whopping great 21.5” barrel, and that means that overall length (taking into account the brass fitting or silencer, and rear stock adjustment), can vary between a reasonably compact 39.25” and a super long 46.25”.

As for mounting a scope, this is a springpowered action as specified, yet it comes with a split dovetail rail spanning the receiver (PCP style) and this precludes the use of a sizeable one-piece mount. An easier option to kill any chance of scope creep would be to fit a small arrestor block just behind one of the mounts, or a compact reach-forward one-piece. Either way will work just fine. The receiver is synthetic incidentally, but everything feels well made.

To cock the action, first, pull the side lever free from its clip, then grip the handle firmly and pull the lever all the way to the rear. An anti-bear trap device means that the lever stays back at different stages as the ratchet keeps a grip, and there’s no problem of crushed fingers here, with only a small loading channel and no exposed breech to worry about. Cocking effort is fair and given as mentioned, you can effectively take a rest halfway, it’s no problem. With the lever fully back, the pellet probe will be retracted and the magazine can then be slid into the action from the left side, locating into its slot. At this point, the magnet pulls it neatly into position. Close the lever, and you’re ready.

If you fancy the singleshot option, then the singleshot tray first needs to be slid into position, again from the left. The procedure here flies in the face of good practice, as once the cocking stroke is complete, the right hand has to let go of the lever and be used to feed a pellet across the loading channel. Close the lever, and the pellet is chambered.

At this point, my main negative has to be aired and it concerns the side-lever. On my test gun, the moulded plastic retaining clip was way too tight, so just pulling the lever clear was fiddly and awkward. No speed shooting here then, and if this was my Artemis, then a small wedge left inside the clip to widen the jaws would be a worthwhile exercise. While I’m niggling, the pushbutton manual safety catch is positioned in the side of the trigger blade, which is hardly safe, although this is a common feature these days.

So, after all the prep work, how does it actually shoot? Well, I’m pleased to say, putting aside the irritating side clip, the performance was pretty impressive. OK, the trigger is not the most sophisticated, but the flat surface of the blade does offset the fairly heavy release. The action on test was slick and quick, with no twang so often associated with spring power. Over the chronograph, RWS Superfields were OK, but consistency massively improved after switching to Air Arms Diabolo Fields. A 9 FPS total spread over 10-shots, made the point. Down range performance did seem slightly better with the single-shot tray fitted, with the SR900S producing some very tidy sub 1/2” groups using the Superfields. So, as always, experiment with different ammo, and do your homework. As for handling, the hollow pistol grip feels great, as does the solid forend and well-shaped cheekpiece for that matter.

Dare to be different

An unusual airgun then. I really like the looks, the dense synthetics of the stock are satisfying, the variable features bring real versatility, and it feels really good to shoot. So yes, if it’s starting to sound like I fell for the SR900S Artemis, you’d be right. Just sort that pesky lever clip!