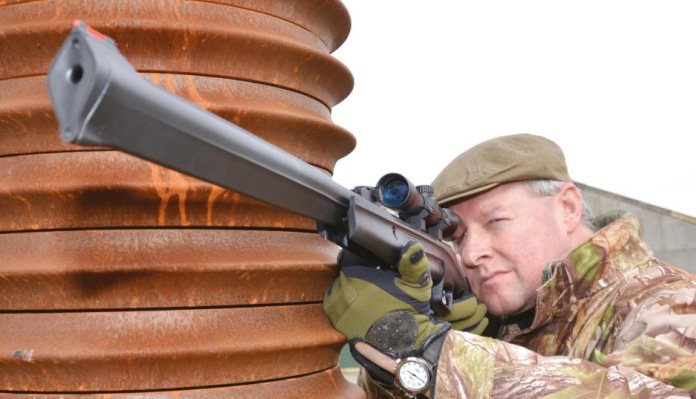 Mark Camoccio gives Stoeger’s new suppressed RX20 the once over Stoeger Airguns are designed in Italy and, as part of the world-famous Beretta group, so have a certain style and flair. At present, the company operates at the cheaper end of the market and, in this somewhat overcrowded sector, brand image is the key.

When they launched their X20 Suppressor model eight years ago, I was struck by its distinctive profile and whilst it could be viewed unfairly as ‘just another sporting springer’, it had such nice lines, it begged to be handled. It had an early version of Stoeger’s Suppressor system on board, but the end result was just a little underwhelming, given the manufacturer’s claims at the time. A nice rifle, just nothing special. Stoeger evolved the design and on test is the latest RX20 S3 Suppressor. It comes bristling with features, all in for a very reasonable £250, so, let’s see how this new model shapes up.

What we have is a full-power, spring-piston driven, sporter, with the latest full-length shroud S3 Suppressor system. Add in fibre optic sights with interchangeable front and adjustable rear units, contoured synthetic stock, featuring interchangeable grip and forend sections, 2-stage trigger, and a Stoeger 4x32 scope with mounts. Their website intriguingly mentions a gas-ram version, although UK importers, GMK, said this model is only available with a spring piston power plant. My tester came in .22, but .1777 is an option.

First impressions are of an ultramodern sporter courtesy of the stylish synthetics, but obviously it’s that rather dramatic, wedge-shaped S3 Suppressor that grabs the eye, giving this model a bull nose, and a less than traditional profile. Pick up the RX20 and at 6.6 lbs un-scoped, it’s a gun you can handle all day, without batting an eyelid. Everything feels solid, surprisingly refined and well put together too.

The precise moulding of the stock puts it way above many rivals, also the pleasing density of the compound, with no discernible hollow areas. Modern airguns need jazzy marketing lingo of course and this model has plenty. ‘Human Tech Design’ is the rather clumsy expression for ergonomics, which is emblazoned over the rear of the compression cylinder.

Pick it up and it has had plenty of thought applied at the concept stage, with the satisfyingly slim pistol grip and that attractive swell of the forend, doing their job admirably. Then, there’s the MGS (Multi Grip System), which consists of interchangeable grip panels of different textures for pistol grip and forend. Colour-coded you get; black with a cross hatched, chequered design, blue with moulded stippling and orange with a fine dotted finish. All easily switched, at the twiddle of an Allen key. Couple this with the moulded raised ‘Pro Adaptive Chequering’, around the grip areas, and the idea is that the grip can be tailored to the conditions or shooter preference. How often anyone will choose to make any switch is debatable, but it’s neatly executed, and adds a fun dimension to the proceedings.

As previously mentioned, this model comes complete with a Stoeger branded 4x32 scope and mounts, and this is easily bolted onto the dovetail rails, once the small arrestor stud on the underside of the rear mount, is first sat in the indent on the receiver. Presumably, the factory had performed a quick zero, as my scope proved to be within a couple of inches at 25yards. A quick dial in and job done! And so to the S3 Suppressor system. That large protrusion underneath the barrel is designed as a decompression chamber according to Stoeger. As the pellet exits the barrel, it then passes through no less than four baffles, and as it does so, spent air is stripped away and sent into the chamber before dissipating. The end result is certainly muffled, with just the ring of the action as the spring and piston complete their cycle. It’s fair to say that silencers of any sort are far more effective in taming the crack of a PCP, but this system does have some ability and effectively reduces the signature from what is, at 14”, a fairly short barrel.

As for the two stage T2 trigger, it’s fairly crude, with the only adjustment being to alter the length of the first stage, testing showed this stayed fairly long at its limit. That said, it’s about par for the course in this price bracket. More positive, is the automatic safety catch, which is perfectly positioned at the rear of the action and can be nudged forward easily with the firing hand thumb. The fibre optic open sights are also spot-on, easily adjustable, and creating a clear, vibrant picture, courtesy of green elements at the rear, and a red up front. Fancy a change though, and that front element is designed to be interchangeable. Just remove the shroud and the small foresight tray can be slid out, to be replaced with a yellow dot.

Cocking is astonishingly easy, and that shrouded Suppressor assembly just makes the whole task that bit more comfortable too, as it’s long enough to act as an aid. Chronograph testing revealed an extremely consistent power plant, and fairly stable with a variety of ammo. Air Arms Diabolo Field pellets produced an average of 11 ft/lbs, and just 8 fps total velocity spread, over a 10-shot string, whilst Webley Mosquitos still posted a spread of just 13 fps, and almost identical energy.

Accuracy was nothing fantastic however, with groups of around 1.5” over 25yards, the norm, with the occasional flyer for the record. Remember the price tag though, and it would perhaps be unreasonable to be too demanding. For what we do have here is a highly attractive, extremely shootable rifle, that just feels right in the aim.

Innovation, technology and style are the three principles behind this eye-catching model, according to the manufacturers, with the additional remit apparently to ‘convey new emotions’. Blimey; let’s not get carried away! Realistic capabilities make it suitable as a budget starter pack, and it’s certainly a model easily manageable by most.

Sales blurb aside, the RX20 S3 Suppressor does handle really well, and has a raft of design features to jazz up the time honoured spring gun concept. Not quite the ‘Ultimate Air Rifle’, as one bold advert claims, but a very enjoyable budget springer, nonetheless.