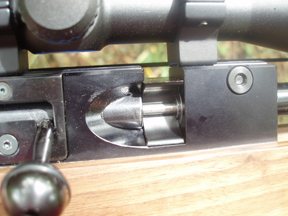 I can remember going to a CLA Game Fair in Wales many, many moons ago, and seeing my first Rapid 7 (as it was called then) being exhibited by Ben Taylor and Dave Theobold of Theoben Engineering. Like the Theoben gas-ram rifles that preceded it, the Rapid 7 was truly revolutionary, with at least two remarkable developments – a detachable, refillable ‘buddy-bottle’ air source and a working 7 shot magazine system. There had been many attempts at airgun magazines before, but this was the most commercially viable one that I had seen. To make this scene even more remarkable, was that Theoben’s stand was right alongside one that was displaying the ‘Colchester Game Keeper’ rifle, which was considered quite state-of-the-art up until then… But at this show it looked a decidedly poor relation when compared to the Theoben Rapid 7 – like a Fiat up against a Ferrari… no contest!

The Rapid 7 dominated the precharged pneumatic hunting rifle scene for sometime, before being caught up by other manufacturers, and even though Theoben constantly updated their multi-shot buddy bottle PCP concept with new ‘improved’ models, the old Rapid 7 continued to be a consistently good seller over the years. Even when a regulated high air capacity Rapid Mk II came out, the Rapid 7 continued to sell, but was now renamed the Rapid Mk1.

They say old soldiers never die, and it seems that Theoben have no intentions of letting the Rapid Mk1 fade away, and they’ve just sent us a new upgraded 2007 version of this legendary rifle.

This has always been a well respected and popular rifle, and the latest version comes with many new features as standard. The first of these is the ambidextrous walnut stock with chequered pistol grip which should give a comfortable fit for most shooters. To be fair, Theoben have always seemed to source practical stocks for their rifles, but the big differences here are that it balances well and it looks good too.

Probably the most noticable improvement is the fitting of a Mk 4 Match Grade Trigger as standard. In the past I’ve never been a fan of Theoben triggers – even their best ones – but for me this upgrade absolutely transforms the firing cycle of the rifle. There’s no getting away from the fact that the trigger is the most vital link between shooter and rifle, so if you shot well with a standard Theoben trigger unit, you’ll shoot a darn sight better with this one.

A major difference between the MkI and MkII Rapids is that the MkI retains the 280cc buddy bottle while the MkII goes for the 400cc version. Nevertheless, if you want higher capacity for your MkI, you can have a 400cc bottle as an optional extra – so that should keep everybody happy. Likewise you can order your MkI with a regulator fitted… but then if you are having all these features added, you might want to opt for a Rapid MkII instead!

Other new features on the MkI include a new high efficient inlet adaptor, a scalloped action and single shot tray for single pellet feed if required, and last but not least, a larger bolt handle.

Specifically designed for hunting use, this bolt action PCP is available in .177, .20 and .22 calibres and will give close on 12ft/lbs of muzzle energy. Depending on the calibre chosen, the latest Rapid Mk1 will accept a 17 shot magazine in .177, 7 or 12 shot magazine in .22 calibre, or a 12 shot in .20. The test model came with a single shot loading tray which I found OK to use, in fact I prefer it to a magazine, but others that tried it preferred taken it out and just loading direct into the barrel you couldn’t easily do with earlier MkIs.

The upgraded MK4 two stage trigger gives match performance, complementing the recoilless action to give superb accuracy potential. Just how good this potential is can be judged by the rifle’s performance at ETL FT shooting ground, where Brett Wilkinson consistently hit a 12mm reset disc at 55 yards – yes you read that right, just 12mm… that’s ½” in old money, although he cheated by bench resting the rifle…

There are plenty of Theoben fans at ETL, so I asked what they thought still made the Rapid MkI so popular with hunters, even though much more sophisticated Theobens are available. The answer was simple; the Rapid MkI is virtually bombproof, fairly unsophisticated (less to go wrong) and extremely reliable – all you could want for a hunting tool. One of the older club members, Don, who was installed on the plinking range on opening day and has been there ever since, has put an estimated 300,000 pellets through his Rapid, only occassionally having to change seals and a hammer spring – not bad, huh?

The new Rapid Mk1 is fairly compact at just under 40” in length, while the lighter 280cc bottle helps keep the weight down to under 3kilos. The test gun was supplied with a Vortex silencer, which certainly kept the muzzle quiet, but you can opt for an Evolution moderator, or no moderator at all if you so wish.

Other optional extras are a regulator for even more consistent performance, a larger 400cc buddy bottle for a higher shot capacity, sling swivels, gun bag, 12ltr air bottle and decanting kit, and much more. The new 2007 Rapid Mk1 price starts at around £655 (without moderator) and is available from most good gunshops.