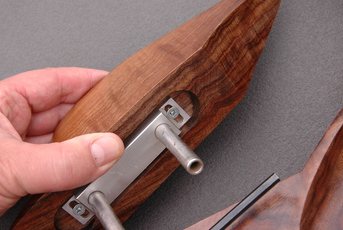 Theoben Engineering have come a long way since their ground breaking work with the gas-ram system back in the 1980’s, and their recent move to bigger premises is testament indeed to the popularity of this premium British brand.

Having spoken to Darren Godfrey recently (who took over as head of Theoben’s UK operation a while back), it’s clear that burgeoning order books across the range have dictated the pace with regards to the factory expansion - all good news; especially given the current economic climate.

That most enlightening conversation with Darren covered many aspects of the business, but a round up of the current models available soon stopped me in my tracks. You see, one rifle that really hasn’t received the coverage it deserves is the Vanquish - to the point where, to be honest, I thought the company had dropped the idea.

As it turns out, this misapprehension is partly due to a lack of hard sell at the factory themselves; with a steady flow of sales from customers in the know, suiting the company just fine. ‘Limited’ to ‘no’ advertising is a curious way to promote a product, so my confusion concerning the Vanquish is wholly understandable; yet with continuous sales of more familiar favourites all helping to push production levels to near capacity, expansion of the business was the logical way forward.

The new move for the company may well see the Vanquish at last given a proper share of the limelight, and having now got my eager hands on one, all I can say is it’s one impressive airgun.

Originally billed as a limited production run special, complete with striking (Gary Cane designed) laminate woodwork, the Vanquish was seemingly something of a testbed and showcase for just what Theoben were capable of - on an engineering and technological level.

Now, as a full blown production rifle, this model is fitted with an equally striking stock, although the company have dispensed with laminate, in favour of a slab of superbly figured American Walnut. Slab it is too, with the dimensions of the Vanquish, and its stock in particular, of outsized proportions; but whilst the profile now has less of a sweep to the underside of the fore-end, the overall configuration is still mouth watering.

Big, bold and beautiful are epithets that just spring to mind when contemplating the virtues of this ‘mega’ rifle; but beauty as they say, is only skin deep - and the Vanquish is far more than just exterior gloss.

What lies at the heart of this beast is the power plant from Theoben’s popular Rapid MFR, so the Vanquish is ostensibly a bolt action, fully regulated pre-charged pneumatic, with single or multi shot capacity, and a host of other features which we’ll cover in turn.

The first key point to note concerns the weight, which at around 10.8lbs is significant. Bear in mind that this heft comes before any glassware enters the equation, and it’s clear that the Vanquish is strictly in target rifle territory.

Back to that glorious woodwork, and Theoben have stuck with their ethos of promoting British engineering and manufacture at its best, with their stocks (including this one) being sourced from Sheffield based Custom Stock. The all encompassing design is a ‘strictly no compromise’, dedicated right hand configuration, offering the option of the full thumb hole grip (complete with generous thumb and finger shelves). The full 90 degree drop down grip includes contoured finger recesses, with all the hand contact area treated to neatly applied stippling.

A broad finish to the bottom of the pistol grip acts as a palm shelf, whilst the pièce de résistance comes with the provision of a fully scalloped thumb shelf to the rear. But the spec hardly ends there!

The over sized forend continues much further forward than many rivals, and with that ultra deep section just forward of the trigger, the over-arm or off knee FT stances are really well catered for. A 5.5inch long accessory rail is recessed into the underside of the fore-end, allowing for a bipod to be fitted; whilst ventilation slots add further detail at the front.

The full target specification includes an adjustable but pad, and a fully adjustable cheek piece. The latter is adjusted for height by simply slackening off the large allen bolt on the reverse side, whilst lateral setting is possible by pulling the cheek section completely from its housing, and fine adjusting the two hidden screws on the underside. All in all then, a comprehensive design to satisfy the most demanding shooters among us.

Theoben have always been renowned for the quality of their chemical bluing, and the finish to all the metalwork on the Vanquish is well up to their elevated standard, with a satisfyingly rich lustre throughout.

One of the many features that gives this model the edge over others in the range, is the fact that the rifle comes fitted with a conventional slim-line main air cylinder instead of the company’s trademark buddy bottle arrangement. The advantage, to my way of thinking, is twofold. Firstly, the shooter doesn’t have to place a supporting arm on the cold steel of a buddy bottle, instead of a wooden fore-end (which must be hell on a cold winter day!) and secondly, the cylinder comes complete with a quick fill system.

On the latter point, a Foster coupler, i.e. a Daystate style bayonet adaptor - dispenses at a stroke, with the uncivilized need to remove a buddy bottle, just to allow charging to take place. The Vanquish’s on board 180cc cylinder can now be charged to the tune of 200bar in situ. Just unscrew the front cap, and you are away. Incidentally, the on board pressure gauge (manometer) permanently shows the regulator pressure.

Of course, arguably the most striking feature of this rifle comes with that full length barrel shroud, housing a 19inch barrel. The design sees the barrel open out to a large void, followed by Evolution baffles, with the end result that the muzzle report is impressively muted.

The chunky breech block is straight from the standard Theoben parts bin - but that’s a good thing… for its operation and function all come together in a superbly robust design. The .177 calibre means a 17 shot magazine is part of the deal, but for shooters who favour more of a relaxed, deliberate approach, a snap-in single shot tray insert is provided.

And finally, the icing on the cake comes with Theoben’s now highly regarded mk4 match trigger unit, which in operation has a nicely predictable, clean feel, along with an impressively light breaking point.

So How Does It Shoot?

Rarely have I been so eager to get down to proper evaluation with a rifle, as I was with the Vanquish.

Power checking the full shot cycle from the recommended 200bar fill was the first task, and the final stats from my test showed 135 shots available within 26fps. Maybe the velocity spread was a little higher than expected, yet the rifle was shot with Daystate Li pellets taken straight from the tin, where a certain amount of dirt seemed to be present.

As is so often the case, accuracy cares little for chronograph readings down range, and the Vanquish proved to be an incredibly potent tool with a variety of ammunition; even when a casual approach was adopted. Pride of ownership is a key factor for many, and with execution and finish of the woodwork exemplary on the test model, I was reminded of the pleasures to be gleaned from fully customized furniture. That hand grip in particular just felt perfect, and effortless tight groups followed, helped in no small part, by the snap glass match trigger. Many rifles demand high input from the shooter to extract the best. This gem from Theoben just felt inherently accurate - which breeds confidence from the start. Quarter inch groups at 35yds and half inch at 50yds with both JSB and Daystate Li are text book results which really speak for themselves.

The Vanquish, certainly at the best part of £1400, is something of a flagship for Theoben. Yes of course it’s a heavy weight, limiting its appeal and application for some, but for those who appreciate full sized adult airguns, this piece of stunning British made machinery demands respect. It simply exudes class, and with superb accuracy easy to come by, to match those eye-pleasing lines, any task should be in its remit including Field Target work.

Truly a specialist rifle then, one for the connoisseur.