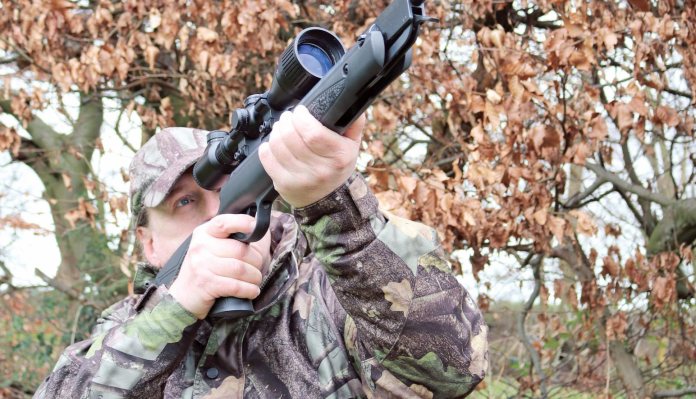 There’s no disputing the fact that German gun manufacturing giants, Walther, have gone from strength to strength in a relatively short space of time, during which they’ve established a solid and growing roster of spring and piston powered air rifles. Little wonder when you consider the quality of the ‘core’ rifles they’ve launched – namely the LGV break-barrel and LGU under-lever action models. Both of which boast integral highly efficient performance enhancing attributes such as a Vibration Reduction System and the use of what they term Super Silent Technology. Both those systems deserve praise simply because they work and not surprisingly the rifles were quickly embraced by the airgun fraternity.

Not content to rest on their laurels the company has steadily introduced more quality springers with one standing out due to it lasting longer on the roster than most as it was a very popular seller – that being the Walther Century GT. Although that’s now been discontinued, it makes way for the rifle that’s based on it – the Walther Century Varmint. A thumbhole synthetic stocked hunter biased springer that’s no slouch in either the looks or performance department.

From the very start

First impressions leave you in no doubt this is a very cosmetically appealing and stylish looking rifle, while closer inspection shows just how well-engineered the action is and quite frankly the high lustre finish of the metalwork is flawless. But looks don’t bag quarry, so let’s start with the livery the high-quality action sits in, that of course being the ergonomic, modern and very practical synthetic stock.

The Varmint’s thumbhole ambidextrous stock boasts a deceptively high well-defined cheekpiece with a nicely curved thick black ventilated rubber buttpad. The pad’s contoured rear sits in the shoulder solidly and very comfortably while your head naturally positions on the cheekpiece for scope use.

The oversize thumbhole has a very slim neck which also features indents in the moulding to allow for a thumb over hold, if preferred, to the more inviting thumb thru’. The recessing, or idents as I’ve termed them, also appear along either side of the stock between the thumbhole and the integral trigger guard. This allows your forefinger to be almost guided towards the trigger with unhindered access.

The steep drop-down pistol grip has a contoured forward face and the palm swell shows itself very useful as the stock is otherwise quite slim. The forend is equally slim with a nicely rounded underside and is proportionately very well suited to the rest of the bodywork.

Walther once again use their trademark and now familiar multi-directional patterning to aid grip. This is generously positioned at both the key grip areas fore and aft. Here they can be seen as large panels set either side of the pistol grip and two panels are set along either side of the forend. However, due to the stock having such an inherent ‘non-slip’ feel this is a rifle that really does show its all-weather usefulness.

An interesting and unique feature that’s found on certain other Walther breakbarrel action air rifles past and present is the fact the barrel is held ‘doubly’ secure at the breech, due to an underslung barrel release lever. Only when this fail safe is manually disengaged – which is achieved by pushing/ pressing it up towards the barrel, can the breech be opened. When we first saw this mechanism on their rifles Walther named it the ‘formfit and force fit barrel locking mechanism’. Quite a grandiose denotation but one that serves to highlight the level of manufacture and attention the company has installed into the build at what is a key area of any break-barrel action air rifle. Although it isn’t a feature the majority of UK airgunners are familiar with, you do quickly get the knack of its operation. This is helped due to the positioning of the well-sized and proportioned paddle headed lever that can clearly be seen where it leaves the breechblock at an approximate 45-degree downward facing angle.

For ease and comfort in use, the manufacturers have seen fit to apply ridging to the underside of the front section of this paddle headed lever to ensure no slippage during operation.

The optimum way to operate the lever is with the thumb of your leading hand while holding the barrel with your fingers towards the breech area. When pushed upward the lever then trips a lock at the breech which allows virtual effortlessly opening and once the détente is unlocked the lever simply returns back to its original position under a system that uses some method of spring tensioning. Then the modus operendi for cocking is to slide your hand forward to grip the stylish vented muzzle break and then to draw the 15.5-inch Lothar Walther tube back whereupon it locks securely in the open position for direct pellet loading.

Not only does the muzzle break make a handy cocking aid, more importantly it protects the ½-inch UNF screw cut muzzle. A necessary addition for the hunters amongst us who decide to fit a can up-front.

Incidentally, upon cocking, the rifle engages the trigger’s rear positioned auto-safety. Now if you’re a shooter who dislikes this type of safety on a mechanical action air rifle because it leaves you with a rifle locked in the cocked position, note that the rifle (like many others with auto-safety’s) can easily be de-cocked by once again drawing the barrel down and holding the barrel in its fully cocked position. With the barrel still held in position you can then disengage the safety and squeeze the trigger which will allow you to return the barrel under control back to its original closed position and also to its decocked status. Incidentally, the cocking stroke is very smooth and quiet due to the cocking rod moving within synthetic guide rails.

Now, while the original Walther Century rifle used to come bundled with a good quality fixed magnification parallax adjustable scope, so as to be in-keeping with distributors JRW, I opted to fit a Richter Optik 3 – 9 x 50AOE. Scope positioning is made easy due to the rifle having a lengthy run of deep-cut dovetails plus it features an arrestor hole for the rear scope mount. In some instances, you’d be forgiven in thinking this a case of slightly over-scoping, but in lieu of the rifle’s lack of weight this optic added a tad more stability in the hold. As it also needed to be affixed in high mounts, due to the stock design, I was pleased to note it was already in an ideal position to give me full and proper eye-scope alignment without any faffing around.

After setting a 25- yard zero, I quickly began producing sub-¾-inch groups at this range and like other Walther rifles I’ve tested it didn’t seem to be pellet fussy in the slightest.

The adjustable trigger unit with auto-safety is now termed the XT-Trigger. This is still only adjustable for length of first stage travel, so although it’s not the most versatile unit in use I’m pleased to report it releases shots cleanly and very predictably. In fact, the whole unit is very reminiscent in layout to the mechanism fitted to the Walther LGU. That being a broad, well-curved trigger blade is responsible for tripping the sears, while the rear position autosafety slide catch is ideally positioned for ‘thumbing off’ (pushing forward) without you having to alter your hold at the grip. It can also, of course, be slid back at any time to put on safe if you decide to hold fire.

The Century Varmint shows little recoil, but its muzzle report is of a level familiar to the majority of springers in this price bracket. For one shot potters I’d say it’s not overly disturbing but try a compact can such as the Umarex K3 and, to a certain extent, it’ll quieten things down a touch plus act as a much more useful cocking aid.

However, even though I did shoot it with a small selection of my favoured cans spun up-front, many hunters such as myself will see the rifle as a generalpurpose all-rounder. In that respect I would think few will feel it in need of one. And, in my opinion, this is a plus point, because at 43.3-inches from nose to tip this desirable Varmint sporter is already what we’d term full-length. But having said that, the rifle is so well-proportioned it feels much shorter, is very manageable in the hold used in and from a variety of shooting positions.

To sum up I’ve no hesitation in saying the Walther Century Varmint has impressed me in many ways. However, I shouldn’t have expected it not to as the company have now established a fine pedigree. It’s very well-built, the metalwork has a superb finish, it’s accurate and has the solid dependable feel that befits an air rifle designed to handle the rigours an all-weather general-purpose workhorse such as this will be subjected to in the field. In fact, it’s an ideal rifle for those new to the sport due to its reliability, solid secure safety features, lightweight and of course its overall performance.