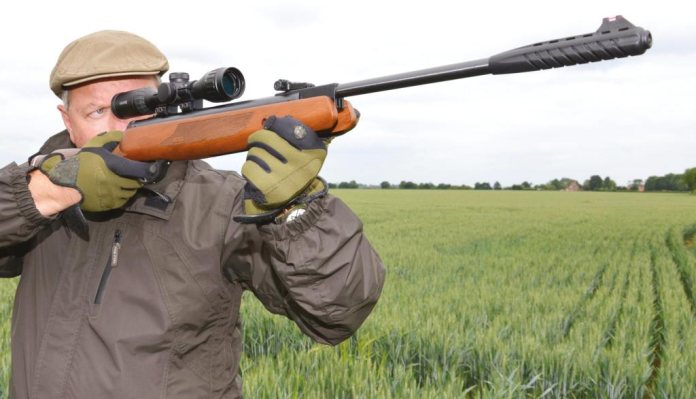 I’ve enjoyed and appreciated a great many airguns over the last few decades and been lucky enough to shoot and own some of the very best examples available. And pushing performance to the absolute limit can be very satisfying for those of us obsessed with competition shooting. But sometimes, it can be a breath of fresh air just to relax and grab a simple sporter, a tin of pellets, and take to the range for the sheer fun of it.

The humble, break-barrel style of spring piston air rifle really takes some beating in this scenario, and under the spotlight here is one of the brand-new models from Webleythe VMX Classic. I first saw it alongside its scaled down junior version, the VMX Cub, at the British Shooting Show, held at the NEC, and something about the styling drew me to it. Having now spent some time properly evaluating just what’s on offer, I have to say I am genuinely impressed. So, let’s see how the Classic shaped up, and just what you can expect for the asking price?

The profile is smart and purposeful, and first impressions are of a compact and solid little sporter. Pick it up and it feels well put together and finished. OK; the chemically blued barrel and cylinder are a little basic, but overall is still well presented. Plastic is used for the trigger guard, safety catch and muzzle cocking aid assembly, yet they are all sufficiently well moulded, as to not detract from the overall feel of a gun that’s built to last. It’s reassuring to see the tension bolt at the breech, designed to take up any play and allow for wear, further down the line. Great attention to detail, and a measure of the thought that’s gone into the design. This model is available with a moulded polymer stock, and a wooden option.

Specified as hardwood, on my test model it initially fooled me into thinking it maybe walnut. Either way, the configuration is smart and functional. I like the angular, tapered forend and the chequered panels sporting the Webley name. But there’s no doubt that cheek-piece could do with being slightly higher and wider, for better support with a scope. As it stands, it’s fine for the open sights and I love the look of the traditional hunting red butt pad!

As mentioned, the VMX Classic comes fitted with very usable fibre optic open sights, and these provide a good clear picture. The fully adjustable rear unit features finger wheels and is nice and precise, and I’d always recommend using the ‘irons’ initially, just to get a feel of the rifle and appreciate the basics. Of course, it’s always tempting to fit glassware, and in that regard, the Classic comes pre-fitted with an arrestor block. Just sit the rear mount right up to the block, and scope creep shouldn’t be an issue. The rails are a little short on this model, so that needs to be taken into account with the size of scope and mounts used, but location is positive. I opted for a Hawke Airmax 2-7x32, which is a wonderfully compact little optic, and perfectly complements the VMX Classic; and with the glassware firmly locked in place, it was time to get started.

Cocking the action is fairly easy, especially with a positive downwards stroke. Push the pellet home flush in the chamber, and snap the barrel closed. That front plastic muzzle grip is comfortable enough, but avoiding the foresight is slightly irritating, and easily remedied by extending the plastic section of the grip by a couple of inches. The automatic safety catch is reminiscent of Webley’s Omega model, and just needs nudging forwards. As for the trigger, it’s full of creep, but reasonably light, and as such, is way better than many rivals in this price sector.

This model comes fitted with the Venom-inspired Powr-Lok mainspring, and the action on firing feels very quick, with little internal twang. That said, it is pretty noisy. However, after a familiarisation session and some careful tripping through the creep in the trigger, my groups, shot from the over-arm FT position, began to improve, and they were reasonable to start!

14mm centre-to-centre with Webley Accupell, and 18mm with Mosquito Express, both shot over 25 yards, were a very respectable start, but when I switched to the ubiquitous JSB made Air Arms Diabolo Field, groups closed to just 8mm; excellent stuff. I had to work for it and do my bit, but the VMX Classic was clearly going to reward my efforts, which is always pleasing.

Back to the future

I’ve always had a soft spot for Webley, since that classic old 1979 Vulcan gave me a gateway into the sport, and this latest VMX Classic is really an evolution of the speciesand damn good it is too. If my test rifle is anything to go by, this model has to be seen as not only terrific value for money, but a worthy addition to the Webley line-up and well up to hunting duties, and an ideal all-rounder, for novice or expert alike.