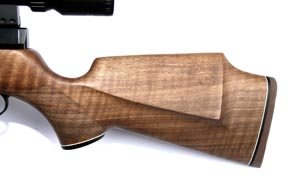 When the first variant of the Weihrauch HW100 PCP was launched in the UK it caused quite a few raised eyebrows. Initially the rifle only came in one stock variant, could only be filled by detaching the air reservoir and surprised us all by its then ‘un-traditional’ side-lever cocking mechanism. Well things have certainly moved on as many other rifles now use this cocking arrangement and without a doubt the HW100 helped the UK shooters accept the side-lever for priming and transferring the pellet into the barrel.

Models are designated ‘100T’ or ‘100S’, both having carbine size counterparts but it’s the letters in the name that denote the two stock types. The full length sporter here on test being the ‘S’ version while the target thumbhole stock obviously being given a ‘T.’

The walnut Bavarian style stock is quite substantial with a well-defined angular cheekpiece and full rubber butt pad. The pistol grip, though having a slim neck, is quite chunky and fist filling yet has been deeply scalloped on the right for the heel of the shooting hand, allowing a very comfortable hold.

The well-cut chequering consists of four panels set either side of the grip in two sections, the theme being carried forward to the forend. However, it’s practical as well as attractive, aiding grip in wet conditions or when wearing gloves. Maple spacers are now found at the rosewood pistol grip end cap and the rubber butt pad.

The forend has changed from the original sporter as it’s now got a much deeper, flat-sided rounded underside profile, finishing in a relatively stark angular tip. This combination of chunky rear section with an almost target style forend combine to allow the rifle to feel very solid in the shoulder and on aim.

The air reservoir is still detachable but now due to a quick fill point at the front can be filled on or off the rifle. The recommended fill of 200bar gives 120+ full power shots in .22 calibre and approximately 110 on the .177 calibre rifle here on test.

The air gauge or ‘manometer’ as Weihrauch term it sits on the very end of the air reservoir and
it’s recommended when the needle drops into the yellow at 90-bar that it’s time for a fill so the self-regulating knock open valve can work to its optimum performance.

As well as rifle, silencer and air reservoir, the full package now includes brass fill adaptor, brass cover for the air reservoir to protect threads and prevent leakage during ‘off rifle transportation’ and two 14-shot magazines. However, there is a little optional extra that will be very interesting to HFT participants – a competition this rifle just begs to take part in. This is an optional single-shot clip. This simply slips into the action in place of the magazine for those who prefer to feed in the ammo shot for shot. Once in situ, and a pellet is fired, pulling back the cocking lever allows the ‘clip’ to spring out to the right to be loaded with another pellet rather than the cocking process indexing a magazine around to the next station. The clip can then be pushed back into the action. Return the side-lever to its forward original position and you’ve another pellet loaded.

When using the fourteen shot magazine, you need to fill it with pellets before loading into the rifle. This is accomplished by first cocking the action by pulling the side-lever fully rearward; you then slide back the magazine retaining catch (which also secures the auto-load single shot clip when used) found on the right of the action block just behind the magazine/clip housing; the magazine can then be lifted from the action. All fourteen chambers of the magazine are then filled with pellets and then replace the magazine into the action (the magazine retaining catch will lock on automatically) and return the side-lever to seat a pellet into the barrel. One of the great things about the Weihrauch magazine is that the system will not allow you to load two pellets into the barrel at once – something that many of us have done by mistake with other multi-shot air rifles.

The HW100S uses a 16.5-inch Weihrauch made barrel. Top quality and super strong it’s semi-floating for accuracy and is guided up along the air reservoir to be held and secured at the front by a barrel band. The band has a synthetic O - ring that protects the barrel from knocks, adds extra strength but doesn’t effect the semi-floating nature, therefore accuracy is kept to the highest possible level. On the new HW100 it will be noted the barrel is now threaded at the muzzle to accept a standard ½” UNF screw on silencer. You can fit a ‘can’ of your own choosing but the new Weihrauch ‘High Efficiency Silencer’ has proven to really live up to its name.

The rifle’s 2-stage fully adjustable match grade trigger mechanism with manual safety is a superb unit. The original polished alloy trigger blade has now been replaced with a black anodised one but is still ergonomically curved allowing a very comfortable ‘finger fit.’
The manual, re-settable trigger safety lever operates very positively and is positioned on the right and at the rear of the action block. Push forward and you put the rifle into live fire mode indicated by a red dot clearly visible on the action block. Pulling it back puts the rifle on safe, whereupon you can clearly see a white dot on the action. Incidentally, the safety can only be operated and indeed only functions when the rifle is primed.

The lengthy action block is sensibly machined with lengthy scope rails so fitting optics is a doddle. There’s no problems fitting long scopes or big objective models as long as you use the correct mounts. For test I fitted a Hawke 6 – 24 X 50AO IR SR12 IR Nite-Eye and after zeroing at 30yds, upon squeezing off the first few shots from the HW100 I was again impressed with the whole ‘experience’ shooting a rifle of this class offers. This time around I did notice that the handling was absolutely rock solid - though it felt quite hefty with the extra weight of the large scope and silencer onboard. At 30yds shooting bench rested, the HW100S will produce the much sought after one-hole groups. It isn’t pellet fussy and most quality brands will give results that far outshoot the shooter…

This is an absolutely stunning air rifle – no question about that - and the overall feel and performance of the HW100S is remarkable.