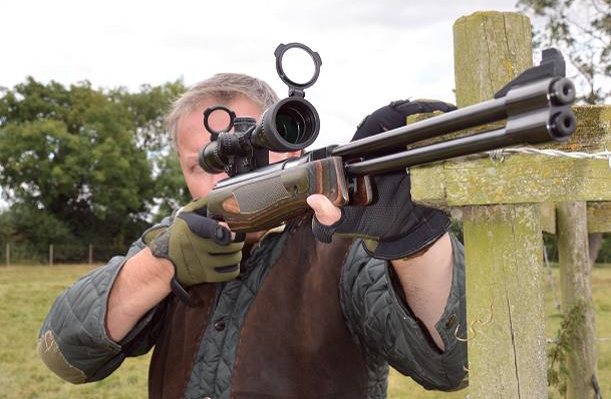 In Weihrauch’s catalogue, when it reached the HW77 the description used to state “The one that started it all”, and these profound words sum it up nicely, for the HW77 was indeed a historic game-changer.

At a time when Field Target Shooting was still in its relative infancy, I and others like me were competing week in, week out with highly tuned break-barrel spring guns. These models, such as the FWB Sport, and Anschutz 335, were highly effective, but over time, and with heavy usage, the breech jaws at the heart of the break barrel system could wear. Small changes in zero, and other curious anomalies would set the mind racing down the path of cause and effect.

So when Weihrauch’s fixed barrel and under-lever cocking HW77 finally hit the market (around 1985, if my memory serves me correctly), us rabid FT types lapped it up. Successful shooting is all about peace of mind and confidence in one’s equipment, and whilst today’s ever more sophisticated manufacturing techniques have improved the situation – certainly at the top-end of the market, there’s nothing better than fixed-barrel accuracy to put a smug grin on the face.

On test here is a Special Edition model of the HW77, and it really is quite a stunner. Okay, those radical looks may just be a step too far for many a traditionalist, but for discerning airgun shooters that appreciate fine engineering and slickly finished woodwork, this green laminate stocked version just can’t be ignored.

Based on the carbine action of this famous German thoroughbred, the Green Laminate Sporter stock inevitably grabs the attention. For those who do find the distinctive looks appealing, the superior properties of laminate – when compared to conventional timber – are a major asset.

The stock blank is first formed from several layers of pre-stained or coloured wood then bonded tightly together. The resultant blank made in this way is far stronger than conventional wood, and as the stock shape is cut different colours are revealed as a different layer is exposed. Sealed with a thick water-repelling varnish, the end result is not only stunning, but the most stable form of wood, resistant to warping through extreme temperature change. It has all the benefits of an artificial compound stock, yet still fashioned from wood. One possible downside though, depending upon your physical state, is the overall weight, since laminate is also extremely dense. That said, physics dictates that recoil generated from a spring powered airgun, is more effectively absorbed by sheer mass – in other words, the heavier the gun, the less felt recoil.

As previously mentioned, this model is based on the carbine action, and that means a relatively short 14.5 inch barrel. The under-lever configuration gives the HW77 a distinct over and under look, yet with the classic sliding breech, Rekord trigger, and Weihrauch features throughout, the profile is actually reassuringly familiar.

The standard model has now been treated to a stock revision, and with the wavy profile now cheekily similar to that of Air Arms’ TX200, the circle of imitation is perhaps complete. Yes, it is the best form of flattery, and the original HW77 blueprint had many a manufacturer double-taking and rushing to the drawing board!

The sheer no-nonsense robustness of the mechanics, are what keeps this rifle at the top of modern spring gun design. Build-quality is typical Weihrauch, and despite a few lapses with shallower checkering, for example, machining, fit and finish are still pretty darned impressive. All the metalwork on my test gun was well-polished, and chemically blued to a highstandard; only spoilt, and I’ll continue to mention it, by that piece of corporate vandalism on the left rear side of the cylinder. Safety instructions actually stamped into the metalwork still bugs me on such a quality adult tool… Okay, I’ll leave it there.

Anyone purchasing this model and not fitting a scope to it should of course have their head examined, yet the chance to play with traditional open sights is always welcome; especially when they are of such fine-quality. All-metal construction is a good start, as are fully adjustable finger wheels on the rear sight – but an adjustable notch plate, giving four options, is a really nice touch. One additional point to note is that the rear sight can be unscrewed and re-positioned anywhere along the dovetail rails, meaning a super long sightline is available if desired.

Trigger-wise, Weihrauchs Rekord unit gets taken for granted these days, but as the industry benchmark for a sporting trigger for so long, it still takes pride of place. Consider that many low-end springers have trigger mechanism’s comprising of two sears and the blade, against the Rekord unit’s cassette containing around 18 separate components, and it comes as no surprise that it lead the way for so long. It still does the business too, but many others have caught up.

Good As It Looks?

A weight of 9.2lbs is indeed significant, so the serious adult label applies here. If the weight is no stumbling block, however, then let’s proceed to the business-end of the test.

Weihrauch’s ambidextrous stock still manages a pronounced cheekpiece and comfortable grip, and this model certainly handles well. To cock the action, the dummy barrel end that acts as a button is pressed at the muzzle and the lever is released. Cocking effort is always a consideration, and having owned four different versions of the HW77 over the years, for the record, all mine were always ordered in full-length barrel spec, where the sheer extra leverage would assure a mechanical advantage to prime the action. Given the short under-lever on offer here, with this carbine length Special Edition model, I was therefore pleasantly surprised to find a very easy, smooth cocking stroke. Chambering a pellet is easy too, with the fully relieved breech mouth, allowing easier access than those earlier models, along with a machined taper into the breech. Whilst this does eliminate much of the ‘feel’ of the pellet entering the rifling, it does allow for ammo to be easily pushed fully flush to avoid deformation.

I’ll normally run a10 shot string over the chronograph, with a few brands of pellet, and widen this if anomalies occur. I would hazard a guess that Weihrauch set this model up using JSBs, however, since my Air Arms Diabolo Fields posted near textbook figures. An average velocity of 787fps with a 12fps total spread, and energy of 11.6ftlbs, is just what the doctor ordered.

Shooting from my muchfavoured over-the-arm, FT sitting position and using a padded arm, some simply astonishing groups soon began forming, over my 30 yard test range. In fact, it was soon clear that, if I did my bit, this gun would clearly do the rest, with sub ¼ inch groups perfectly possible. Quite superb in fact, despite a fairly noisy and twangy action, and a trigger unadjusted, and still left at the factory setting.

The HW77 continues to impress, and this Special Edition model is perhaps a fitting celebration of this all-time classic air rifle. Blistering accuracy, and great handling are a given, so if you are in the market for a snazzy looking, top-class adult Sporter, equally at home in the field or the national FT circuit, then this just has to be on the short list.